Heat vs Celtics Odds and Predictions, Will Celtics make it 3-3?

Heat vs Celtics Odds and Predictions, Will Celtics make it 3-3?

The Boston Celtics have given themselves some breathing space after securing a much-needed victory against the Miami Heat in the game 5 of the NBA Eastern Conference final.

The game started off pretty well for Heat as they went to a 11-5 lead in the first four minutes with the Celtics making one of nine field goal attempts with two turnovers. The Heat started running away to 17-5 but a streak of points for Boston put them just 4 points behind with just over 3 minutes left in the first quarter. The score-line read 26-18 in favor of Heat with Duncan Robinson dominating the proceedings with 12 points. For Celtics, Jayson Tatum managed just 3 points shooting 0-for-3 from the field. Jimmy Butler assumed the initiative for the Heat in the second quarter with six points, six rebounds and four assists giving them an early lead of 12 points. Jaylen Brown pitched in with a 3-pointer and a dunk to close the gap along with Jayson Tatum who became the first to hit the double digits for the team. Enes Kanter who came from the bench also gave 8 points, 4 rebounds and 2 assists in 10 minutes. But Heat’s early resurgence put them at 58-51 at half time.

The Celtics came out all guns blazing in the second half with a 9-2 run initially and extended it to a 20-3 run that put them at 71-63. Jayson Tatum was the savior with 17 points whereas Goran Dragic’s effort meant that the Heat were in touching distance with a 9-point advantage for Celtics. In the fourth quarter, the Celtics didn’t waste any time and went all-out again to jump to a 16-point lead that was helped by Jaylen Brown’s two 3-pointers. Despite trying to catch up, Heat failed to stop them from winning the game 5 with a comfortable 13-point margin.

Even though six players scored in double digits for Heat, only Goran Dragic and Duncan Robinson crossed the 20-point mark. Goran Dragic was the highest scorer for the team with 23 points, 4 rebounds and 4 assists. Duncan Robinson was exceptional in the first half but went numb in the second finishing with 20 points and 2 rebounds. Jimmy Butler put up an all-court performance of 17 points, 8 rebounds and 8 assists but that didn’t help their cause. Tyler Herro, Jae Crowder finished with 14 points each with the disappointing performance coming from Bam Adebayo who managed just 13 points in 38 minutes.

For Celtics, Jayson Tatum and Jaylen Brown gave a total of 59 points along with 18 rebounds and 8 assists. Daniel Theis and Kemba Walker supported with 15 points each while Gordon Hayward was rather silent with 10 points, 3 rebounds and 2 assists. Marcus Smart had a not so convincing day in the middle with just 12 points and 8 rebounds. 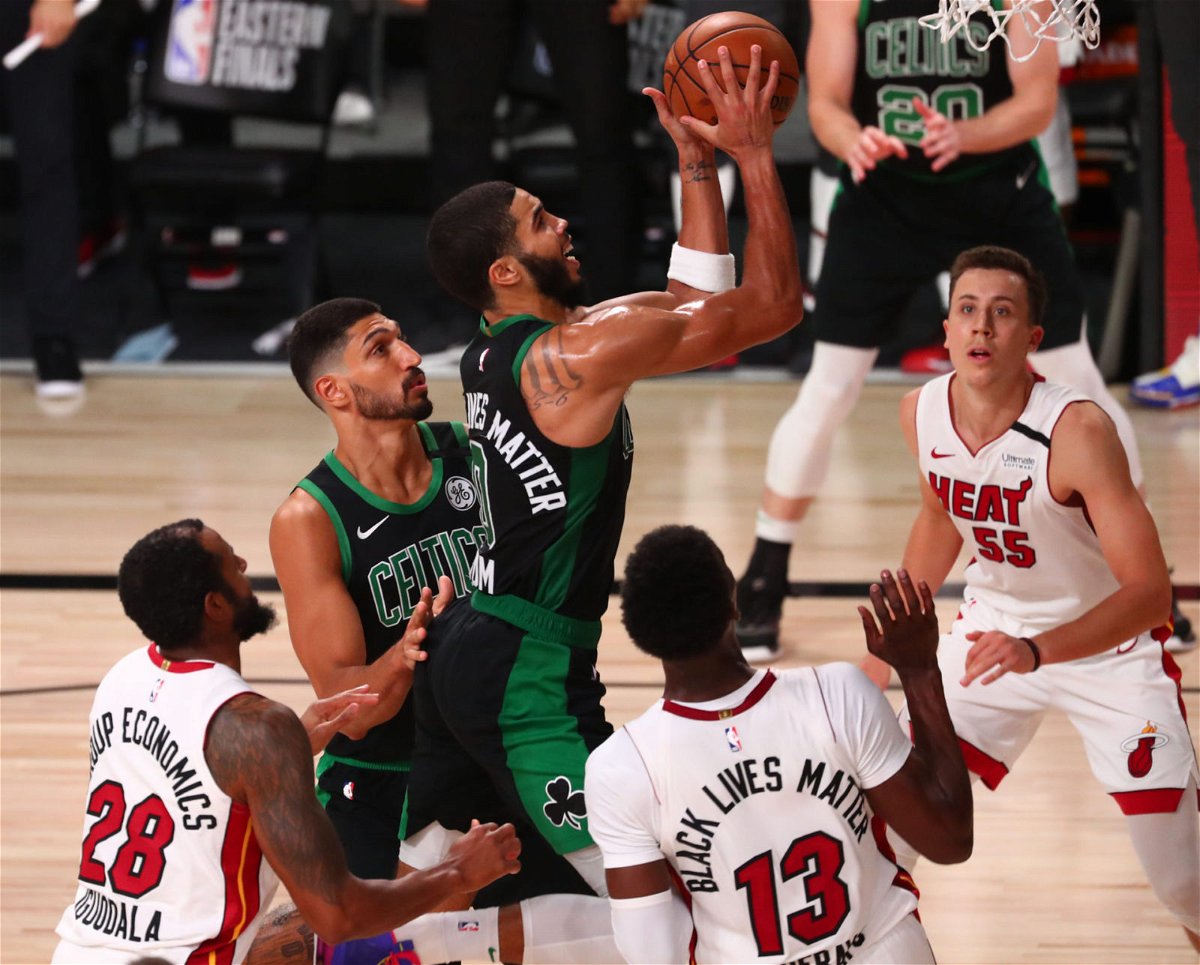 (Figures in brackets are from the game 4)

The game 6 of the eastern conference finals between Heat and Celtics is scheduled on Sunday 27th at 7 30 pm local time. The Celtics will go all out to equalise while Heat will try to close this and make it to the NBA Finals

With that crucial win, the Celtics are back at 2nd place as the favorites to win this year’s NBA with a 22% chance. On the other hand, the Heat chance which was in mid 60s yesterday has come down to 53% currently. The Lakers have dropped to 20% whereas Nuggets are still at 4% with a deciding game coming their way.

The Celtics have been in this situation before where they had to fend off the defending champions in the conference semis of the playoffs. Even though they know how to perform under extreme pressure they can no stone unturned on Sunday night with the Heat having their own issues of underperforming all of a sudden.

The head-to-head looks pretty tight now with 22 playoff matches played between the teams. Celtics are closing the gap with 10 wins but the Miami Heat still hold the edge with 12 wins. Another thing that is favoring them is that they have been undefeated when they face Celtics in a playoff series since 2010.