Mumbai Indians were shocked by Chennai Super Kings last night thanks to a superlative performance by Ambati Rayudu. In the final dream11 team last night, there were just 3 batsmen with FAF Du Plessis leading the pack. We had recommended FAF Du Plessis as dark horse captain yesterday

DC vs KXIP Dream11 Predictions Mumbai Indians were shocked by Chennai Super Kings last night thanks to a superlative performance by Ambati Rayudu. In the final dream11 team last night, there were just 3 batsmen with FAF Du Plessis leading the pack.

The Indian Premier League 2020 starts off with defending champions Mumbai Indians taking on the runners-up Chennai Super Kings. The match is scheduled today at the sheikh zayed stadium in Abu Dhabi.

The teams are determined by statistical models using previous year's IPL data. Given the long break since the last active cricket game for most players, the model is likely to be more inefficient than normal. During the last few games, the model has identified on an average 7 members who were part of the final Dream11 (9 should give you a big win). The final recommendations will be made after the final line ups are announced. Use your gut andd your research as well given that cricket is an highly uncertain game.

Get these 5 predictions right and win Amazon Vouchers

Here we list 22 players with their Dream 11 statistics from previous IPL season you can use these statistics to make a dream11 team prediction. We are also publishing Dark Horse Captains after reviewing Dream11 data

Quinton de Kock was impressive in last season of Indian Premier League. In 16 matches that he played in last season he averaged 35.26 run per match. With 529 runs he delivered an average of 51 Dream 11 Fantasy points per match in last IPL season.

Mahendra Singh Dhoni, the most successful captain in IPL history will be one of the best choice as Dream 11 wicket keeper. In last IPL he has 5 stumping and 11 catches behind the stumps. With total of 416 runs he delivered an average of 43.66 points in last IPL season. 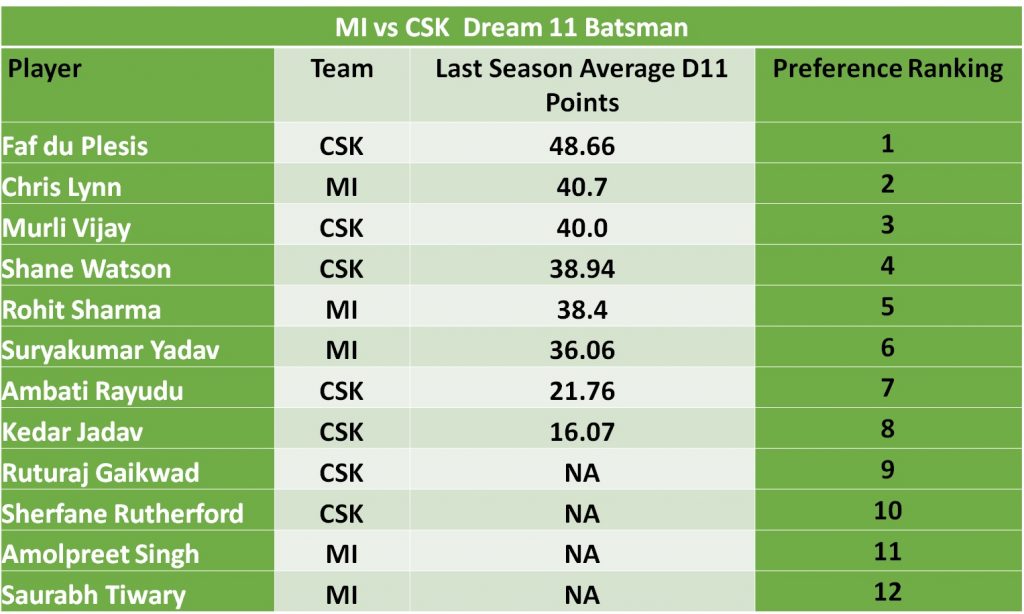 Chris Lynn, hitman Rohit Sharma and Suryakumar Yadav will be the top picks amongst Mumbai Indians. At the moment, Yadav is ahead of Lynn on Dream 11 player selections.

Faf du Plessis, Shane Watson and Rayudu are the top picks amongst the Chennai Super Kings. Kedar Jadhav is being preferred over Murali Vijay.

Sherfane Rutherford and Ruturaj Gaikwad could be the surprises from CSK in this tournament.

CSK will miss the services of superstar Suresh Raina who has dropped out due to personal reasons. Crowdwisdom360's poll suggested that the absence of Raina has pushed CSK to the 5th position in terms of chances of winning the IPL this year. 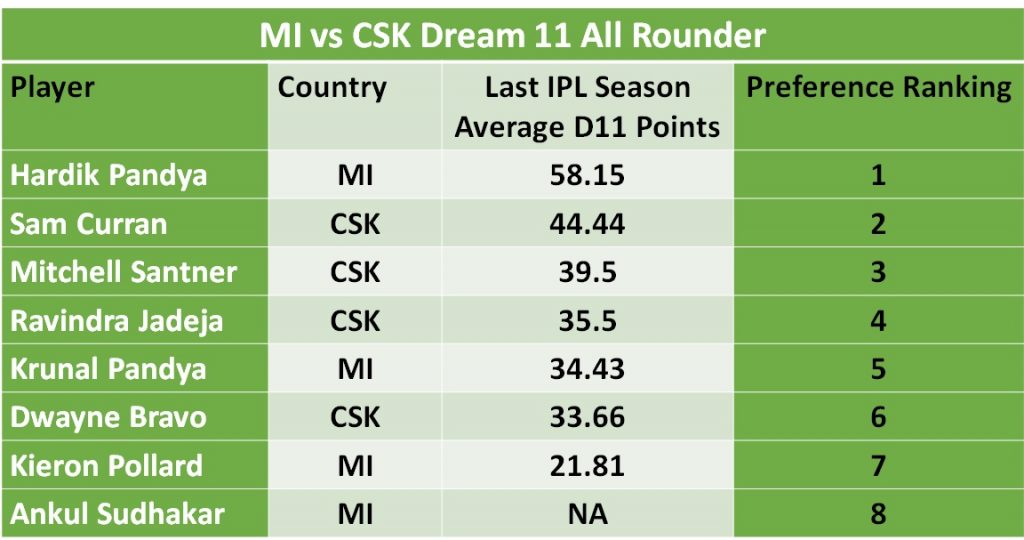 Hardik Pandya is the most valuable players in this game with 58.1 points per match in last IPL season. He is currently the third most preferred choice for Captain after Rohit Sharma and Quinton De Kock.

The English all rounder Sam Curran will also be part of CSK team. He has been very much with his bat and bowl this year for his national team. He delivered 44.44 average Dream11 fantasy points in 10 matches that he played in last season. However, he is unlikely to be available for the game today.

Krunal Pandya is another strong all rounder for Mumbai Indians. However, he ranks low in terms of fantasy points and has currently been selected by just 18% of Dream11 participants. Dwayne Bravo and Kieron Pollard were in great form during CPL 2020. Pollard is the 2nd most selected all rounder while Bravo is the 4th most preferred all rounder.

Ravindra Jadeja from CSK might be part of almost all Dream 11 teams even in this years IPL tournaments. In last season he scored 106 runs and took 15 wickets in 16 matches. He delivered an average of 35.5 fantasy points per game.

Mitchell Mcclenaghan for Mumbai Indians and Karn Sharma and Lungi Ngidi for Chennai Super Kings could be the X-factor. Ngidi is most preferred amongst the three.

Josh Hazlewood had a pretty good series in England and will be all fired up for IPL 2020. It is unlikely he will be available today due to quarantine.