To Read about Today's game between KXIP and RCB, Please click here

Mumbai Indians were shocked by Chennai Super Kings last night thanks to a superlative performance by Ambati Rayudu. In the final dream11 team last night, there were just 3 batsmen with FAF Du Plessis leading the pack. We had recommended FAF Du Plessis as dark horse captain yesterday

All recommendations are as per statistical analysis. However, it is almost impossible to predict a player's performance on a given day. Use your own research as well.

We would recommend dropping 1 Batsman (Ajinkya Rahane) and including Glenn Maxwell if he gets to play.

Captaincy Dark Horses include Rishabh Pant, Kagiso Rabada and Marcus Stoinis if he gets to play

Current Team Predicted (as per Dream11)

KL Rahul or Lokesh Rahul scored 593 runs in the last season along with a hundred and six fifties in the tournament. He was also quick and flexible behind the stumps for Punjab.

Rishabh Pant scored 488 runs in 2019 season which included three half-centuries at a strike rate of 162.66. His record as wicket keeper is impeccable with 18 catches and 6 stumpings. 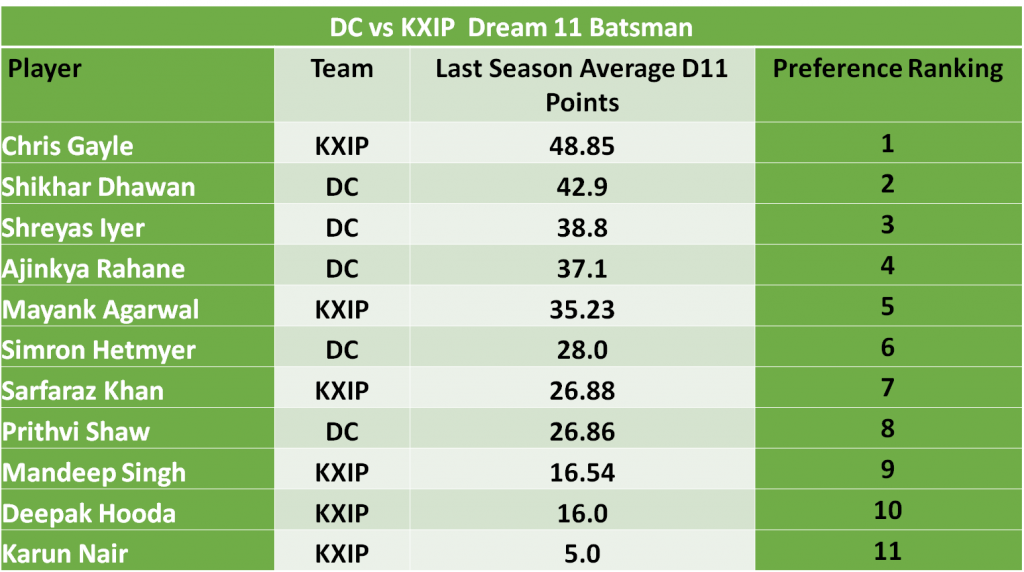 Chris Gayle had a good 2019 season at the top order with close to 500 runs at a strike rate of 153.60. He also scored four half centuries and provided excellent starts for the team. Shikhar Dhawan had an excellent season for Delhi after coming from Hyderabad by scoring 521 runs in the season. He scored five fifties at a strike rate of 135.67 and will be looking to get back to business this time too.

Shreyas Iyer was an excellent captain for the Delhi team by taking the team to play-offs after seven years. He was also a quality middle order batsman in the 2019 season with 463 runs at a strike rate close to 120. Ajinkya Rahane ended last season with an average of almost 38 runs when he scored a total of 393 runs which included 1 century and a half century.

Mayank Agarwal is a quality player of spinner and with the slowness of the wicket, he will play a key role in Punjab’s success. The left-handed batsman, Shimron Hetmyer, who had played for Royal Challengers Bangalore in IPL 2019, made his way to Delhi Capitals after being bought for INR 7.75 crores for the IPL 2020.

Keemo Paul was part of Delhi's Playing XI only on 8 occasions. However, he delivered an average of 35.8 Dream11 points per match in last season. Axar Patel can strike at more than 125 and can consistently provide four overs every match. With slowness in the pitch, someone like Axar can bowl slowly through the air and pick wickets. 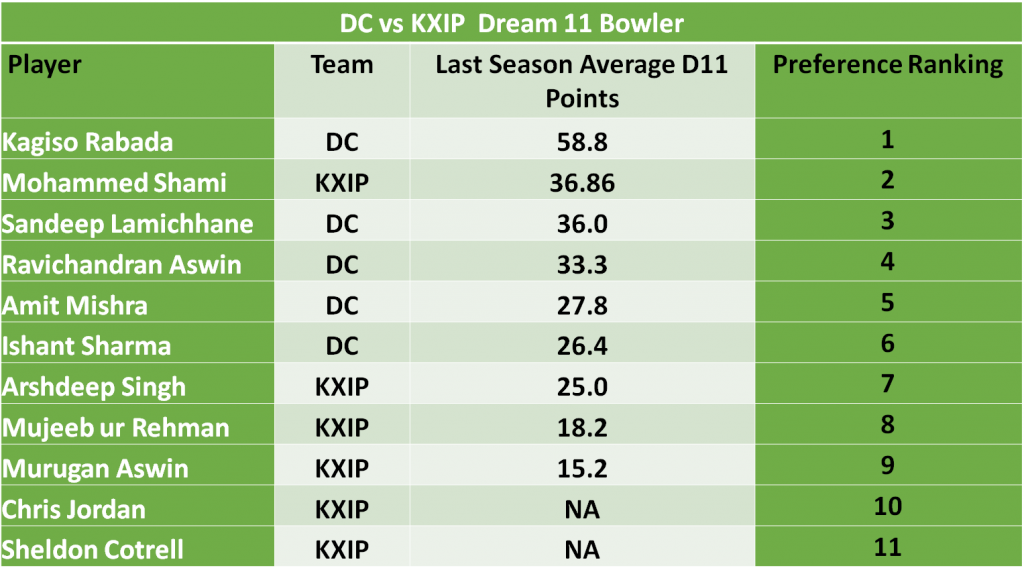 Kagiso Rabada had an exceptional IPL 2019 with 25 wickets at an economy of 7.82 and two 4-wicket hauls. He was good with the new ball and nailed his yorkers at the death. He provided an astounding 58.8 fantasy points per match last season.

Mohammad Shami will lead the pace attack for Punjab as he did in 2019. Even though he is a little bit on the expensive side, he has compensated that by taking important breakthroughs.

Kings XI traded Ashwin for 1.5 crores and jagadeesha Suchith. They will now have to face Ravichandran Ashwin in the very first match. He picked 15 wickets for Punjab last season and is someone who wants to start the innings off with the spin that in turn helps in taking wickets. He will be an important candidate given that he likes to flight the ball and try out his variations on a turning pitch.

Amit Mishra is one of the few to have 150+ wickets in the whole tournament and can bamboozle the batsman with his leg breaks. With assist from the pitch in UAE, he can run past any batting line-up. Ishant Sharma is good with the new ball but can often bleed runs at the death with his hard lengths. It seems that he has developed cutters recently that might make him effective all-round.

Arshdeep Singh was a star in the U-19 team and managed to play just three matches where he picked up 3 wickets. Mujeeb Ur Rehman in 2018 who was it his very best and used to deceive the batsmen with his variations. Murugan Ashwin is leg break bowler like him can always make an impact in the outcome of a game. Watch out for young leg spinner Ravi Bishnoi and the tall Ishan Porel who could be the surprise packages tonight.