KKR vs SRH Dream11 Team Predictions : Kolkata Knight Riders will face Sunrisers Hyderabad tonight at the Sheikh Zayed stadium in Abu Dhabi. It will be the 2nd match of IPL 2020 for both the teams.

Players who performed poorly in IPL 2020 (one game) and also in IPL 2019, Below 30 fantasy points in both seasons

Average Dream11 Fantasy Points by All Rounders and Wicket Keepers at Abu Dhabi: 36

Mitch Marsh will not be available for rest of IPL. Kane Williamson is likely to play for SRH

Here we list the Dream11 statistics of each players from last IPL season along with last match Dream11 points. We ensure that our statistically tested Dream 11 for IPL 2020 match of KKR vs SRH will be made available on the day of the game including the inclusions of captains and vice captains. Final team will be posted after the toss when playing XI is announced.

Jonny Bairstow was the second highest scorer for SRH in last IPL season. He played just ten matches and delivered an average 65.7 Dream 11 points. In his first match of IPL 2020 he was outstanding. Jonny Bairstow is surely the first choice wicketkeeper.

Dinesh Karthik KKR's captain didn't have a great season last year. With just 7 catches  and 253 runs, he would like to show his best and lead from the front. In first match of this season IPL he delivered 39 Dream11 points.

Nikhil Naik who played a single match last season and scored 7 runs was given an opportunity in KKR's very first of IPL 2020 season. He is failed to deliver in his 1st match of IPL 2020. 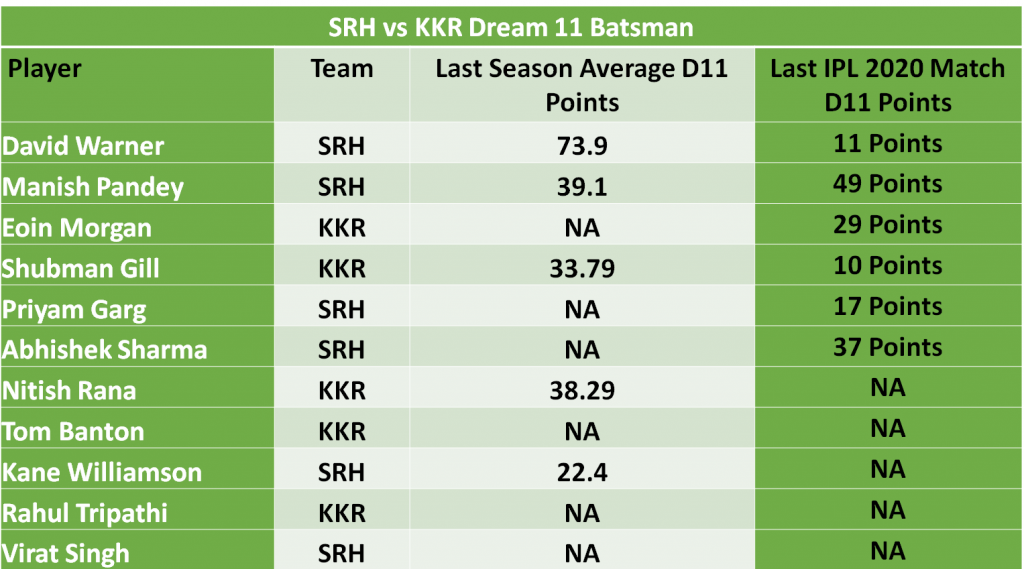 SRH David Warner who played just 12 matches last season, scored 692 runs and was the orange cap winner. He had an awesome last IPL season. However, David Warner is struggling with his bat this year. He did not have a good series against England and in IPL2020 in his very first match he delivered only 11 Dream11 Points.

Manish Pandey is the glue that holds SRH's middle order. Known for his stupendous knocks, Pandey had an average 39.1 Dream 11 fantasy points in the last season. He is a reliable Dream11 batsman and even in last match he successfully delivered 49 Dream11 points.

Shubman Gill is one of the most reliable batsman in KKR. According to team's requirement, this young batsman can open the batting or come one down. Last season, he scored 296 runs with an average 33.79 Dream 11 points.

SRH experimented with two young guns in their 1st match of IPL2020, Priyam Garg and Abhishek Sharma. Priyam could not deliver much but Abhishek showed his potential as a batsman. Together they added 54 Dream11 points in last match.

English limited overs captain, Eoin Morgan's experience will be handy for KKR this season. He can be a good bet as a Dream11 batsman. In his 1st match of IPL 2020 he was able to deliver 29 Dream11 points

Kane Williamson may be part of SRH's Playing XI for today's match. If he is included in the team, he can be one of the best bets as a Dream11 batsman. In last IPL seson he had an average of 22.4 Dream11 points per match.

KKR vs SRH Dream11 Team Predictions : All Rounders for IPL 2020 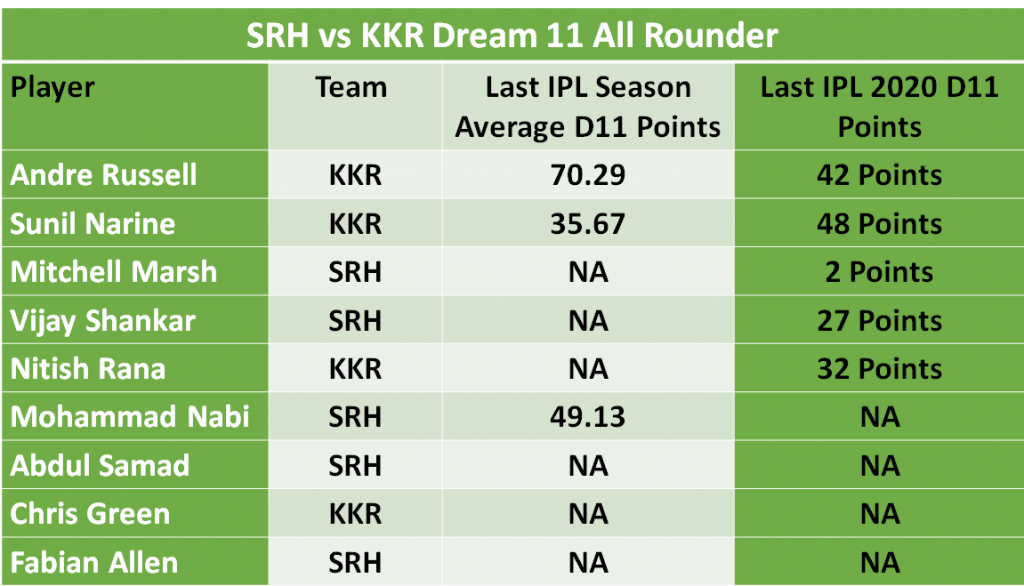 Kolkata went with 3 all rounders and none disappointed. Andre Russell will be the 1st choice as Dream11 all-rounder. He was impressive in last IPL season and even last match he could deliver 42 Dream11 points.

Sunil Narine will be someone who can be relied upon to perform in any circumstances. He can be preferred as a 3rd all-rounder as he has a good IPL records. He delivered an average of almost 36 points per match in last IPL season.

Nitish Rane too can be preferred as a Dream11 all-rounder. In his 1st match of this season's IPL he delivered 32 Dream11 points.

Vijay Shankar continued his role just like the previous season where he had an average 25.6 Dream 11 fantasy points. He delivered 27 Dream11 points in last match. 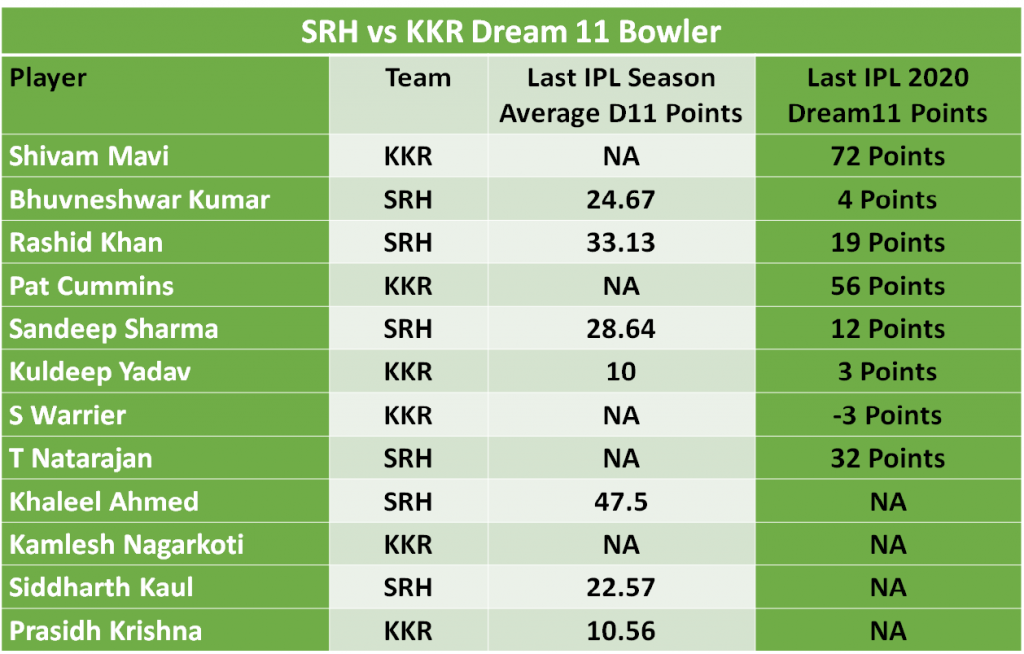 Bhuvneshwar Kumar had a good last season where he picked up 16 wickets and had an average 24.67 D11 fantasy points. He can be relied upon as a Dream11 bowler though in his 1st IPL2020 match he could not deliver much.

Next to Bhuvaneswar Kumar will be Shivam Mavi who can be trusted as a bowler. In his very first match of IPL2020 he delivered an impressive 72 Dream11 points.

Pat Cummins from KKR is other bowler who you cannot miss. Pat Cummins had an impressive series against England. He is new to IPL but is one of those bowlers who can perform under any circumstances. In first match he gave 56 Dream11 points.

Rashid Khan will be their strike bowler, just like the last season where he had an average of 33.13 D11 fantasy points per match. He is one of the reliable Dream11 bowler who can sometimes even deliver with his bat.

Kuldeep Yadav and Sandeep Warrier failed to perform in their 1st matches of IPL 2020. Combined together they failed to deliver any Dream11 points in last match of this season.