RR vs KKR Dream11 Predictions : RR will play against KKR at the Dubai international stadium on 30th September. Both the teams have a strong and formidable batting line-up, thus making the bowling of both teams as a deciding factor.

This will be the 3rd match for both Rajasthan Royals and Kolkata Knight Riders in IPL 2020 season.

Here we list players with their Dream 11 points from previous IPL season along with last match Dream11 points delivered by them.

We ensure that our statistically tested Dream 11 teams will be made available on the day of the game including the inclusions of captains and vice captains. Final team will be posted after the toss when playing XI is announced.

Sanju Samson will be a great pick as a wicket keeper. He already has two stumpings in his name in his 1st match in IPL2020 against CSK. Last season he had an above average season, with an average 37.66 D11 fantasy points per match and in first match he delivered a whopping 145 Dream11 points.

KKR's captain Dinesh Karthik did not have a good last season. He had an average 26.79 Dream 11 points in last IPL season. Even in 1st match of of IPL2020 he delivered only 39 points.

Nikhil Naik too got an opportunity in 1st IPL 2020 match of KKR. However, he could not impress much. He gave just 13 Dream11 pints in his 1st match of this season. 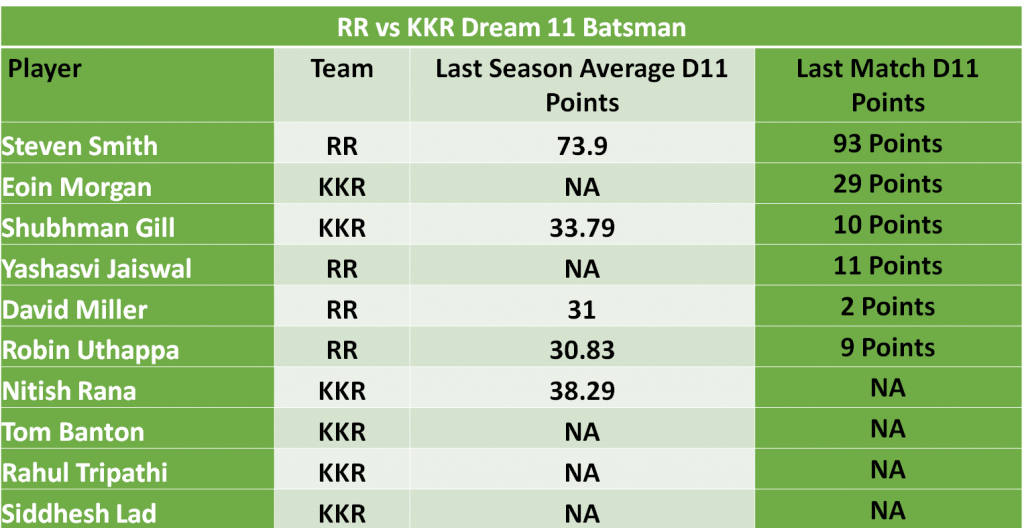 Except Steven Smith most of the batsman of Rajasthan Royals failed to deliver in their 1st match of this IPL season. Steve Smith had a very high average Dream11 points in last IPL season and even against CSK he proved his might. He will be first choice as a Dream11 batsman.

Eoin Morgan is not having a good cricketing 2020 season. He is exceptional batsman but is unreliable as a Dream11 batsman due to his form in last few matches. In last match he delivered 29 Dream11 points.

Talented Shubham Gill scored 296 runs with an average 33.79 Dream 11 points in last IPL season. He can be the 2nd option as a Dream11 batsman after Steve Smith. In first match he gave only 10 Dream11 points.

Yashashvi Jaiswal and David Miller both got opportunity to be part of Rajasthan Royal's Playing XI against CSK. David Miller had a good last IPL season and can be relied upon though he delivered only 2 Dream11 points in his 1st match of IPL 2020.

Yashashvi Jasiwal can also be preferred but he has a less IPL experience. He added only 11 Dream11 points in last match.

Robin Uthappa is a new additon to RR team. Robin Uthappa played for KKR last season with an average 30.83 D11 fantasy points per match. He can be taken as an option for Dream11 batsman.

Kolkata went with 3 all rounders and none disappointed. Andre Russell will be the 1st choice as Dream11 all-rounder. He was impressive in last IPL season and even last match he could deliver 42 Dream11 points.

Rahul Tewatia would be the 2nd choice as Dream11 all-rounder. Last season he played only 5 matches and could deliver an average of 25.6 Dream11 points. He is impressive with both bat and ball. In last match he delivered a whopping 88 points making himself hard to be missed in in Dream11 all-rounders list.

Sunil Narine will be someone who can be relied upon to perform in any circumstances. He can be preferred as a 3rd all-rounder as he has a good IPL records. He delivered an average of almost 36 points per match in last IPL season.

Nitish Rane and Riyan Parag might not have been much impressive in theirs IPL2020 opening match but has a potential to perform. If not the above ones, Dream11 players can consider these young all-rounders. 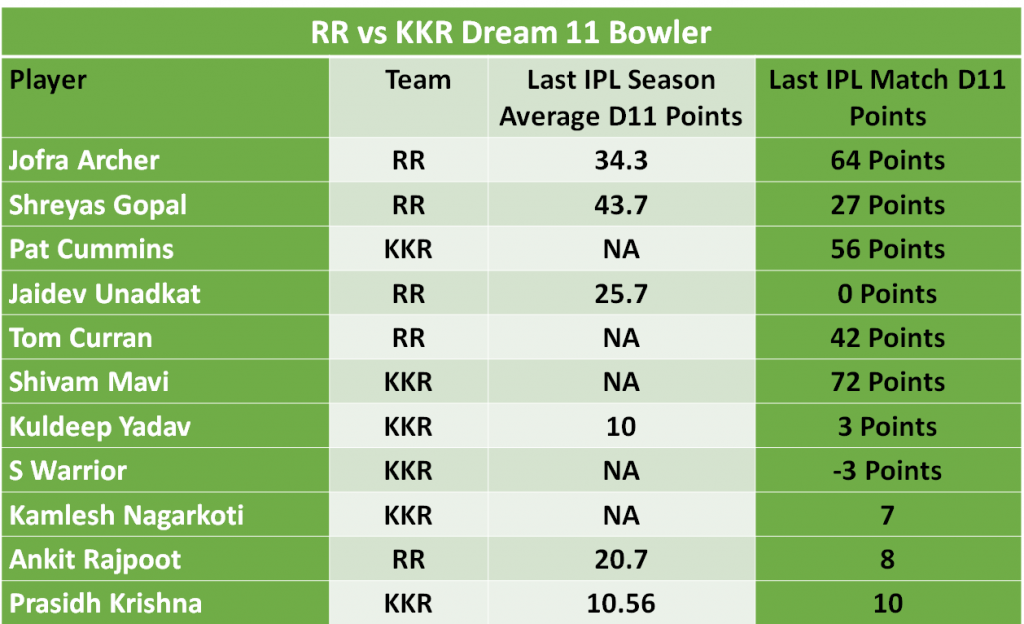 Jofra Archer will be the 1st choice as a Dream11 bowler followed by KKR's Shivam Mavi. Both the players were outstanding in their 1st IPL 2020 match. Jofra was able to impress even with his bat. Jofra delivered 64 Dream11 points while Shivam Mavi delivered 72 Dream11 points.

Next to Jofra and Shivam will be Pat Cummins who had an impressive series against England. He is new to IPL but is one of those bowlers who can perform under any circumstances. In first match he gave 56 Dream11 points.

Tom Curran is the other impressive bowler from England. He did not play in last IPL season but is a reliable choice as a bowler.

Jaidev Undakat, Kuldeep Yadav and Sandeep Warrier failed to perform in their 1st matches of IPL 2020. Combined together they failed to deliver any Dream11 points in last match of this season. All the three players are not a reliable options as Dream11 bowlers.