Defending champions MI have played their first two matches. They lost the opening El Classico of IPL against CSK. But they did make a brilliant comeback in their second match against KKR. They will play against RCB before facing KXIP.

Similar is the case of KXIP. They lost their first match to DC in the super over. They too made a brilliant comeback and won their second match against RCB. They will face RR before facing MI.

Here we have listed 22 players with their Dream 11 points from previous IPL season along with IPL2020 matches. Go through these statistics to make a good Dream 11 team.

We ensure that our statistically tested Dream 11 teams will be made available on the day of the game including the inclusions of captains and vice captains. Final team will be posted after the toss when playing XI is announced.

Proteas wicketkeeper batsman Quinton de Kock will be MI's first choice wicketkeeper. He brings in left-right hand combination in the opening duo. He has an average of 51 Dream 11 Fantasy points per match in last IPL season. In the first match of IPL 2020 De Kock contributed 42 Dream11 points. In the second match he had 33 D11 points to his name.

KL Rahul will be the Mahi of KXIP with an additional role of opening the innings. He is in excellent form and will be a player to watch out for. Rahul has 269 D11 fantasy points to his name in just his first two matches that is an average of 134.5 Dream11 points.

Nicholas Pooran has had a bad IPL season till now and may be dropped over the Universe Boss. Pooran has just 30 D11 fantasy points in both the matches that he featured.

Prabhsimran Singh is another wicketkeeping option for KXIP. 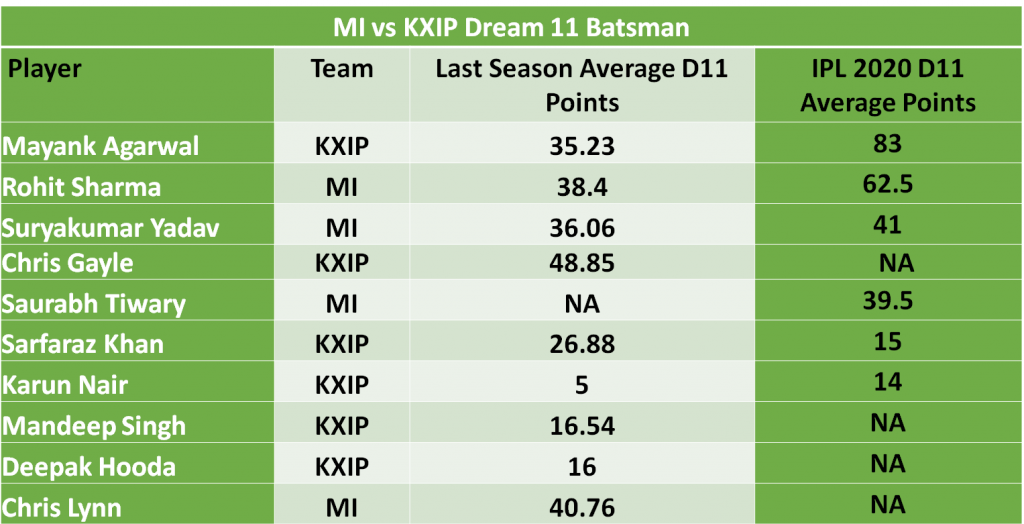 Indian vice-captain Hitman scored a total of 405 runs in 15 matches that he played last season. He is the first choice as a Dream11 batsman. He had 18 D11 points in the first match. In the second match though he had 107 D11 fantasy points.

Suryakumar Yadav plays the role of accelerator and anchor for MI in the middle overs. SKY has 82 D11 fantasy points in the first two matches.

Saurabh Tiwary is a dynamic southpaw who is entrusted the responsibility to anchor the innings along with SKY. He already has 79 D11 fantasy points in the first two matches.

Mayank Agarwal is in an excellent form. He almost single-handedly won them the match against DC. He already has 166 D11 fantasy points this season.

Sarfaraz Khan has played the first two games. He has only 30 D11 fantasy points, this season. He is not a reliable Dream11 batsman.

Pandya brothers will surely play for MI. The two brothers are good choice as a Dream11 all-rounders. Hardik Pandya has 72 D11 points in his first two games. Krunal Pandya had a mediocre last season with only 183 runs and 12 wickets. In IPL 2020 Krunal has 35 D11 fantasy points to his name in his first two matches.

Kieron Pollard is in a good form and had a phenomenal CPL. He is one of the best bet as a Dream11 all-rounder. Pollard has bowled this season and has 76 D11 points in his first two matches.

Krishnappa Gowtham had a forgettable last season for RR  with just a single wicket in the seven matches that he played. He had a very bad season with the bat too. He did feature in the first match but was dropped for the second one.

Kiwi all-rounder Jimmy Neesham played the second match of KXIP. Though he didn't get an opportunity with bat, he did bowl good couple of overs.

Glenn Maxwell is back after a brief hiatus from cricket. He hasn't batted upto his capabilities but has bowled quite well against RCB. He has 41 D11 fantasy points to his name in the first two matches.

English bowling all-rounder Chris Jordan did feature in the first match against DC. He was blamed for the loss against DC by the fans and was subsequently dropped in the next match. 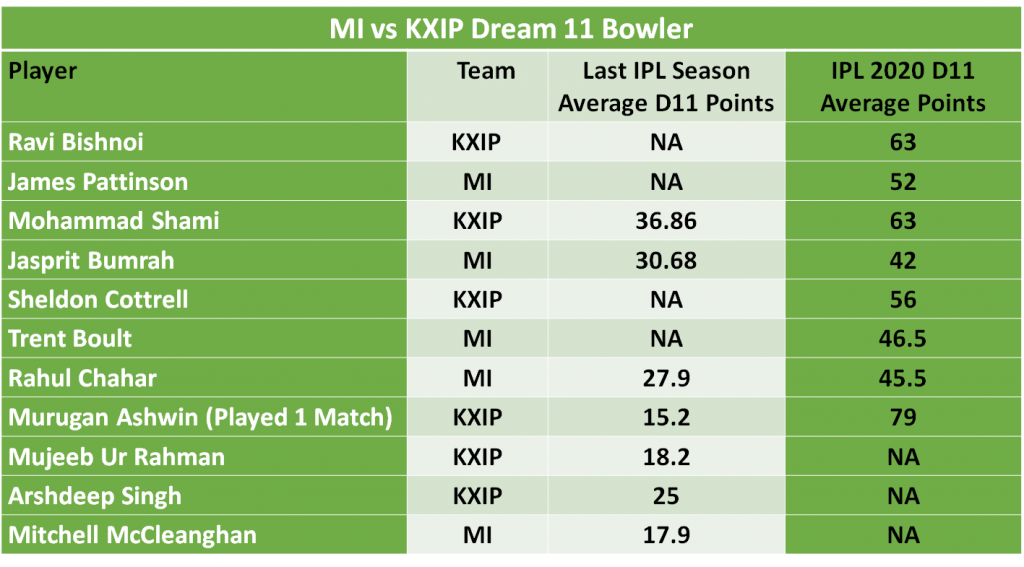 Both the teams have the best bowling line-ups.

Rahul Chahar will be MI's lead spinner and one of the best bet as a Dream11 bowler. He had an average 27.9 Dream 11 fantasy points per game in the last season. This season, he has 91 D11 fantasy points in the first two matches.

With Anil Kumble as the coach, the leggies have been a treat for KXIP.  Leg spin duo Murugan Ashwin and Ravi Bishnoi rattled the middle order of RCB.

Sheldon Cottrell has always been great with the new ball. He along with Shami forms a lethal combination with the bowl. Cottrell has 112 D11 fantasy points in the first two matches.