Rajasthan Royals will play their 2nd Indian Premier league (IPL 2020) match against Kings XI Punjab tonight at the Sharjah cricket stadium. This will be KXIP's third match this season.

RR won a high scoring match against Chennai Super Kings at the Sharjah International stadium. KXIP lost their first match against DC in the super over. However, they trashed Royal Challenges Bangalore in their second match and won by 97 runs. They played both their matches at Dubai cricket stadium.

This will be KXIP's first match Sharjah cricket stadium

Final teams will be posted after the toss when playing XI is announced. There are no guarantees in this analysis but we use statistical analysis to find teams that will perform well.

Top Performers for both teams in IPL 2020 so far and also performed reasonably well in IPL 2019 or did not feature : (RR has played only one game)

Players who performed poorly in IPL 2020 so far and also in IPL 2019, Below 30 fantasy points in both the seasons

Jos Buttler will be back for Rajasthan Royals, David Miller may lose out

Jaydev Unadkat will replaced either by Varun Aaron or Kartik Tyagi

Average Dream11 Fantasy Points Scored by Batsmen/WK in Sharjah in IPL 2020 (One match): 49

Average Dream11 Fantasy Points Scored by Bowlers in Sharjah in IPL 2020 (One match): 32

Average Dream11 Fantasy Points Scored by All Rounders in Sharjah in IPL 2020 (One match): 51

Here we list the Dream11 statistics of each players from last IPL season along with last match Dream11 points.

Skipper KL Rahul was the highest scorer for KXIP in last IPL season. He delivered an average 59 Dream 11 points. Sanju Samson had a marvelous last IPL season. Talking about this season, he led from the front and destroyed the bowling of CSK.

Mayank Agarwal delivered an average of about 35 Dream 11 points in IPL 2019 and had fantastic first two matches of IPL 2020.  Steven Smith skipper of RR had an excellent first game and is in great form. Young Yashasvi Jaiswal failed in the first match but is likely to retain his position.

RR vs KXIP Dream11 Team Predictions : All Rounders for IPL 2020

Rahul Tewatia bowled quite well against CSK. He was good with his wrong ones and picked up three wickets against CSK.

None of the other all rounders had much to show as performance but it is certain Glenn Maxwell will retain his position in the team. Riyan Parag may get another shot. It is unclear if Krishnappa Gowtham will be brought back for this match. 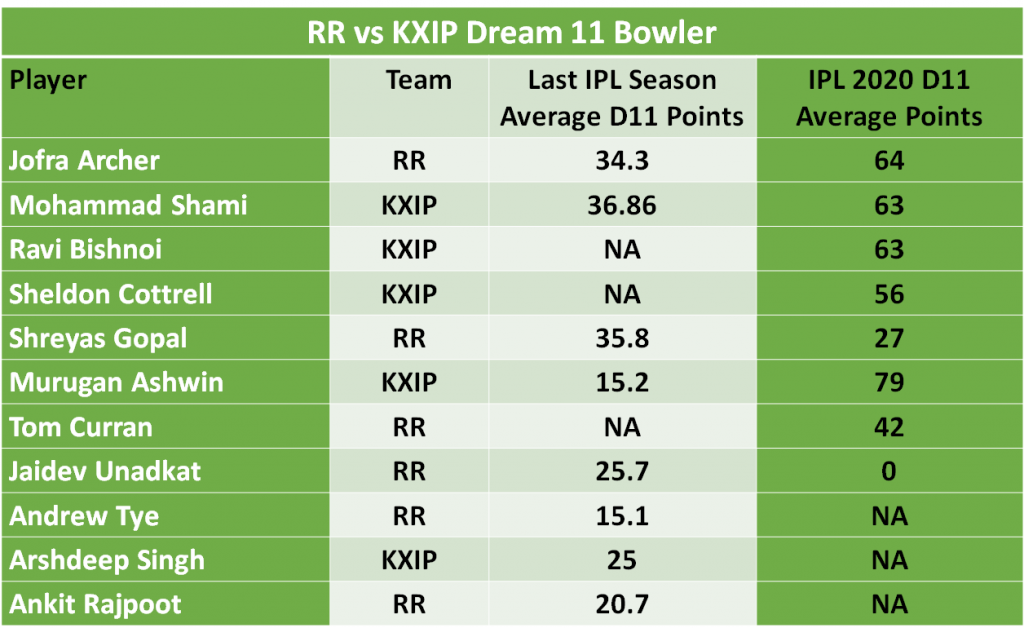 Jofra Archer had a good last IPL season. He was most economical bowler for RR. Tom Curran played his debut IPL match and was quite good until the last over where Dhoni smashed him for 3 sixes.