MI vs KXIP Dream11 Team Predictions: With 3rd with of Indian Premier League (IPL) starting from Monday, last year champions MI will play against KXIP on 1st October at the Sheikh Zayed stadium, Abu Dhabi. This will be fourth IPL 2020 match for both the teams.

MI and KXIP, both the teams have lost their first and third matches and won their second match.

MI has one of the best batting and bowling lineup with Rohit Sharma and De Kock opening the innings. Middle order looks stable with the likes of Suryakumar Yadav, Ishan Kishan, Saurabh Tiwary.

Pandya brothers and Pollard give MI the fire power to their batting line-up. Bowling line-up comprises of pace trio of Bumrah, Boult and Pattinson. Rahul Chahar is the lone leggie in the team.

KXIP have a balanced line-up both with ball and bat. Though their middle order looks a bit weak. But the shear brilliance of the opening pair has covered their weakness. Their bowling lineup is quite formidable.

KL Rahul and Mayank Agarwal are the top scorers of the tournament so far.

Mumbai Indians camp found a new hero in the form of Ishan Kishan. Hitman played a good knock against KKR and won the MOM.

Suryakumar Yadav played two good cameos in the first two matches while Pollard scored a flamboyant half century last match. Trent Boult and Rahul Chahar have been quite consistent with the ball.

Mayank Agrawal, KL Rahul and Rohit Sharma are the best options for Captain or Vice Captain as they are in brilliant form.

The best combination would be 2 WKs, 3 Batsmen, 2 All Rounder and 4 Bowlers

MI vs KXIP Dream11 Team Predictions : Top Performers for both teams in IPL 2020

KL Rahul will be the first choice as Dream11 wicketkeeper. He is having an exceptional IPL2020 season till date. With over 122 Dream11 points per match this year one cannot ignore him in their Dream11 team.

The best combination for 2 wicket keepers in Dream11 team can include the young Ishan Kishan who impressed with his batting in very first match in IPL2020 against Royal Challengers Bangalore. He along with KL Rahul will be the best catch as Dream11 Wicketkeepers.

Quinton De Kock and Nicolas Pooran both have failed to perform in this season's IPL. They will be a risky picks. 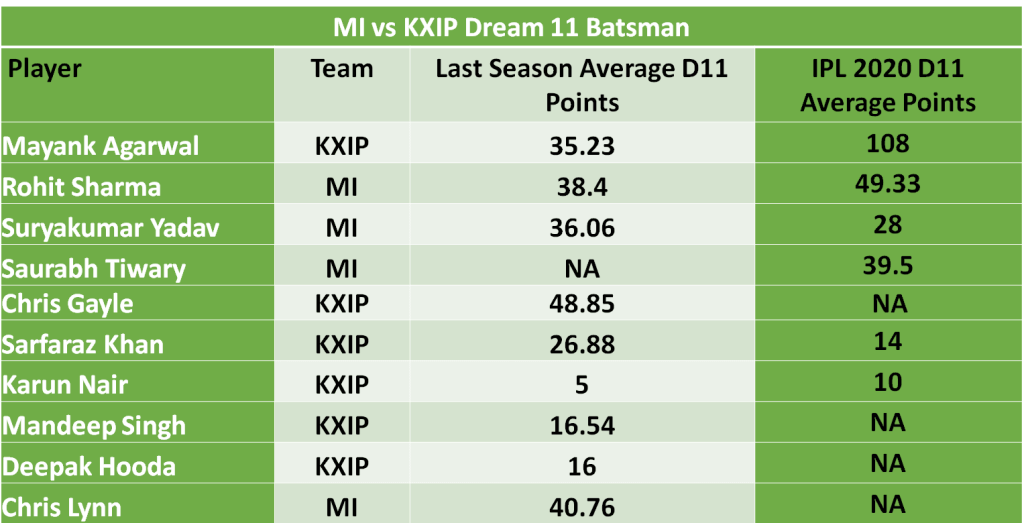 Mayank Agarwal is an ideal choice for the first Dream11 batsman. He has delivered an average 108 Dream11 points in this IPL season. He is the second highest run scorer in this tournament. Along with him Rohit Sharma will be the best option as Dream11 batsman.

Apart from them Saurabh Tiwari and Suryakumar Yadav have had a decent IPL2020 season. Though risky one can have anyone of the two a s third Dream11 batsman.

As an all-rounder, Mumbai Indian's Kieron Pollard will the best choice as Dream11 all-rounder. He has performed with his bat in almost all the matches of this season's IPL. Hardik Pandya can accompany him as a Dream11 all-rounder. Pandya is yet to return to his last year's form but he has been delivering 31 Dream11 points per match in IPL2020.

From Krunal Pandya to Jimmy Neesham to Glenn Maxwell, all have failed till now in this year's IPL. Picking anyone of them as Dream11 all-rounder will be a risky choice. 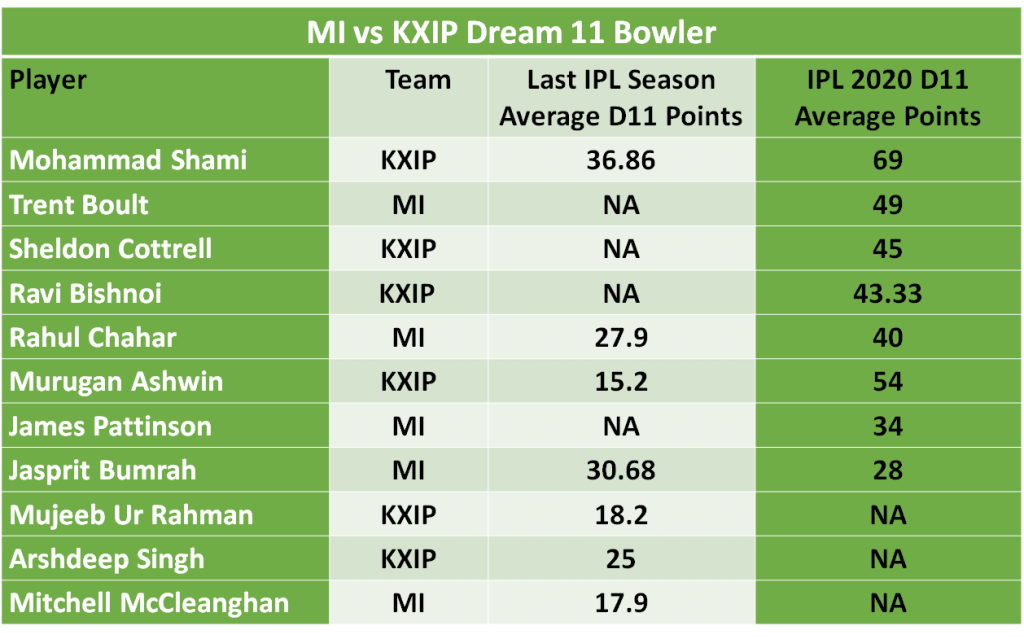 Most of the bowlers from both the teams have performed well in this season's IPL. Mohammad Shami is a sure pick in any Dream 11 side. He has had a great outing with the ball. He has an average 69 Dream 11 points.

Boult and Chahar are the best picks from MI. They both have bowled consistently well. Together they have added 89 Dream11 points per match in this season's IPL.

Sheldon Cottrell had a bad outing against Rajasthan Royals. He performed brilliantly in the first two matches and has an average 45 Dream 11 points. But in Match against RR he was quite expensive. He too can be a good pick as Drea11 bowler.

Leg spin duo Murugan Ashwin and Ravi Bishnoi have performed very well for Kings XI Punjab. Though Ashwin has played just two matches, he has a better average than Bishnoi.

While Pattinson did bowl well in the first two matches, he failed against RCB.

Bumrah hasn't bowled upto his calibre and will surely look to rattle the KXIP batting line-up. He is quite risky pick as a Dream11 bowler.