CSK vs SRH Dream11 Team Predictions : Cricket's best Premier league, IPL 2020 is just about to complete two weeks and we have already witnessed some nail-biting matches.

Chennai Super Kings are up against Sunrisers Hyderabad on 2nd October at the Dubai international stadium. This will be fourth match for both the teams.

CSK have lost their last two matches while SRH pounced back in their last match against the formidable Delhi Capitals and won their first match in this IPL season.

This Southern Derby will a treat for the fans as Thala has always played well against SRH. While SRH will like to continue their winning momentum.

1. Openers and One down have done well - Jonny Bairstow, David Warner, Manish Pandey and Du Plessis will be top picks (4)

Chennai Super Kings and Sunrisers Hyderabad don't really have the best batting line-ups but have few key batsmen who on their day can single-handedly win the match for their team.

CSK is missing Suresh Raina very badly. Lack of stability in middle order has been exploited well by the opposition. Opening pair of CSK has failed in each and every match and the team is heavily dependent on FAF Du Plessis in the batting department.

Rayudu will be back in the playing XI and will bring the much needed stability in the middle order. Lack of sixth bowler has been a concern for CSK but with the likes of Imran Tahir and Dwayne Bravo still on bench, CSK can still alter their Playing XI.

SRH have found stability with the inclusion of Kane Williamson. They have one of the best opening pairs and in-form one down and two down batsmen.

Abdul Samad can fill-in the role of finisher for SRH. Though SRH lack an experienced finisher which can hurt them in tensed run chases. SRH has arguably the best bowling line-up with the best Indian pace battery and the Afghan X-factor.

Warner and Bairstow are back in-form. Manish Pandey and Kane Williamson have played good cameos. Abdul Samad and Abhishek Sharma have looked promising.

Bhuvneshwar Kumar and Rashid Khan have found their lost form. Natrajan has looked promising with the ball.

In the camp of CSK, Faf Du Plessis has scored 173 runs in three matches and is the only batsman who has scored above 100 runs in the CSK camp. In bowling department, CSK don't have a consistent performer though Chahar and Chawla have shined with the ball.

David Warner, Jonny Bairstow and FAF Du Plessis, Sam Curran are the best options for Captain or Vice Captain as they are in brilliant form.

The best combination would be 1 WK, 5 Batsmen, 1 All Rounder and 4 Bowlers

CSK vs SRH Dream11 Team Predictions : Top Performers for both teams in IPL 2020

If you're following Dream11 predictions for a long time, then you surely know that some risks do play off. Just like the inclusion of Ishan Kishan in Dream 11 team against RCB would have done.

When you choose a team for fantasy cricket try to pickup some risky non-performing players too.

Confirmed! No comeback for Suresh Raina as Chennai Super Kings remove his name from official website

Jonny Bairstow is the highest run scorer for SRH. He is quite dependable as Dream11 wicketkeeper and should be the first choice as D11 wicket keeper. He has an average 63.67 Dream 11 points in this season's IPL.

MS Dhoni hasn't performed well, this IPL season. Apart from the back-to-back three sixes to Tom Curran against Rajasthan Royals, he has not batted upto his calibre. He has an average 35.67 Dream 11 points. He seems to be quite unreliable.

Wriddhiman Saha disappointed the SRH management with his slow knock against KKR and was subsequently dropped from the side. 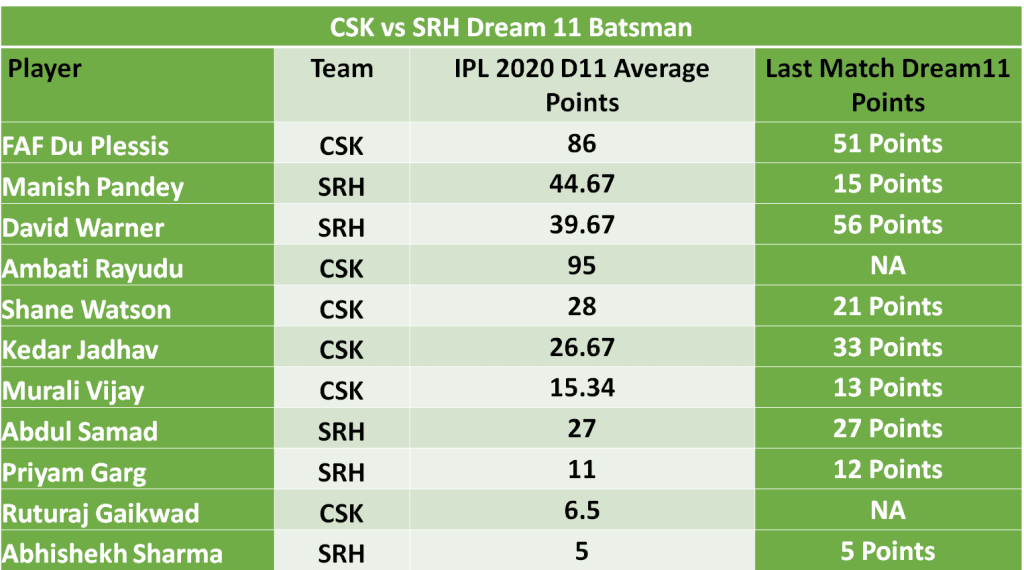 Next to Faf will surely be Manish Pandey who is also in terrific form. He averages around 45 Dream11 points in IPL 2020 season.

David Warner too his having a good IPL season however he is pretty unreliable as a Dream11 batsman.

It will be very tough decision to decide the 3rd, 4th and 5th Dream11 batsman for this match. However, Warner can be considered as 3rd batsman followed by Ambati Rayudu .

Murali Vijay and Shane Watson haven't got it right, this IPL season. They will surely try to makeup for it against SRH. Therefore both is still an unreliable option as Dream11 batsman. 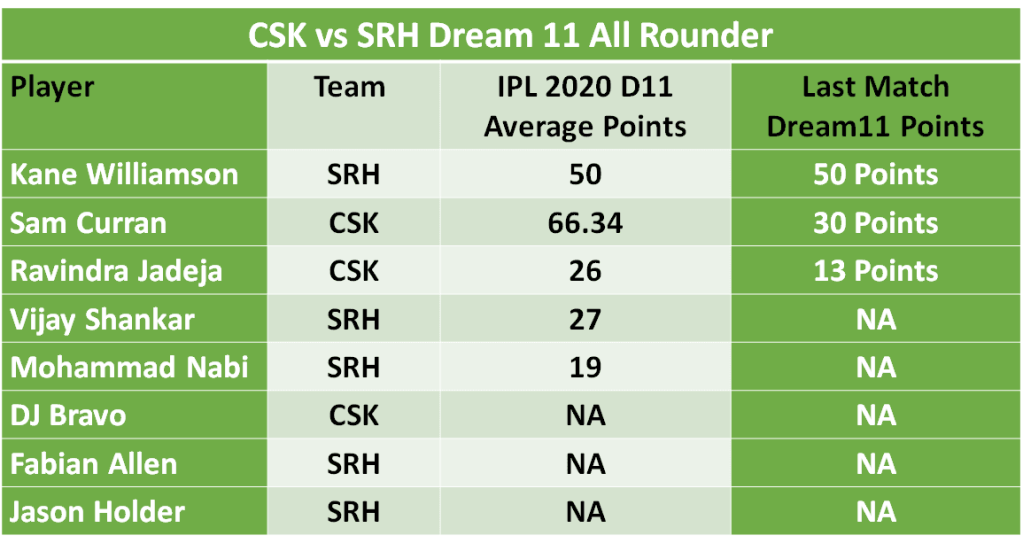 Apart from Sam Curran, no other all-rounder has performed consistently in both the teams. Ravindra Jadeja hasn't bowled upto the expectations.

Mohammed Nabi did bowl well but failed with the bat and was subsequently dropped for maintaining team balance.

Therefore for this match, as an all-rounder only Sam Curran is a reliable option. However, if two all-rounders are preferred than Ravindra Jadeja can be the 2nd option. 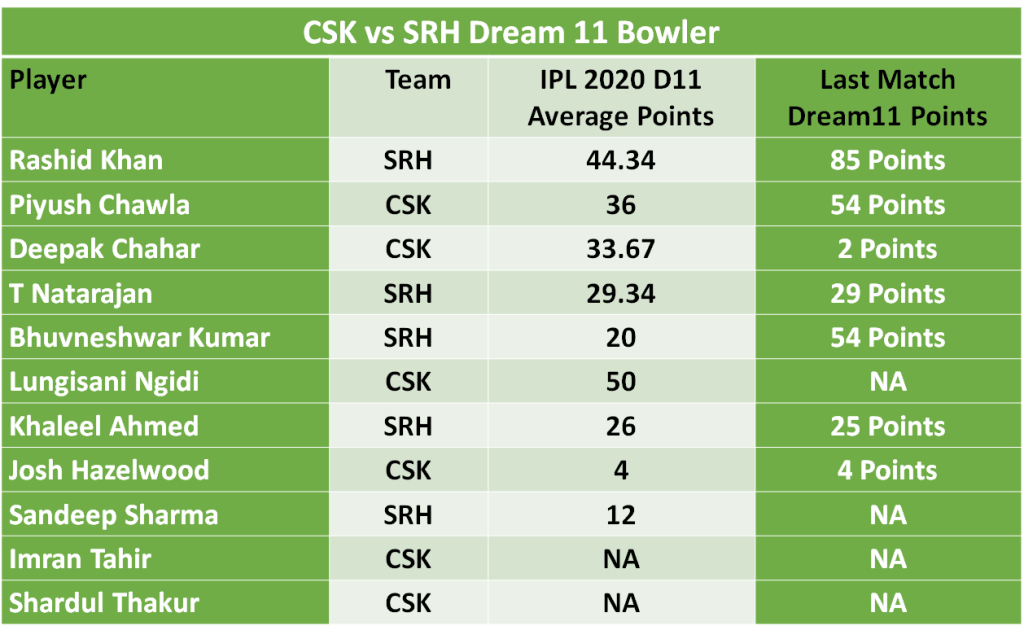 The Afghan cricketing hero, Rashid Khan can be the first option as a Dream11 bowler. He can even deliver with his bat. Rashid can be followed by Indian pacer Bhuvneshwar Kumar. Bhuvi is gradually getting back in his form.

Next to Rashid and Kumar, the two Chennai bowlers, Deepak Chahar and Piyush Chawla have bowled quite well. They can be made part Dream11 bowlers.

Lungisani Ngidi was good with the ball until Archer smashed 27 runs of 2 balls against him. Hazelwood too hasn't impressed with ball. Both are not very reliable as as Dream11 bowlers.

Natrajan has bowled consistently well while Khaleel has to up the ante. SRH lacks a quality fifth and sixth bowler.