Chennai have already played 5 IPL matches this season and have lost 3 and won 2 matches. They are currently placed at No.5 position out of 8 teams in the IPL 2020 standings. Kolkata on other hand have played 4 matches with 2 wins and 2 losses and they are at No. 4 position in IPL standings.

KKR lost their last match against Delhi Capitals while CSK after 3 consecutive defeats won their last IPL match against Kings XI Punjab. Both the teams will be looking forward to register a win in order to improve their table standings

If you want to look at latest betting and predictions about who will win this match, click here

Of the two matches, KKR have lost both the matches against Mumbai Indians and Delhi Capitals.

For the match between between KKR and CSK the ideal combination of Dream11 team would be 1 WK, 5 Batsmen, 1All-rounder and 4 Bowlers.

KKR vs CSK Dream11 Team Predictions : Players who have performed Poorly in IPL 2020

Both MS Dhoni and Dinesh Karthik haven't had a good IPL season as of now. However, having MS Dhoni as a first choice of wicket keeper will be preferable.

Dinesh Karthik have failed in almost all the matches that he played in IPL 2020. 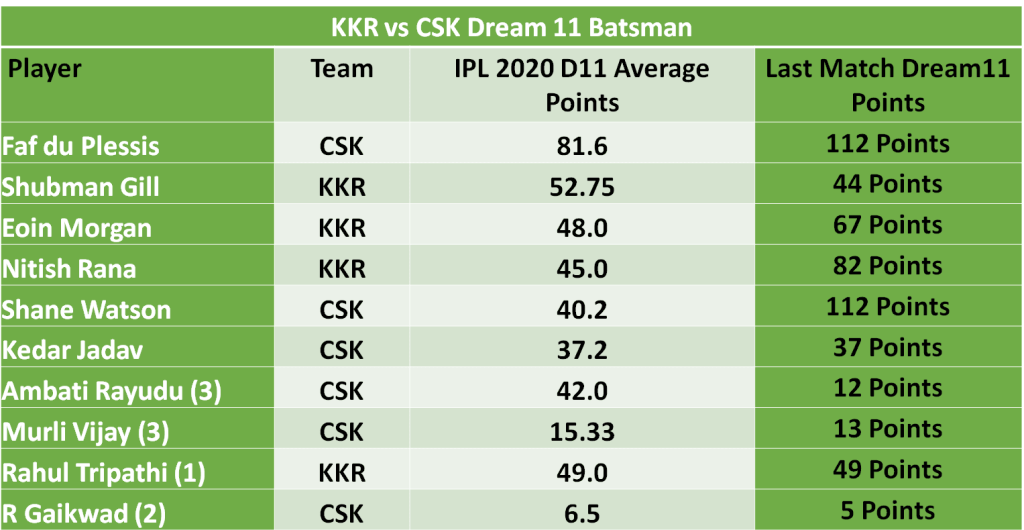 Chennai's Faf du Plessis have been in great form in this IPL season. He averages over 81 Dream11 points this season. He will be the 1st choice as Dream11 batsman.

Faf will be followed by young Shubman Gill from Kolkata and English skipper Eoin Morgan. Both have been very much consistent and will be the better choice as 2nd and 3rd Dream11 batsman.

For match between CSK and KKR, going with 4 batsman will be a good option. Nitish Rane or Shane Watson will be able to fill up the shoes of 4th Dream11 batsman.

Andre Russell and Ravindra Jadeja have been consistent in this season's IPL. They will be the first two choices as Dream11 all-rounders. Together they have delivered an average of almost 83 Dream11 points per match.

Sam Curran too have had a good IPL 2020 season. He will also make a good option as a Dream11 all-rounder. Sunil Narine has disappointed as an all-rounder this season. 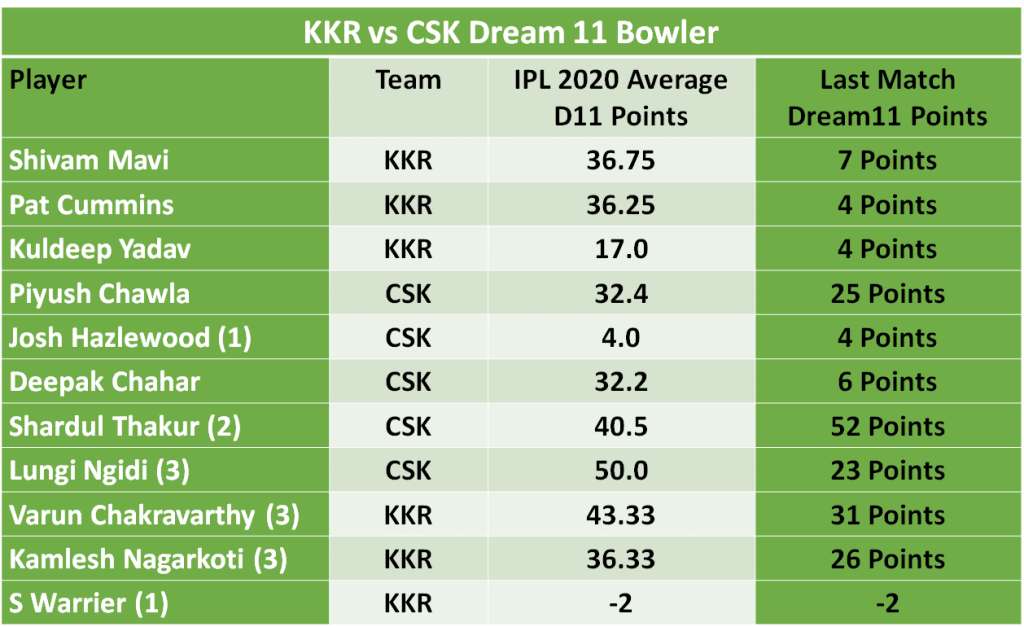 Bowlers from both teams have struggled to some extent in IPL 2020. However, Varun Chakravarthy who has been included in Playing XI of KKR for last 3 matches have been impressive. He will be the first choice as Dream11 bowler.

Next to Varun, will be KKR's Shivam Mavi. Though he failed in last match, he has been quite consistent in IPL 2020 season. He averages over 37 Dream11 points this season.

Piyush Chawla is also having a good IPL 2020 season. Though bit expensive he is able to pick wickets at regular intervals. He too is good choice as a Dream11 bowler.

Imran Tahir may be included in CSK's Playing XI.