SRH vs KXIP Dream11 Team Predictions : Sunrisers Hyderabad takes on Kings XI Punjab in 22nd match of IPL 2020 at Dubai International Cricket Stadium. Both teams have played 5 matches each in this IPL season. SRH have won 2 matches while KXIP have won only 1 match.

If you are only interested in knowing who will win this game, click here for betting and prediction update

Currently Kings XI Punjab are placed at 8th in IPL standings and Sunrisers Hyderabad are placed at No. 6. Both teams desperately needs a win to boost the morale of their teammates. Punjab have lost last 3 matches that they played in IPL 2020 while SRH won the two matches before losing the last match to Mumbai Indians.

Looking after the performance of every player in IPL 2020 from both the teams, the best Dream11 team combination would be 3 WKs, 3 Batsmen, 1 All rounder and 4 Bowlers.

Captain KL Rahul from KXIP and Jonny Bairstow are having an outstanding IPL 2020 series. Having both in Dream11 team as wicket keepers will be advantageous.

Nicolás Pooran is gradually gaining his mojo back but it will be quite risky to have him as Dream11 wicket keeper.

Mayank Agarwal will be the very first choice as Dream11 batsman. He has been the star batsman for KXIP and has delivered almost 78 Dream11 points per match in IPL 2020.

He will be followed by David Warner who too is having a good IPL season. Even in last match he delivered 81 Dream11 points.

Manish Pandey can be made part of the Dream11 team as a third batsman. Though he hasn't been consistent but he can be relied upon to perform in the match.

Priyam Garg and Sarfaraz Khan have completely failed in IPL 2020. They are very much inconsistent not reliable as Dream11 batsman.

Kane Williamson was part of Playing XI for 3 matches but failed to perform. He was dropped in last match of SRH.

Chris Gayle is yet to play in this season's IPL. 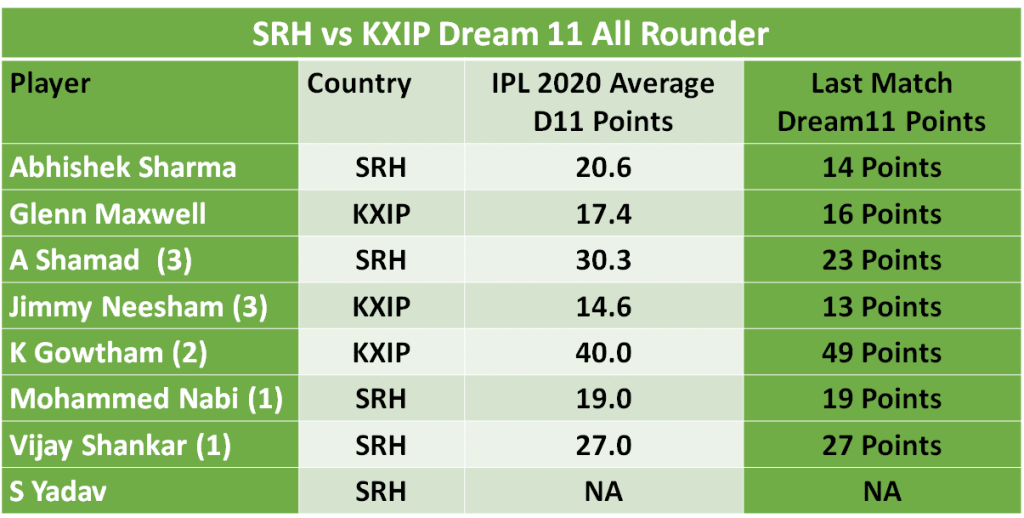 None of the allrounders have been able to deliver in this IPL season from both the teams.

Abhishek Sharma (SRH) and Glenn Maxwell (KXIP) are the two all-rounders who have been part Playing XI of respective teams in all 5 matches that they played. However, they are yet to give their best.

Abhishek Sharma can be the 1st choice as Dream11 allrounder. However, having Maxwell in team will be quite risky.

Abdul Samad who played the last three matches for Sunrisers Hyderabad can be considered as 2nd all-rounder for Dream11 team.

Mohammad Nabi, Vijay Shankar have been dropped after 1 match. 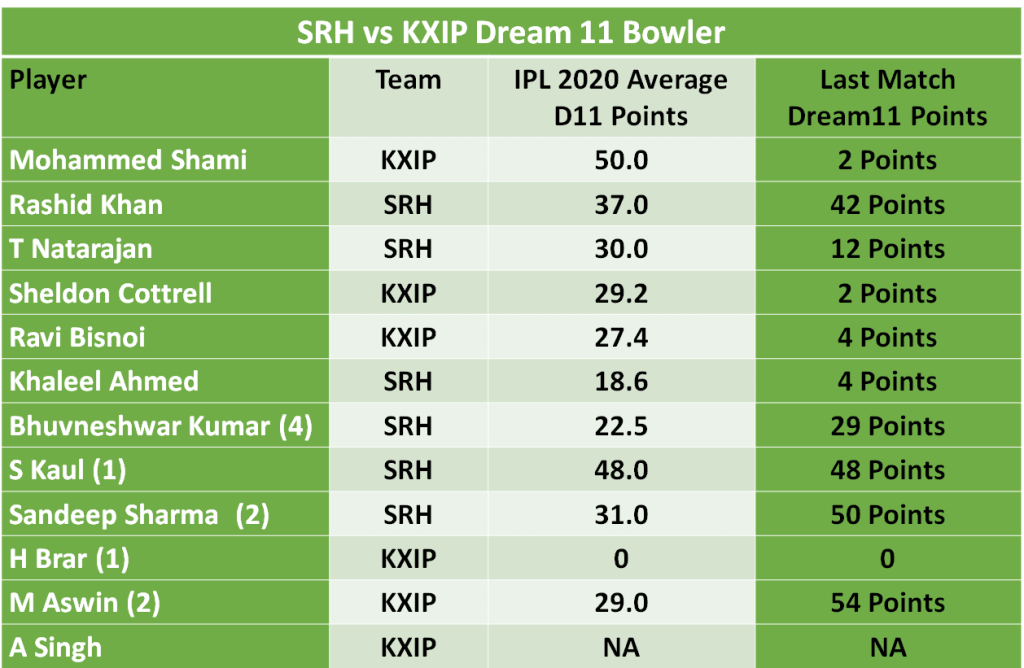 Mohammed Shami has been exceptional in IPL 2020. However, he failed in last match. But he is pretty reliable to be the first choice as Dream11 bowler.

T Natarajan and Sheldon Cottrell will be the perfect choice as 3rd and 4th Dream11 bowlers. Both though failed in last match, but have been very much consistent in this season. Together they average around 60 Dream11 points per match in this IPL season.

Ravi Bisnoi hasn't been a consistent bowler and he will be a risky choice as Dream11 bowler. Khaleel Ahmed too is yet to deliver in this season's IPL.

Sandeep Sharma who played in last 2 matches for SRH can also be ideal choice as Dream11 bowler. Young Siddarth Kaul too can be part of team but he played only one match and is surely unreliable.