DC vs RR Dream11 Team Predictions :Today on 14th October, Delhi Capitals takes on Rajasthan Royals in 30th match of IPL 2020. More than 50% of matches of IPL 2020 have already been concluded and almost all the teams have already played one match against each team.

On Wednesday when DC clashes with RR at Dubai International Stadium, it will be the 2nd time when these two teams will be meeting in this IPL season. First time when DC met RR, Delhi registered a handsome win against Rajasthan. Chasing a target of 185 runs, Rajasthan Royals were bundled up for 138 runs in 20th over.

Delhi Capitals with 5 win and 2 losses in 7 matches in this season are at No. 2 in IPL table standings while Rajasthan Royals with 3 wins and 4 losses are at No. 6 in table standings. Win for DC will push them to No. 1 in the standings and win for Rajasthan will keep their hopes alive for making into qualifiers.

Rajasthan Royals have played two matches at Dubai International Stadium in IPL 2020. The first match that they played was against Kolkata Knight Riders which they lost by 37 runs. In second match they defeated Sunrisers Hyderabad by 5 wickets.

Dehli Capitals have 100% win record at Dubai Stadium. They played 3 matches in Dubai in this season and won all the three matches. 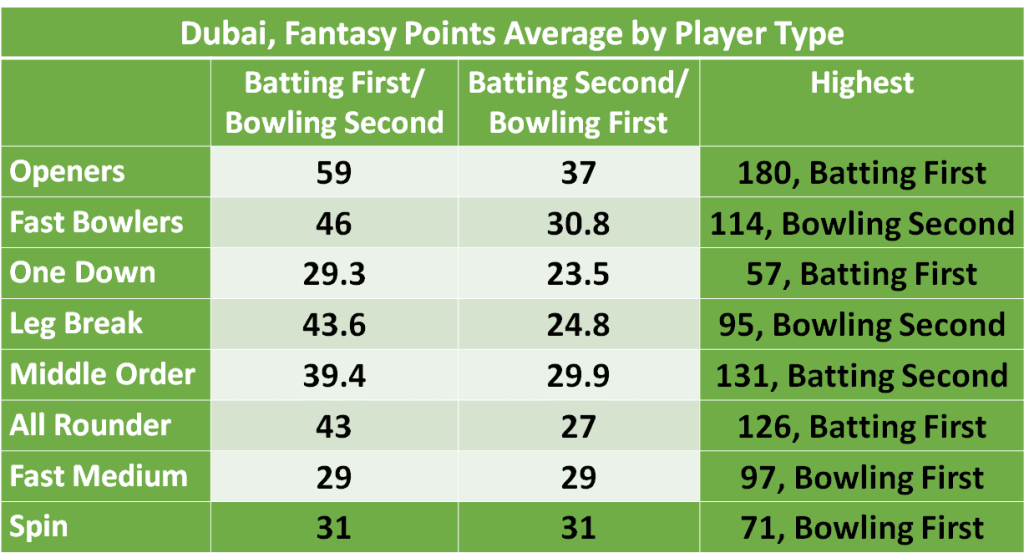 Looking at the performance of each players from both the teams, the ideal Dream11 combination if Rishabh Pant is part of Playing XI of DC, would be 2WKs, 4 Batsman, 2 All rounders and 3 Bowlers.

If Rishabh Pant is not part of Playing XI then ideal Dream11 team combination would be 1WK, 4 Batsman, 3 All rounders and 3 Bowlers.

Read our DC vs RR Predictions and Betting Analysis

Rajasthan Royals' Sanju Samson have been outstanding in this IPL season. He averages over 51 Dream11 points per match and has been very much consistent with his performance. He will be the first choice as Dream11 wicket keeper.

Jos Buttler is struggling and will be risky choice as Dream11 wicket keeper. 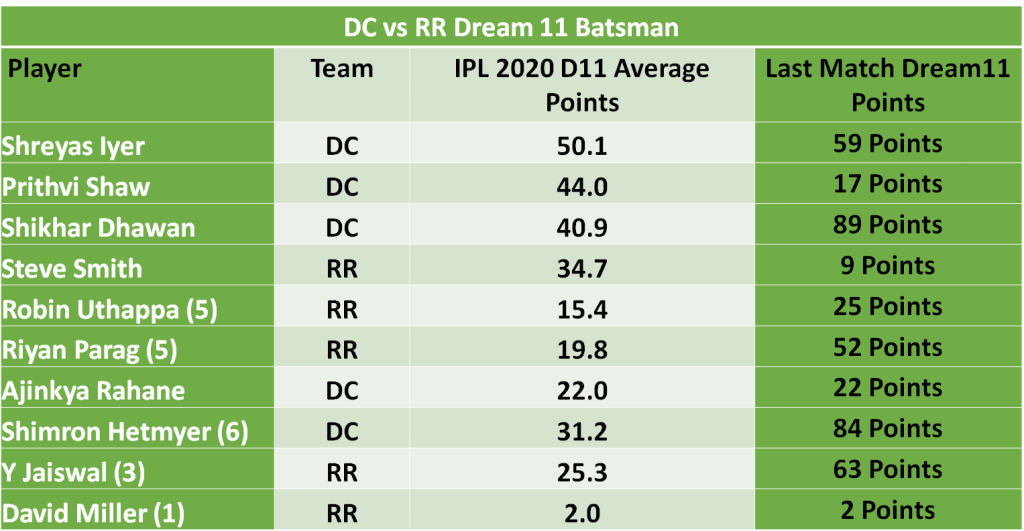 Both Delhi Capitals and Rajasthan Royals have plenty of talents as batsman. However, most of them have failed to deliver in IPL 2020.

As a first choice of Dream11 batsman, Delhi Capitals Captain, Shreyas Iyer will be an ideal choice. He is having an impressive season and has been leading his team from front.

Following Iyer would be Rajasthan's captain Steve Smith. Smith is yet to play big innings but he has been consistent with his performance and will be a good choice as Dream11 batsman.

Barring last match against Mumbai Indians, Prithvi Shaw has been outstanding in IPL 2020 season. He is one of the best suited option as Dream11 batsman.

Though Shikhar Dhawan hasn't had the best IPL season, he will still be one of the favorites for Dream11 team. He averages close to 41 Dream11 points this season and in last match he delivered 89 Dream11 points which makes his an ideal option as 4th Dream11 batsman.

Both Robin Uthappa and Riyan Parag are struggling in IPL 2020. Ajinkya Rahane was back in Playing XI of DC against Mumbai. However, he could not contribute much for his team.

All rounders from both Rajasthan and Delhi have been impressive this season. Young Rahul Tewatia will be the first choice as Dream11 all-rounder for this match. He averages massive 61 points per match in IPL 2020 seasons.

Tewatia will be followed by Marcus Stoinis who is having an outstanding season. He has been impressive with bat as well as ball. He will be an asset as a Dream11 all-rounder.

Axar Patel too has been consistent however, if a 3rd all-rounder is to be picked then Ben Stokes who just returned to Rajasthan Royals side will be the best choice. He is one man who holds the record of being the best as batsman and as a bowler too.

Kagiso Rabada from Delhi Capital and Jofra Archer from Rajasthan Royals have been the two best bowlers in IPL 2020 season. Having them in Dream11 team will always beneficial. Together they average close to 130 Dream11 points per match.

Ravichandran Ashwin who is gradually regaining his form will be the best suited as a third Dream11 bowler for this match.

Shreyas Gopal has disappointed in almost all the matches that he played in IPL 2020 and so has Harshal Patel. Both will be a risky choice as Dream11 bowlers.