At present, Kolkata is placed at No 4 in team standings and Punjab are at the bottom of the table.

At Abu Dhabi Stadium, Kings XI Punjab played only one match in this IPL season. They lost their only match at Abu Dhabi against Mumbai Indians.

Kolkata on other hands have played 4 of their 5 matches at Abu Dhabi and have had 50% success rate. They beat Chennai Super Kings and Sunrisers Hyderabad while lost to Mumbai Indians and Delhi Capitals.

After analyzing the performance of ever players in IPL 2020 from both the teams the ideal Dream11 team for the match between KXIP and KKR should include 2 WKs, 4 Batsmen, 1 All-rounder and 4 Bowlers.

KXIP's captain KL Rahul will be the first choice as Dream11 wicket keeper. He is having an outstanding series though he failed in last match against Hyderabad. In last 6 matches he delivered 81 Dream11 points per match.

Nicolas Pooran too has been consistent in IPL 2020. Having him in Dream11 team will be advantageous. In last match he gave a whopping 116 Dream11 points.

Dinesh Karthik has failed to perform therefore he will be a risky choice as Dream11 wicket-keeper. Karthik captain of Kolkata averages just over 24 Dream11 points in this season.

Mayank Agarwal, though he struggled in last match, will be the first choice as Dream11 batsman. He will be better accompanied by the KKR's young prodigy Shubhnam Gill. Gill averages around 47.0 Dream11 points per match in this IPL season.

Rahul Tripathi has been part of Punjab's Playing XI for last two matches and he proved his worth in both the matches. He will be the best suited as 3rd Dream11 batsman.

For 4th Dream11 batsman, there is a competition between Eoin Morgan and Nitish Rana. Both have been consistent in IPL 2020 but both failed in their last IPL match of this season. Having anyone of the two will be a good choice.

Mandeep Singh was part of Playing XI of KXIP for last two matches but he failed in both the matches.

Karun Nair was part of KXIP's Playing XI for 4 matches but he could not deliver a good result in any of the matches. Therefore, he was excluded from Playing XI in last two matches. Chris Gayle is yet to play for Punjab in IPL 2020.

The choice of Dream11 all-rounder will be a difficult task. Most of the all-rounders have completely failed while others are yet to play a big innings.

Andre Russell can be taken as an all-rounder for Dream11 team. Sunil Narine and Glenn Maxwell have failed in this season's IPL therefore, it is advisable to have just one Dream11 all-rounder. 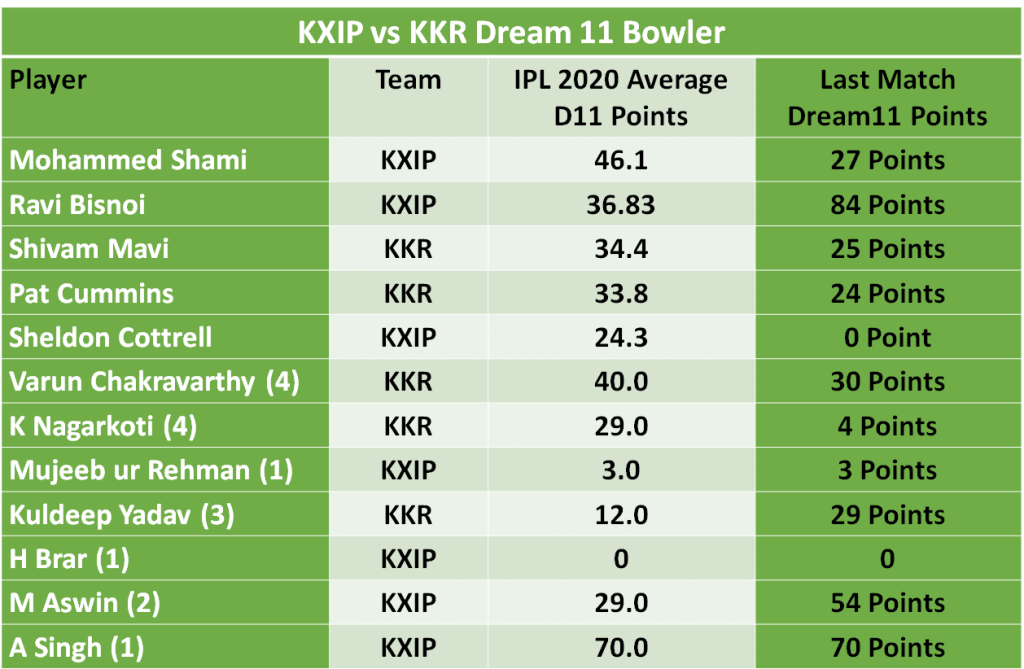 Both KKR and KXIP have had some excellent bowlers, therefore, the selection of Dream11 bowlers will not be a difficult choice.

As a Dream11 bowler, the very first choice will be Punjab's Mohammed Shami and he will be followed by his teammate Ravi Bishnoi who was outstanding against Hyderabad in last match.

Young Shivam Mavi can be taken as 3rd Dream11 bowler and as 4th bowler, Kolkata's Varun Chakravarthy has been very much consistent. He will be an asset for any Dream11 team.

Pat Cummins though consistent haven't delivered big for Kolkata while Sheldon Cottrell have been failing in last few matches.