CSK vs RCB Dream11 Team Predictions : Chennai Super Kings, the most consistent team in IPL history is struggling. They have played 6 matches in IPL 2020 and have lost 4 and won 2 matches. Tonight they will face Virat Kohli's Royal Challengers Bangalore who in 5 match have won 3 and lost 2.

Chennai is currently placed at No. 6 in IPL 2020 and Bangalore is placed at No. 5. The clash between the two teams will take place at Dubai International Stadium and it will be 25th match of IPL 2020. For Chennai it will be 7th IPL match while for Bangalore it will be 6th Indian Premier League 2020 match.

Chennai have played 3 matches at Dubai International Stadium in IPL 2020 season. First match they lost against Delhi Capitals which was followed by loss against Sunrisers Hyderabad. In the last match that they played at Dubai, they beat Kings XI Punjab by 10 wickets.

RCB played 4 of their five IPL 2020 matches at Dubai Stadium. They won two and lost two.

They started well against SRH and beat them by 10 runs. In 2nd match at Dubai, they lost by 97 runs to KXIP. In their 3rd match they beat Mumbai Indians in Super Over but lost to Delhi Capitals in the last match that they played at Dubai.

After analyzing the performance of all the players from both teams in IPL 2020, the ideal Dream11 team prediction would be 2 WKs, 4 Batsmen, 2 Allrounders and 3 Bowlers.

MS Dhoni has been facing lots of criticism from his fans but he has been consistent with his performance. In last 6 matches, he averages over 40 Dream11 points per match thereby making his 2nd ideal choice as Dream11 wicket keeper.

Josh Philippe played first two matches and has been dropped while Parthiv Patel and N Jagadeeshan are yet to play in IPL 2020. 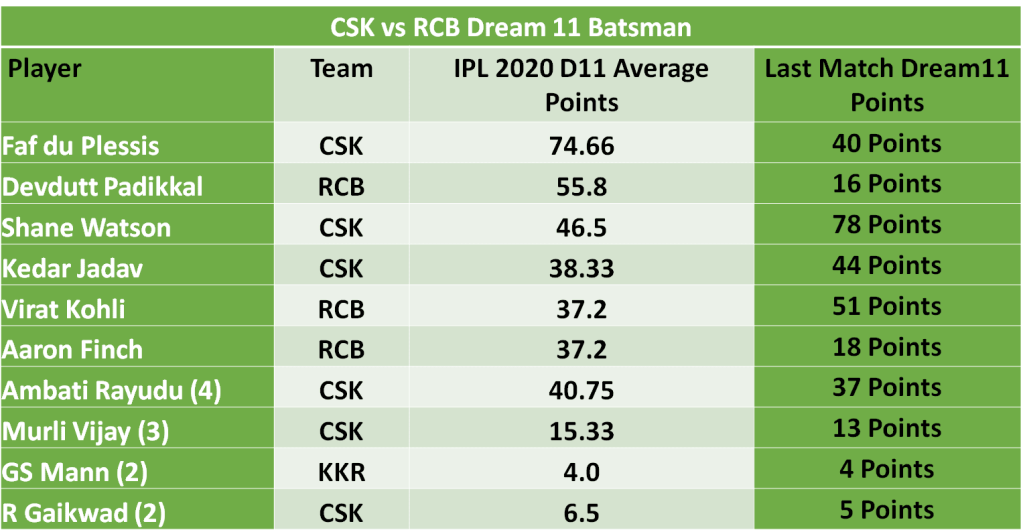 Batsmen from both the teams have been performing well in IPL 2020. As a Dream11 batsman, the very first choice will be Faf du Plessis who averages massive 74.66 Dream11 points per match. Though his team has not been performing well, he has been excellent with his bat.

Next to Faf will be none other than young gun Devdutt Padikkal. Padikkal failed in last match against DC but he has been consistent in this season's IPL and is an ideal Dream11 batsman.

Shane Watson is back in his form and has been impressive in last three matches. For Dream11 batsman he has all the qualities and having him in team will always be advantageous.

Aaron Finch and Virat Kohli will be the ideal 4th and 5th Dream11 batsman. Together they average around 75 Dream11 points per match.

Kedar Jadhav has been in line of fire after his performance against KKR. He is a very risky choice as Dream11 batsman.

Ambati Rayudu is back after he got injured in very first match of CSK in IPL 2020. He played 3 matches after his return and is yet to deliver from his bat.

CSK vs RCB Dream11 Team Predictions : All- rounders for IPL2020

Sam Curran will be followed by his teammate Ravindra Jadeja who is consistent enough to be part of Dream11 team as all-rounder. 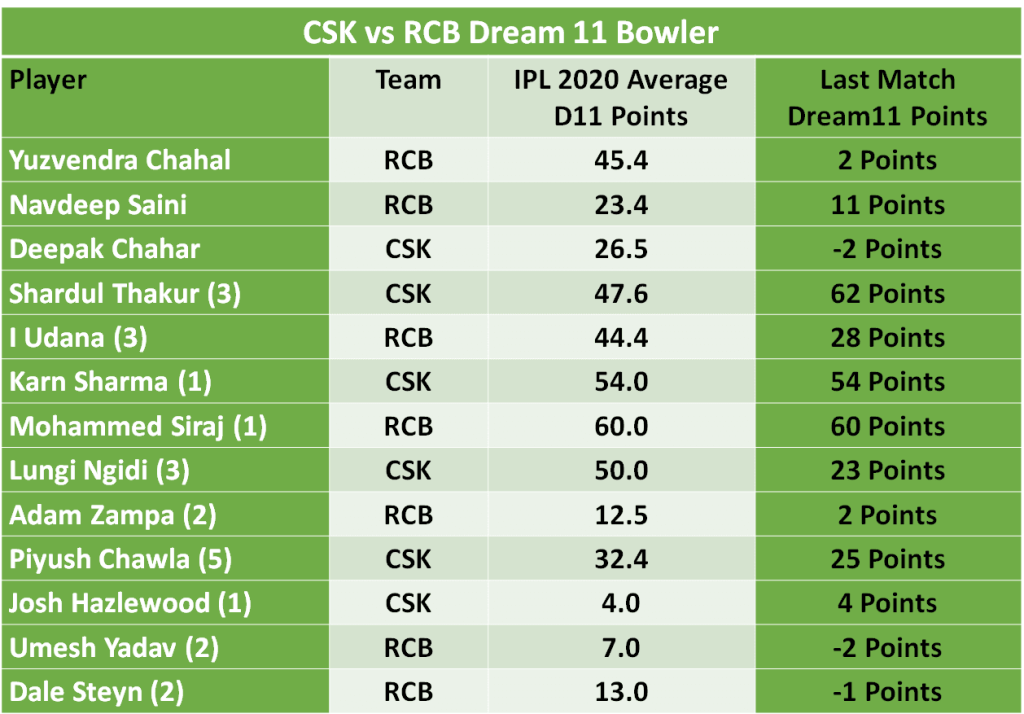 The star bowlers from both the teams have disappointed in last few matches. But the young guns like Shardul Thakur from Chennai and I Udana from Bangalore have been impressive.

Both Thakur and Udana have been part of Playing XI of their respective teams for last 3 matches and have performed in all the matches. They will be an ideal choice as 1st and 2nd Dream11 bowlers.

As a 3rd bowler, Yuzvendra Chahal can be good option. Though he is not very consistent but has the capability to change the course of any match single handedly.

Karn Sharma and Mohammed Siraj were part of Playing XI of their respective teams in last match. Both performed well but lack of experience in IPL 2020 makes them a risky choice as Dream11 bowlers.

Deepak Chahar is having some bad days while Piyush Chawla was dropped in last match after being part of CSK's Playing XI for last first 5 matches.

Lungi Ngidi was dropped from CSK's Playing XI after first 2 matches and Imran Tahir is yet to make his debut in IPL 2020.