RCB vs KKR Dream11 Team Predictions : Royal Challengers Bangalore and Kolkata Knight Riders will play their 7th match of IPL 2020 when they meet each other at Sharjah Cricket Stadium.

Win for any of the two teams in this match will strengthen their position in IPL 2020 standings.

Royal Challengers Bangalore haven't played any match at Sharjah in this season's IPL. This will be their first match of IPL 2020 at this stadium.

Analyzing the performance of each player from both the teams and comparing it with the Dream11 points that they delivered in every match, the ideal Dream11 team combination would be 2 WKs, 4 Batsmen, 2 All-rounders and 3 Bowlers.

Here we share the stats of each players from both the teams with respect to their performance as Dream11 player.

AB de Villiers had an excellent first 3 matches in IPL 2020 however, in last three matches he has struggled with his performance. In last match against Chennai he delivered only 10 points and has delivered at at average of 42 Dream11 points in IPL 2020 season. He is quite risky but can change the course of any match single handedly.

Dinesh Karthik led from front on Saturday in match against Kings XI Punjab by delivering 82 Dream11 points. His performance in IPL 2020 has been average.

As a Dream11 wicket keeper, Ab de Villiers can be preferred as a first choice.

In IPL 2020, young players have performed better than most of the experienced ones. One such player in RCB's Devdutt Padikkal. Padikkal is having an outstanding IPL season and has been able to perform in almost every IPL match that he played in IPL 2020.

Next to Padikkal is Shubhman Gill from KKR. Gill has been very much consistent and averages close to 53 Dream11 points per match in IPL 2020 season. He along with Padikkal will be the first and 2nd choice as Dream11 batsman.

Virat Kohli was outstanding against Chennai on Saturday. He gave whopping 114 points in last match. However, he hasn't been consistent in IPL 2020 but as a Dream11 batsman he cannot be ignored. He will definitely be the third choice as Dream11 batsman.

As 4th batsman, the fight may be between Eoin Morgan, Aaron Finch and Nitish Rana. Morgan has been somewhat consistent in this season while Finch and Rana have struggled in last three of their matches. Therefore, if consistency is the criteria then going with Eoin Morgan as 4th Dream11 batsman will be a better option.

All rounder selection might have been a tough choice for this match but return of Chris Morris in RCB's Plying XI made the task easier. He was included in Playing XI in last match of RCB against CSK and he did not disappoint both his team and Dream11 players. He delivered 103 Dream11 points and he is definitely the first choice as Dream11 allrounder for this match.

Sunil Narine is having an average IPL 2020 season while Andre Russell had bad last two matches. However, having Russell as 2nd Dream11 all-rounder may prove to be a good choice.

Washington Sundar and Shivam Dube has been inconsistent and both are very risky choice as Dream11 all-rounders. 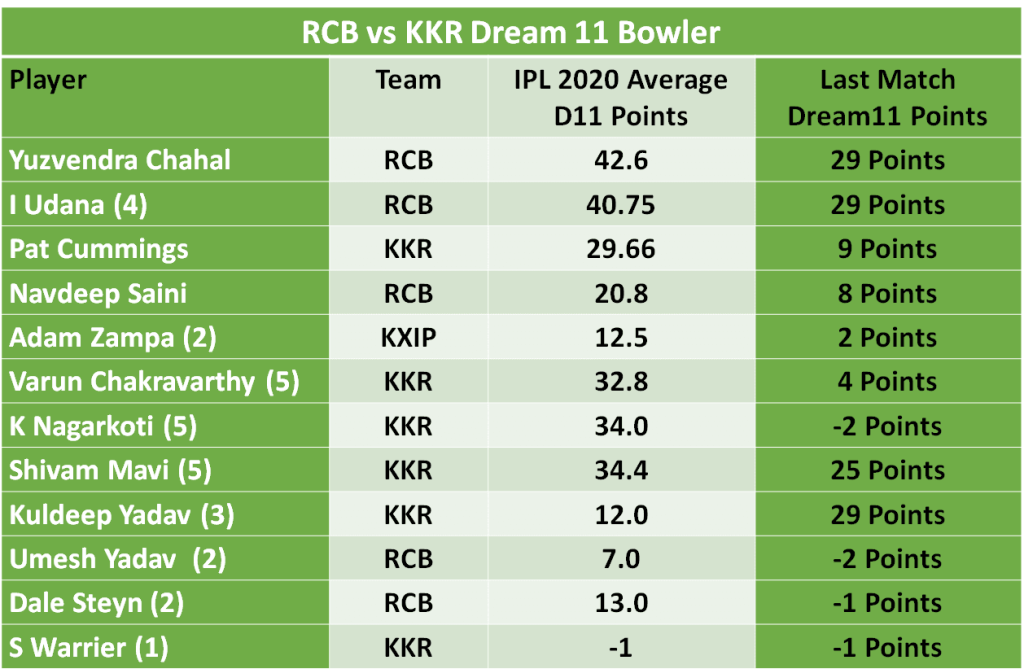 Selection of Dream11 bowler for this match could be a real tough task. Yuzvendra Chahal barring two matches haven't been impressive in rest of the 4 matches.

Shivam Mavi was dropped from Playing XI in last match against KXIP and is doubtful to be back in KKR's Playing XI for this match.

Pat Cummins has disappointed in all the matches that he played in IPL 2020. Navdeep Saini from RCB is yet to find a good day to perform and both Varun Chakravarthy and K Nagarkoti after having a one good match haven't been able to perform well.

Kuldeep Yadav and Umesh Yadav are unlikely to be part of Playing XI of their respective teams.

Therefore as a Dream11 bowler, having just 3 in a team will be an ideal option. Young I Udana, experienced Yuzvendra Chahal and having anyone from Varun and Nagarkoti will be an ideal choice.