SRH vs CSK Dream11 Team Predictions : Sunrisers Hyderabad will take on Chennai Super Kings on 13th of October in 29th match of IPL 2020. The match will take place at Dubai International Cricket Stadium.

Chennai Super Kings are having a hard time in this IPL and after 7 matches they stand at No. 7 position in IPL 2020 table. They have won two matches while lost 5 matches. Hyderabad on the other hand are at 5th position with 3 wins and 4 losses.

The last match between them was 14th match of IPL 2020 season. Chennai beat Hyderabad by 7 runs.

For Chennai to enter the qualifiers, they will have to win all the matches from now on. Therefore, this match will be very crucial for MS Dhoni led Chennai. Hyderabad on the other hand will be looking forward to settle the score of last defeat against CSK.

Chennai Super Kings have already played 4 matches at Dubai Stadium in this season's IPL. They won two matches here, one against Sunrisers Hyderabad and the 2nd one against Kings XI Punjab respectively while lost other two matches against Delhi Capitals and Royal Challengers Bangalore.

Sunrisers Hyderabad too played 4 of their 7 matches at Dubai. Out of 4 matches they won one against KXIP while lost the rest against RCB, CSK and Rajasthan Royals. 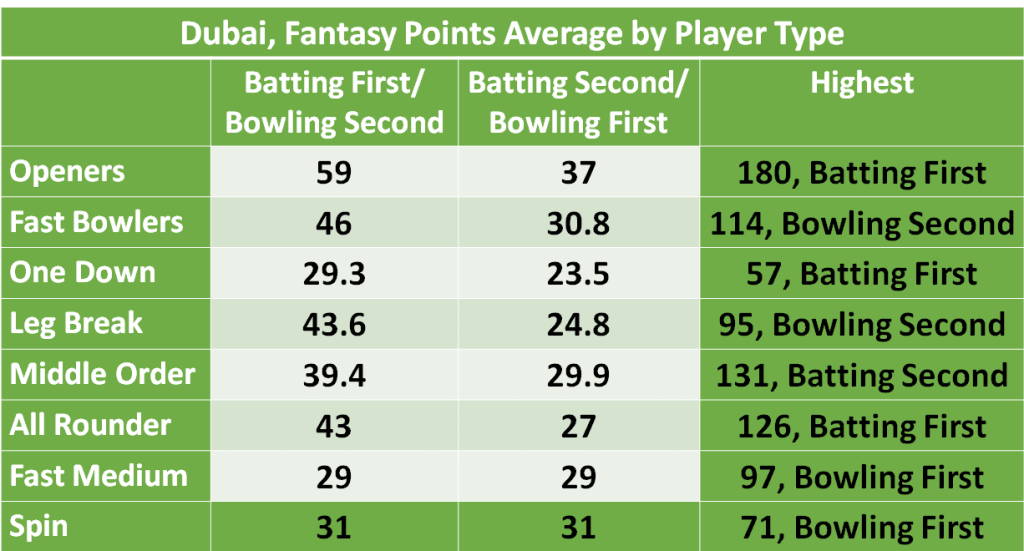 After analyzing the performance of players from both the team, the ideal Dream11 team combination would be 2 WKs, 4 Batsmen, 2 All-rounders and 3 Bowlers.

Jonny Bairstow will be the first choice as Dream11 wicket keeper. He has been consistent with his performance in IPL 2020 season.

Mahendra Singh Dhoni is struggling in this season. Though he averages just close to 40 Dream11 points, it will be risky to have him as a Dream11 wicket keeper.

N Jagadeeshan who included in Playing XI of CSK for last match against RCB. He did show his potential as a wicket keeper batsman. He may however be a risky option due to the lack of experience. 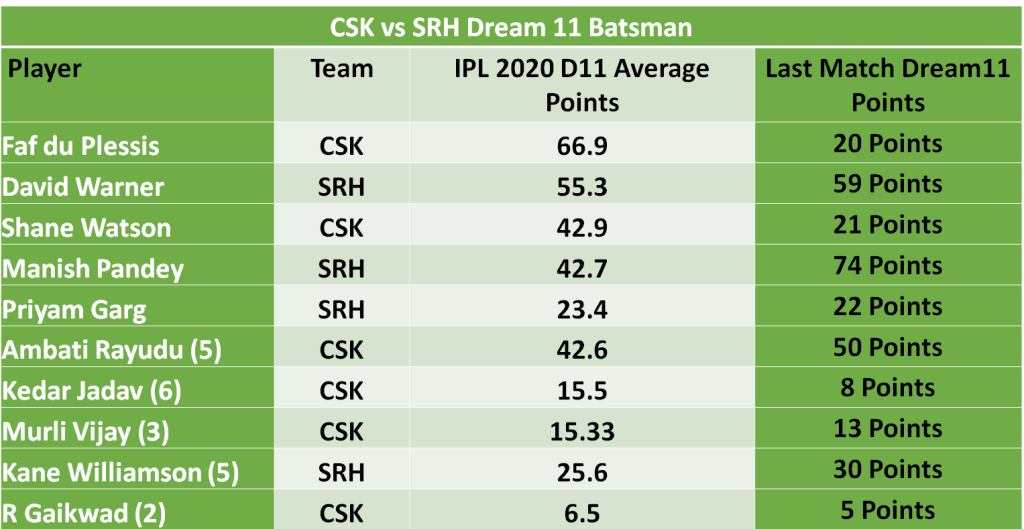 Manish Pandey is other batsman from SRH who has been consistent with his performance. Having him in team as a Dream11 batsman will be an ideal option. In last match he delivered 74 Dream11 points.

Shane Watson has been quite consistent but he failed to perform in last match against RCB. He is a good option as a Dream11 batsman. He averages close to 43 Dream11 points in IPL 2020.

Ambati Rayadu is yet to perform after his return from injury. Priyam Garg has disappointed in almost all the matches that he played in IPL 2020. 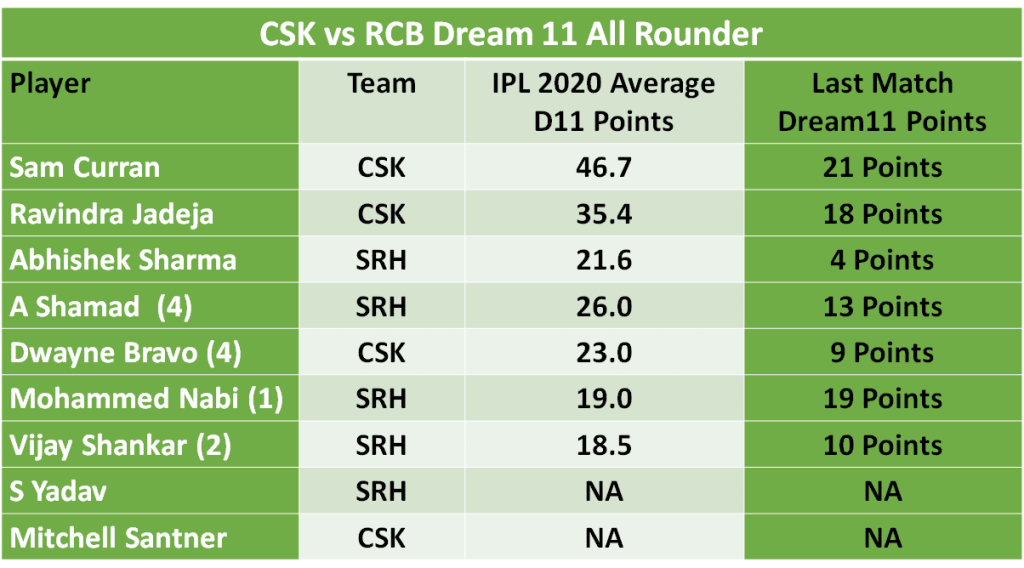 Sam Curran is one player who has been in great form in IPL 2020. Though he could not deliver in last match but he has been consistent with his good performance in rest of the matches that he played in IPL 2020. He averages close to 47 Dream11 points and having him as a Dream11 all-rounder will be great option.

Ravindra Jadeja can be considered after Sam Curran. Though he hasn't been in his best but he has a potential to change the course of any match single handedly.

Abhishek Sharma has failed to perform in almost all the matches that he played in IPL 2020. Though he has been part of SRH's Playing XI in all the 7 matches, he as a Dream11 all-rounder will be a difficult choice.

Dwayne Bravo was excellent in match against Kolkata Knight Riders but he failed in the next match against RCB. In 4 matches that he played in IPL 2020, he could show his good performance only against KKR and in rest he failed completely. He is a risky choice as Dream11 all-rounder.

Mitchell Santner and Sanjay Yadav are yet to be part play in this season's IPL. The Carribean Fabian Allen may be considered for CSK vs SRH match. 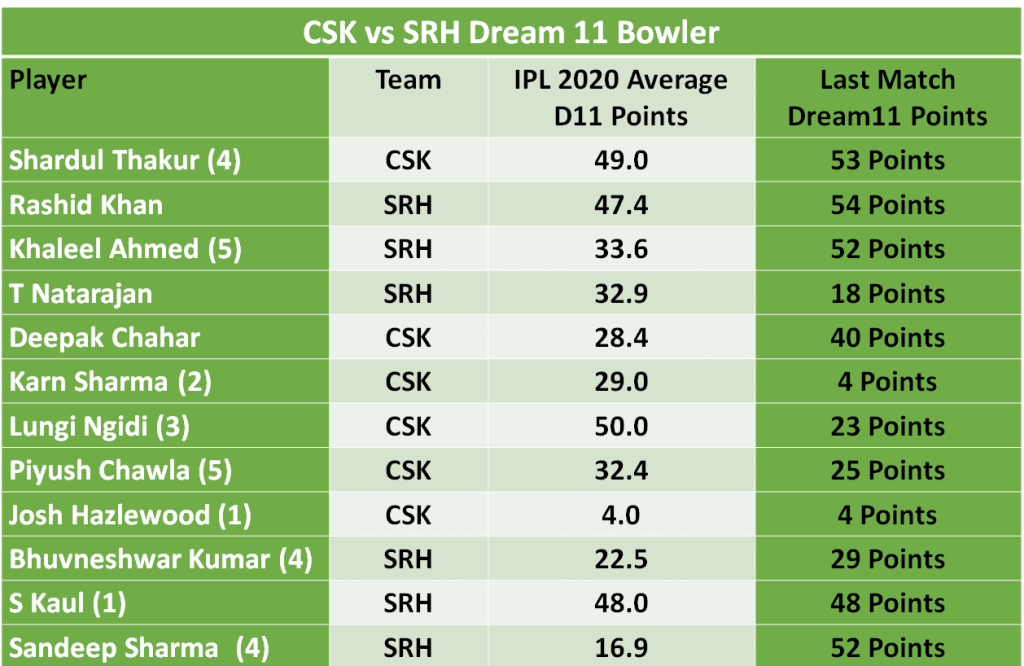 Rashid Khan and Shardul Thakur has been in good form in IPL 2020. Both have been consistent with their performance in IPL 2020. Together they average around 97 Dream11 points and as a Dream11 bowlers they will be a good option.

Khaleel Ahmed is gradually turning out to be a good bowler. He has been part of SRH's Playing XI in last 5 matches and have been quite consistent with ball. He can be the part of Dream11 team as a 3rd bowler.

Karn Sharma has been part of Chennai's Playing XI for last two matches but haven't been much effective as a bowler.

Josh Hazlewood played one match and haven't been able to make his way in Playing XI of CSK.