Chennai Super Kings are having worst IPL season ever. In last 8 matches that they played they won 3 and lost 5 matches. Going forward they will have to win all the matches in order to keep their hopes alive to qualify for the qualifiers.

Delhi Capitals on the other hand are the leaders in IPL 2020 points table. Of 8 matches that they played this season, they won 6 matches and lost only 2. On Saturday, they will be looking forward to carry on their excellent performance against Chennai and consolidate their chances of qualifying for final four.

The two teams will meet each other at Sharjah Cricket Stadium.

At Sharjah, Chennai Super Kings have played only one match in this season. They lost the only match that they played at Sharjah against Rajasthan Royals.

For Delhi Capitals, it will be their first match at Sharjah Cricket Stadium.

NOTE : The below table includes Dream11 points of all the matches played as Sharjah in IPL 2020.

After analyzing the performance of every players from both the teams, the ideal Dream11 team combination for this match would be 1 WK, 4 Batsman, 3 All Rounders and 3 Bowlers.

It is going to be a tough task to choose a Dream11 wicket keeper for this match.

Rishabh Pant hasn't been part of Playing XI for last two matches of DC and Alex Carey who replaced him has failed in both the matches.

MS Dhoni, has been consistent but has failed to convert his innings in big ones. However, in absence of ideal wicket keeper, it is advisable to go with just one Dream11 wicket keeper for this match. 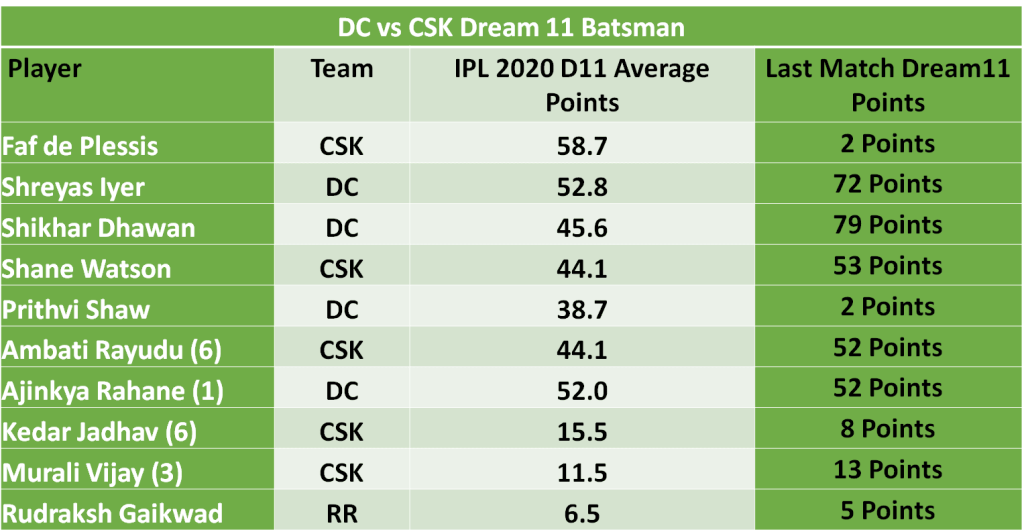 Both Chennai and Delhi have some of the excellent batsman. From Chennai, Faf du Plessis have been nothing less than a savior. He will be the very first choice as Dream11 batsman.

Next to Faf will be none other than Delhi's Captain Shreyas Iyer who has been outstanding with his batting as well as captaincy. He will be a great choice as Dream11 batsman.

Shikhar Dhawan is back in his form and has been great as an opener for DC. Having him as a 3rd Dream11 batman will be an asset for any Dream11 team.

Shane Watson, Prithvi Shaw and Ambati Rayadu have also been consistent in IPL 2020. For 4th and 5th Dream11 batsman any two from these three players will be a good choice.

Murali Vijay and Kedar Jadhav have been dropped from CSK's Playing XI and it is unlikely for them to be part of Playing XI for this match.

Choosing an all-rounder will again be a tough task but this time it is because the all-rounders of both the teams have had an excellent IPL season.

After Stoinis, Sam Curran from CSK will be the most preferred choice. Averaging over 50 Dream11 points per match, he is having a Dream run in this IPL season.

Ravindra Jadeja has been outstanding in his last match and Dwayne Bravo is also regaining his form. Together they average over 73 Dream11 points per match and are also a good options as Dream11 all-rounders.

Axar Patel too has been consistent with his performance in this IPL season while Shimron Hetmyer could not find his place in DC's Playing XI in last two matches. 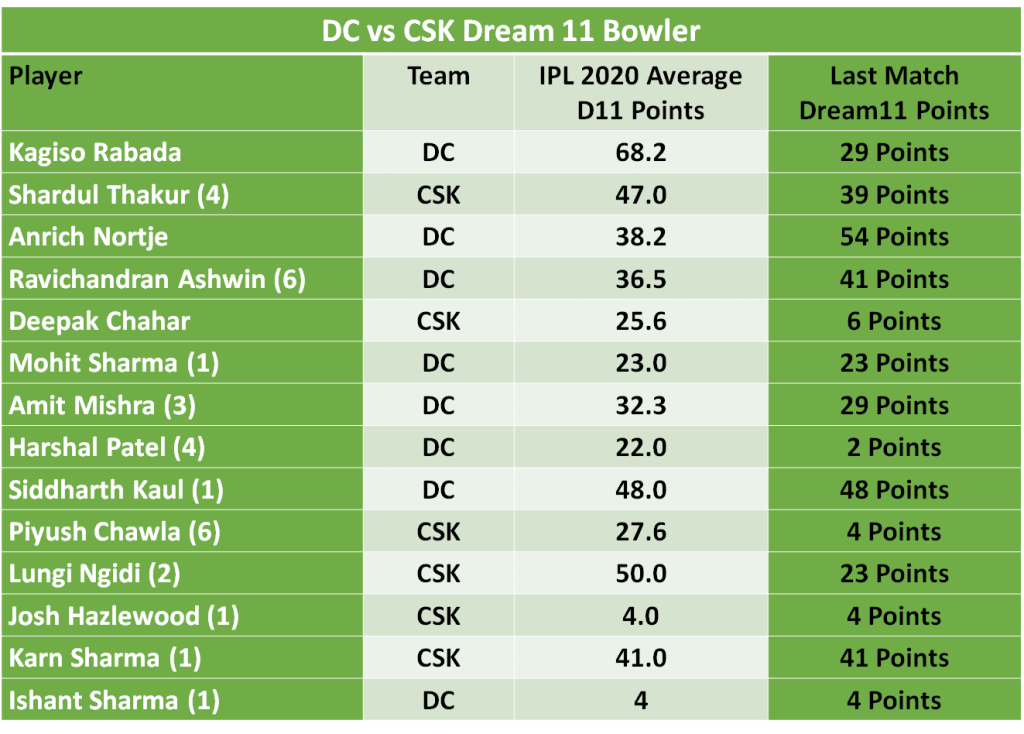 Kagiso Rabada has been a key player for Delhi Capitals. He has been impressive with his bowling and is one of the best choice as Dream11 bowler.

As other pace bowler, it will be good choice between Shardul Thakur and Anrich Nortje. Both have had good IPL 2020 season till date and having anyone from the two as Dream11 bowler will be an ideal choice.

R Ashwin has become an essential part of Delhi's bowling attack. His spin provides a great help for the pacers in middle over. He averages just over 36 Dream11 points per match and can be considered as 3rd Dream11 bowler.

Deepak Chahar is yet to give his best in this IPL season while Mohit Sharma has played only one match for Delhi in IPL 2020.

Ishant Sharma is yet to make a comeback after being dropped since 1st match.