SRH vs KKR Dream11 Team Predictions : Sunrisers Hyderabad takes on Kolkata Knight Riders on 18th of October in 35th match of Indian Premier League 2020. Both the teams have played 8 matches each in this seasons IPL.

Sunrisers Hyderabad have played two matches at Abu Dhabi this season. They lost one match against KKR while defeated the No. 2 placed Delhi Capitals in 2nd match.

KKR on the other hand have played 5 matches at Abu Dhabi. They defeated SRH, Kings XI Punjab and Chennai Super Kings while lost to Mumbai Indians and Delhi Capitals. 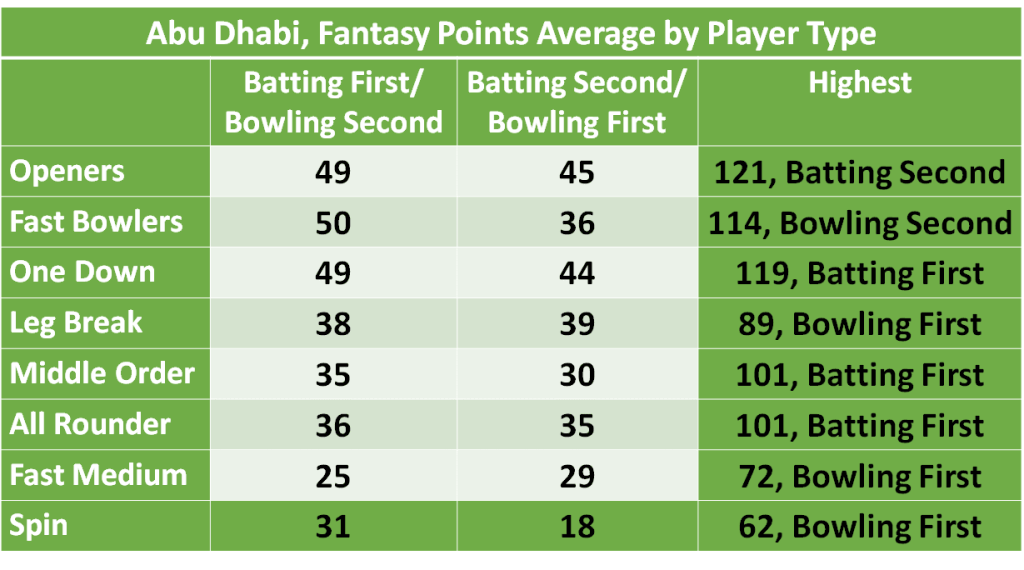 After analyzing the performance of each players from both the teams, the ideal Dream11 team combination for this match would be 1 WK, 5 Batsman, 1 All Rounder and 4 Bowlers.

Among the wicketkeepers from both the teams, Jonny Bairstow is having a better IPL 2020 season as compared to rest. Dinesh Karthik gave away his captaincy to Eoin Morgan in last match against MI so that he could concentrate on his batting. However, it did not make much difference in his performance.

As Dream11 wicket keeper is concerned, it will be wise to have only one wicket keeper. Jonny Bairstow seems to be an ideal choice for it.

Wriddhiman Saha and N Naik have played one match each for their respective teams and are unlikely to be part of Playing XI for this match.

David Warner had a disappointing last match against Chennai. He was out for only 9 runs. However, in most of the matches of IPL 2020 he did gave a good performance. As a Dream11 batsman, he will be the very first choice.

Next to Warner will be young prodigy Subhman Gill from Kolkata Knight Riders. He has been consistent with his form and is an ideal choice for Dream11 batsman.

Barring few matches, Manish Pandey is having a dream run in this IPL season. He has proved himself as a fine batsman and for Dream11 players he will be suitable option as a 3rd batsman.

Rahul Tripathi averages close to 39 Dream11 points per match while Eoin Morgan, the new captain of KKR averages close to 39 Dream11 points. However, Morgan has been very much consistent with his form while Tripathi barring one big inning have failed in rest of the four matches. Therefore, as 4th Dream11 batsman KKR's captain Eoin Morgan will be good option.

Kane Williamson too can be included in Dream11 team as 5th batsman. In last match he gave 84 Dream11 points and he averages over 30 Dream11 points per match.

Both Nitish Rana and Priyam Garg have disappointed with their performances and are a risky choice as Dream11 batsman.

All rounders from both the teams haven't been impressive at all. Vijay Shankar made a come back in Playing XI of SRH in last two matches but in both the matches he failed and could deliver a total of 28 Dream11 points in two matches.

As a Dream11 all-rounder for this match, Andre Russell can only be a good choice. However, even he has not been impressive in IPL 2020 season.

Abhishek Sharma was dropped from Playing XI of SRH in last match. Mohammad Nabi have played only one match and is unlikely to be part of Playing XI. 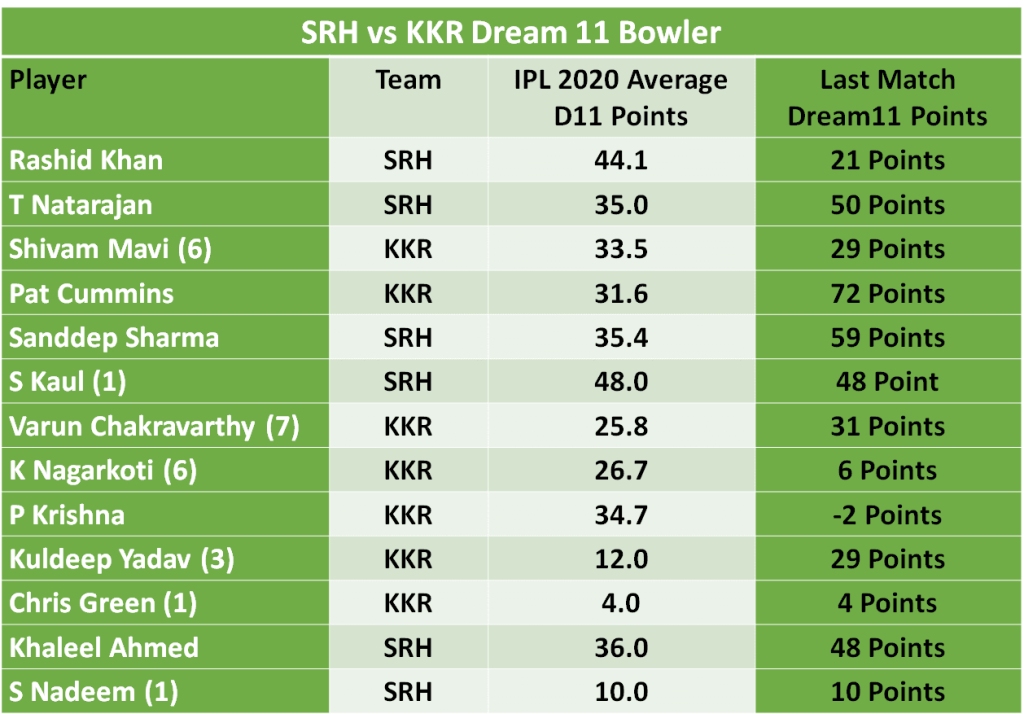 Choosing a Dream11 bowler for this match would be a real tough decision. However bowlers like Rashid Khan and T Natarajan from SRH and Pat Cummins from KKR can be trusted as 3 top bowlers for Dream11 team .

As fourth Dream11 bowler, either Sandeep Sharma or Khaleel Ahmed will be good option. The two youngsters have been consistent with their form IPL 2020 season.

In absence of star bowler, Varun Chakravarthy from KKR have turned into a lead bowler for the team. He too is an ideal choice as Dream11 bowler. Kamlesh Nagarkoti hasn't been able to impress in this IPL season.

Shivam Mavi was back in Playing XI of KKR for last match against MI but he could not contribute much for his team.

Bhuvneshwar Kumar has played only 4 matches for SRH in IPL 2020.