CSK vs RR Dream11 Team Predictions : Chennai Super Kings will take on Rajasthan Royals on Monday in 37th match of IPL 2020 season. For both the teams, IPL 2020 campaign hasn't been fruitful at all. Both have played 9 matches each in this season and have lost 6 matches and won 3. Looking at the points table and performance of the top placed team they are unlikely to make for the qualifiers.

The two teams will meet at Sheikh Zayed Stadium in Abu Dhabi.

Rajasthan Royals have played 3 matches at Abu Dhabi in this IPL season. They lost all the three matches against RCB, MI and DC respectively.

For Chennai Super Kings this will be 3rd match at Abu Dhabi. In first match they defeated Mumbai Indians while in 2nd match they lost to Kolkata Knight Riders.

Note : The below table contains Dream11 points by all the teams at Abu Dhabi Stadium 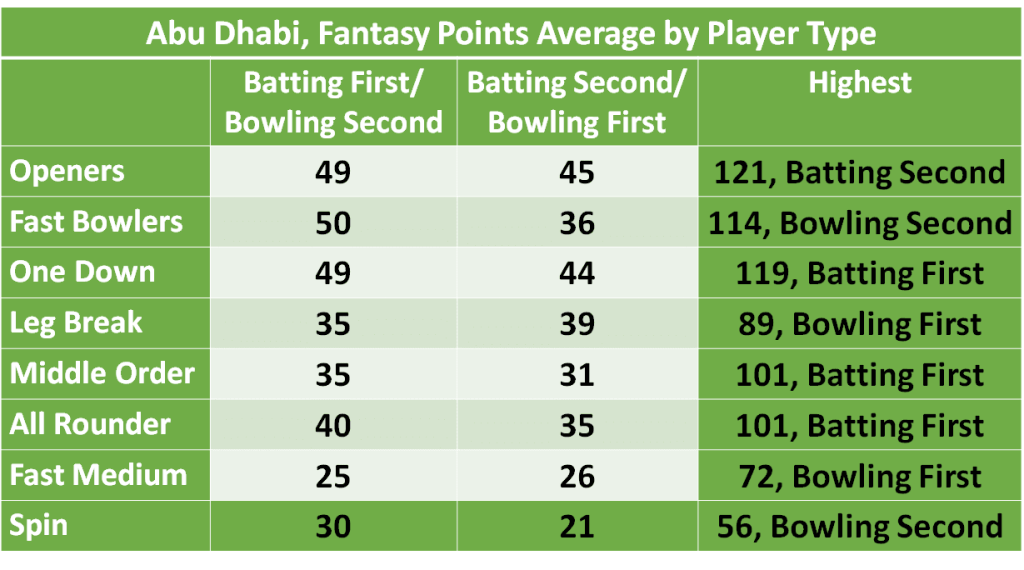 After analyzing the performance of each players from both the teams, the ideal Dream11 team for this match should have 1WK, 4 Batsmen, 3 All Rounders and 3 Bowlers.

Choosing a Dream11 wicket keeper for this match will be a tough task. Sanju Samson after few good matches initially has failed to carry on with the similar form. Jos Buttler has failed in almost all the matches. Chennai Super Kings' Captain MS Dhoni hasn't been impressive at all in IPL 2020 season.

As Dream11 wicket keeper, it is advisable to go with only one wicket keeper for this match. M S Dhoni has performed in alternate matches therefore he can be the 1st option as a wicket keeper. If not him, Sanju Samson or Jos Buttler could be made wicket keeper of Dream11 teams. 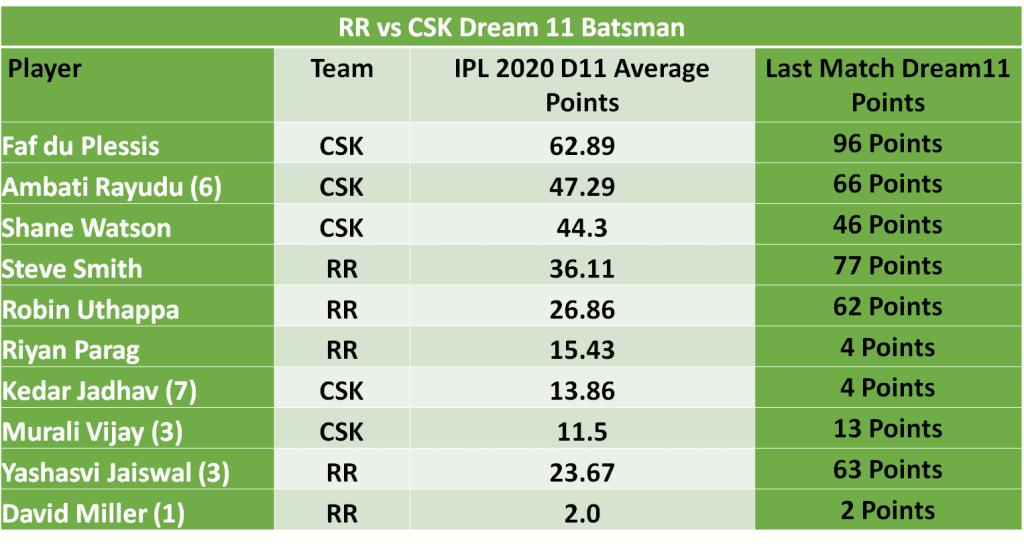 Despite CSK has been struggling as a team, two Chennai batsmen, Faf du Plessis and Ambati Rayudu haven't failed to perform in this season's IPL. Both the batsman have been outstanding with their form.

As a Dream11 batsman, the very first choice will be Faf du Plessis. Faf has been one of the best foreign players in Indian Premier League 2020. He has delivered close to 63 points per match in this IPL season.

Next to Faf will be his teammate Ambati Rayudu who played a good knock against Delhi Capitals in last match though his team lost the match. He gave 66 Dream11 points in last match and is 2nd best choice as Dream11 batsman.

Shane Watson too has been consistent in this IPL season. He has had a good batting performance in most of the matches. He is also an ideal choice as Dream11 batsman.

Rajasthan Royals though have failed in this IPL season, their captain Steve Smith has had a consistent batting form. He too is a good option as a 4th Dream11 batsman.

Robin Uthappa hasn't been much impressive this season while Riyan Parag despite being part of Playing XI in all the matches of RR in IPL 2020 has disappointed with his performance. Both are risky choice a Dream11 batsman.

Both Chennai and Rajasthan have some of the best all-rounders and they have had quite a good IPL 2020 season.

Rajasthan Royal's young prodigy Rahul Tewatia has been outstanding with his all-round performance. He averages 57 Dream11 points per match and will be the best choice as Dream11 all-rounder.

Both Ravindra Jadeja and Sam Curran have been quite impressive. They together average over 81 Dream11 points per match and are ideal options for 2nd and 3rd Dream11 all-rounder.

Dwayne Bravo too is back in his form. He too can be considered in Dream11 team.

Ben Stokes is yet to deliver and he is quite a risky option to be part of Dream11 team. 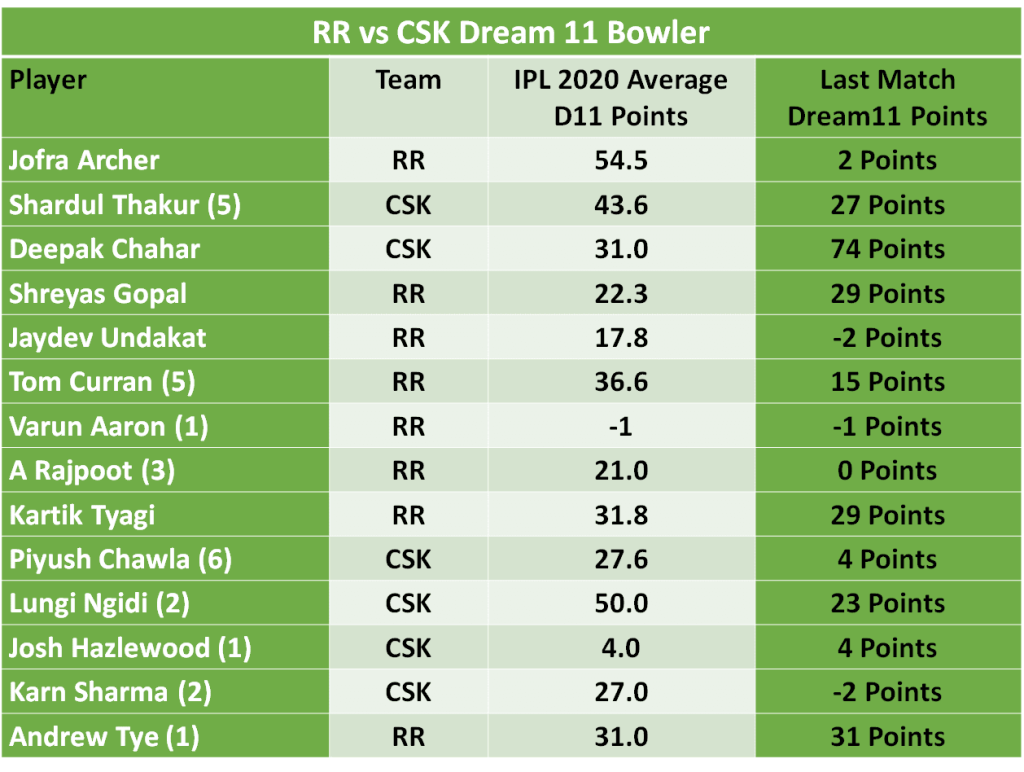 On of the toughest choice will be choosing a Dream11 bowler for this match. Barring Jofra Archer none of the bowlers from both the teams have been impressive in this IPL season.

Jofra Archer who averages over 54 Dream11 points per match will be the first choice as Dream11 bowler.

Next to Archer will be young prodigy from Chennai, Shardul Thakur who has been quite consistent with his bowling performance. He averages close to 44 Dream11 points per match.

Deepak Chahar who gave 74 Dream11 points in his last match will be the best choice as 3rd Dream11 bowler. He hasn't been the best but has had some good matches and has shown potential of being one of the best bowlers.

Tom Curran hasn't had a good show in this season's IPL and same is the case with CSK's Piyush Chawla who struggled to deliver a good performance in IPL 2020 season.