DC vs KXIP Dream11 Team Predictions: Delhi Capitals and Kings XI Punjab will clash against each other for the 2nd time in IPL 2020 on 20th October. Both teams have played one match against each other in this season and the result of the match was decided in Super overs. Delhi beat Punjab in Super overs. The two teams have played 9 matches each in this season's IPL. Delhi Capitals with 7 win and just two losses are the leaders in points table while Punjab with 6 losses and 3 wins are at No. 6 in points table.

Punjab have won last two of their matches after continuous defeats in 5 matches. To enter the playoffs, Punjab needs to win all of their remaining 5 matches. Delhi Capitals have almost qualified for the qualifiers and a win in this match will further strengthen their position in IPL 2020 points table.

Dubai International Cricket Stadium will be hosting the two teams.

Delhi Capitals have played total four matches at Dubai International Cricket Stadium in this IPL season. They won all the four matches that they played here. First match they won against Punjab itself which was followed by victory against Chennai Super Kings, Royal Challengers Bangalore and Rajasthan Royals respectively.

Kings XI Punjab have played 5 matches at Dubai this season. They won two matches, one against RCB and 2nd on last Sunday against Mumbai Indians in Super overs.

They lost to Delhi Capitals, CSK and Sunrisers Hyderabad respectively.

NOTE : The Dream11 points in below table is from all the matches played at Dubai by all the teams participating in IPL 2020 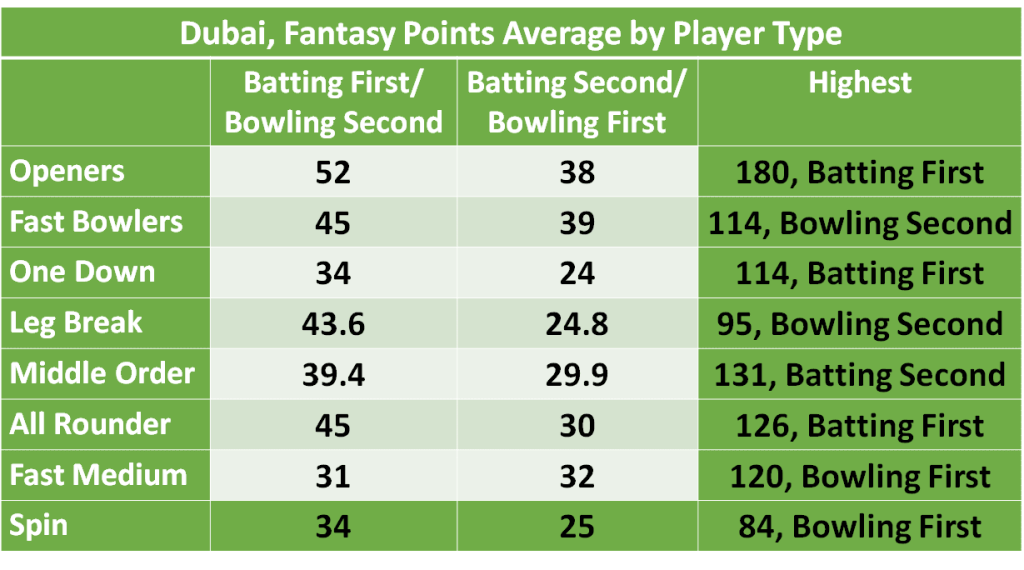 Which Players have performed the best against DC in Dubai? 1. Openers (44.6 average Dream11 points), 2. Fast Bowlers (96.5, but only two have played against them so far), 3. Leg Break Bowlers

After analyzing the performance of each players from both the teams, an ideal Dream11 team for this match should have 2 WKs, 4 Batsmen, 2 All rounders and 3 Bowlers.

Kings XI Punjab's K L Rahul and Nicolas Pooran have been outstanding in IPL 2020. KL Rahul is having his best IPL season. He averages close to 87 Dream11 points per match and is the first choice as Dream11 wicket keeper.

Nicolas Pooran has been consistent with his form and has played very good knock for his team in middle order. He cannot be missed as 2nd Dream11 wicket keeper.

Rishabh Pant is out due to injury and is unlikely to be fit for this match. Alex Carey is a very risky choice as Dream11 wicket keeper.

Both Delhi and Punjab have some of the excellent batsmen. With Chris Gayle back in side, the batting line up of KXIP have turned out to be strong .

As a Dream11 batsman both Mayank Agarwal and Chris Gayle from KXIP are an ideal choice. Together they average close to 117 Dream11 points per match.

Captain Shreyas Iyer of Delhi and Shikhar Dhawan cannot be neglected. Shreyas Iyer is having an excellent season while Dhawan has been outstanding in last three matches.

Prithvi Shaw after initial good performance is unable to continue with same form. Ajinkya Rahane needs to play a big innings. Both at present aren't good choice for Dream11 batsman.

Mandeep Singh played 3 matches for KXIP but was unable to impress with his performance.

As all-rounders, two Delhi Capitals teammates Marcus Stoinis and Axar Patel have been very impressive. They both make a good combination as Dream11 all-rounders.

Glenn Maxwell has been economical with ball but is unable to pick up wickets. In batting he has been a complete failure, thus making him unsuitable choice as Dream11 all-rounder. 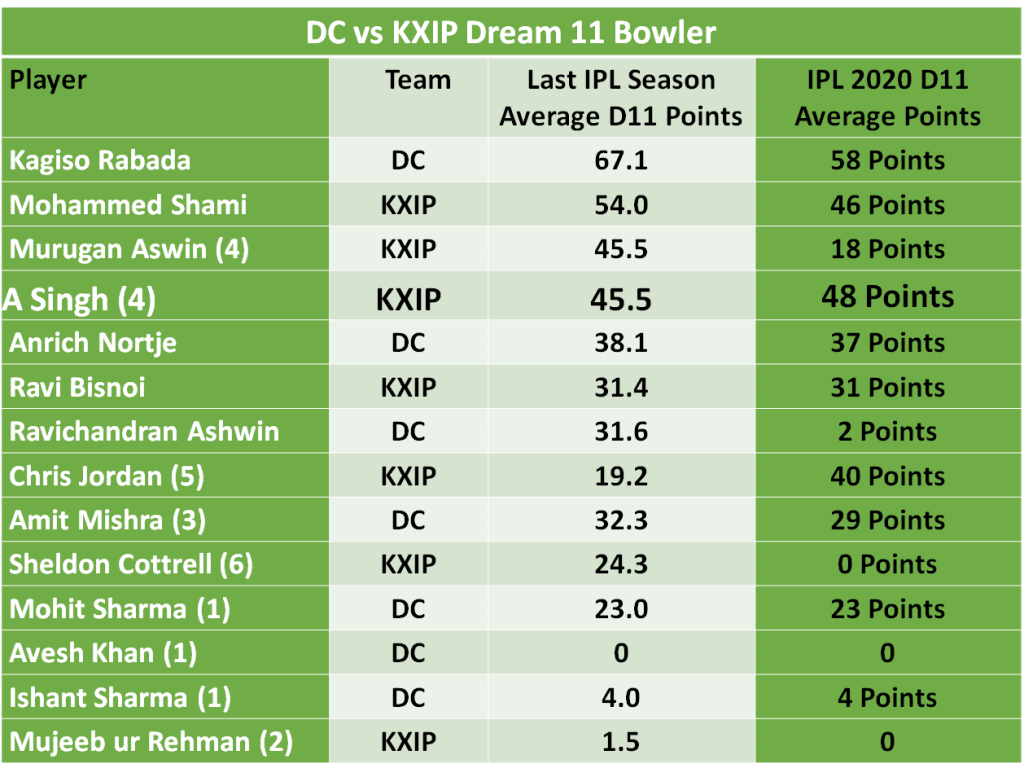 In bowling the very first choice as Dream11 bowler would be Delhi Capitals Kagiso Rabada. He along with Anrich Nortje have been a great opening bowlers for Delhi Capitals. Rabada averages over 67 Dream11 points per match.

Next to Rabada will be none other than Mohammad Shami from KXIP. He has been outstanding in this IPL season and is one of the best choice as Dream11 bowler.

Arshdeep Singh the young prodigy from Punjab too cannot be ignored. He too can be an ideal choice as Dream11 bowler.

Murugan Ashwin, Anrich Nortje, R Aswin and Ravi Bishnoi have been very much consistent in IPL 2020 season. Anyone from them in Dream11 team will be a great asset.

Sheldon Cottrell and Mujeeb ur Rahman have been dropped from the KXIP's Playing XI and are unlikely to be part of it for this match.