MI vs CSK Dream11 Team Predictions : Chennai Super Kings takes on Mumbai Indians Tonight at the Sharjah Cricket Stadium. Chennai Super Kings for the first time in their IPL history are staring at the league stage exit. They have four more more matches to play including this match and even if they win all the four matches they will have to depend on others result to make to the playoffs. The absence of Suresh Raina is highly felt in CSK's middle order batting.

Mumbai Indians on the other hand after 9 matches they are at 3rd position in IPL points table. If they win this match they will be back to 2nd position and thereby increasing their chances of qualifying for the playoffs.

The two teams will clash against each other in Sharjah Cricket Stadium. Prior to this the two teams came face to face in the very first match of IPL 2020. Chennai Super Kings defeated Mumbai Indians by 5 wickets.

Mumbai Indians have played only match at Sharjah in this IPL season. They played against Sunrisers Hyderabad which they won by 34 runs.

Chennai on the other hand have played 2 matches at Sharjah. They lost both the matches. First against Delhi Capitals and next against Rajasthan Royals.

Note : The Dream11 points in below table are for all the matches played at Sharjah in IPL 2020. 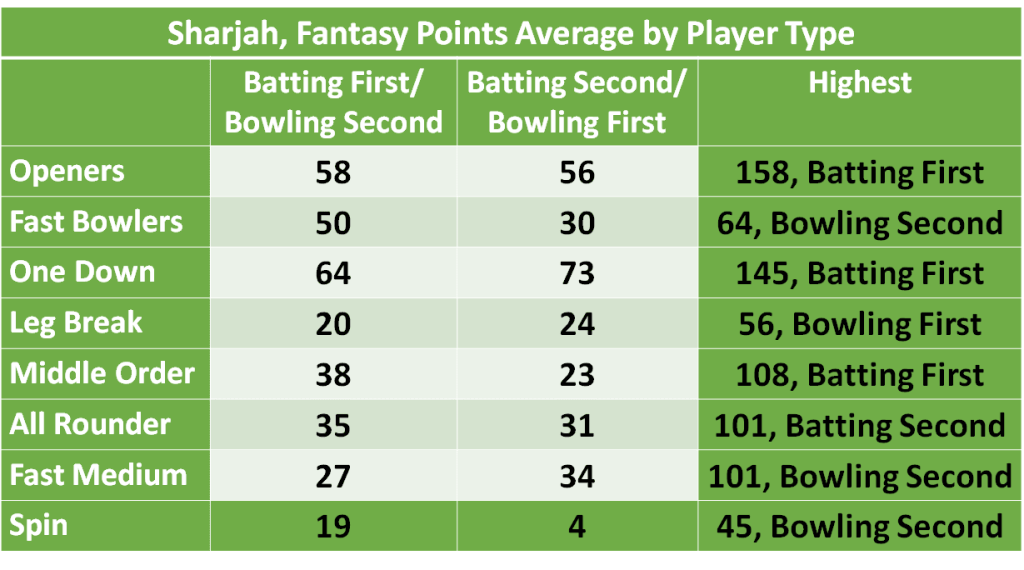 CSK vs MI Dream11 Team Predictions : Players who performed well in Other Grounds but not in Sharjah

Analyzing the performance of each players from both the teams, the ideal Dream11 team combination for this match would be 2 WKs, 4 Batsman, 2 All-rounders and 3 Bowlers.

The Dream11 players have a good options to make their choice for Dream11 wicket keeper for this match.

Quinton de Kock has been exceptional in this IPL season. He has impressed with his performance in almost all the matches this season. He averages close to 60 Dream11 points and will be the first preference as a Dream11 wicket keeper.

Next to de Kock will be CSK captain MS Dhoni. CSK has disappointed with their performance but as a Wicket keeper batsman, MS Dhoni has been consistent with his performance. This makes him a good choice for Dream11 wicket keeper.

Young Ishan Kishan started his IPL 2020 campaign on a high note. However, he is unable to continue with the same form in last few matches. Though a great talent, he has somewhat become a risky choice as Dream11 wicket keeper. 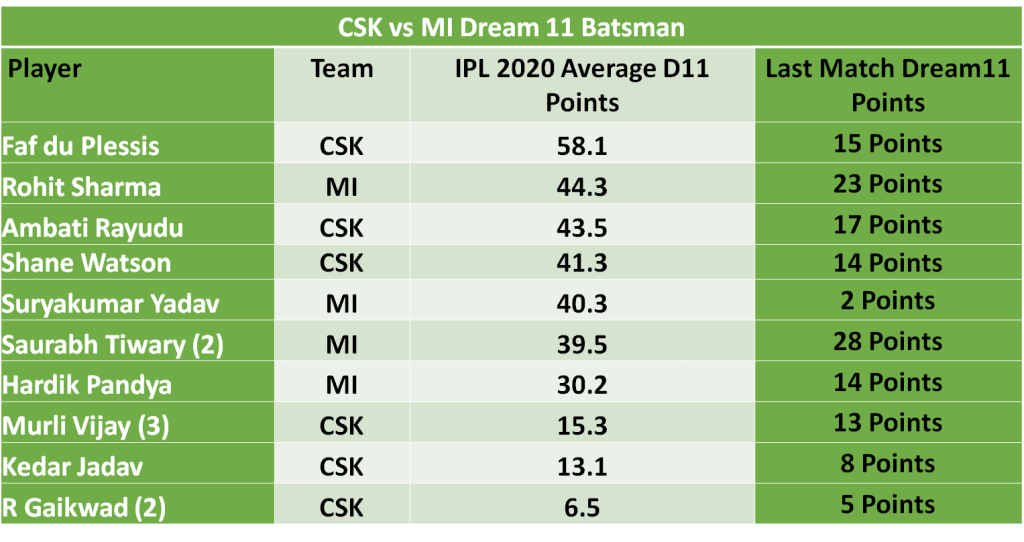 Chennai's Faf du Plessis is one of the best batsman of IPL 2020 season. In last match against Rajasthan he could not contribute much for his team but he has been exceptional with his performance in almost all the matches this season. He is the first preference as Dream11 batsman.

Mumbai Indian's Captain Rohit Sharma will make good Dream11 batsman. His batting has been consistent and ignoring him will be the last option for any Dream11 player. He averages over 44 Dream11 points this IPL season.

Next to Rohit Sharma would be the two CSK teammates, Ambati Rayudu and Shane Watson. Both have been consistent with their batting performance. Together they average around 84 Dream11 points per match this IPL season and are great asset as Dream11 batsman.

Mumbai Indian's Suryakumar Yadav have had some good performance this IPL season. He too can be preferred as Dream11 batsman.

Hardik Pandya has mostly failed in this IPL season and is a risky choice to have him in Dream11 team.

CSK's Sam Curran will be the very first choice as Dream11 all-rounder followed by his teammate Ravindra Jadeja. Together they average close to 88 Dream11 points per match this IPL season.

Looking at performance of Krunal Pandya having him in Dream11 team would not be a right choice. Even Kieron Pollard barring few matches hasn't been impressive with his performance.

Dwyane Bravo is out of Indian Premier League due to his groin injury.

Mitchell Santner hasn't played any match in this IPL season. He may play in place of Dwayne Bravo. 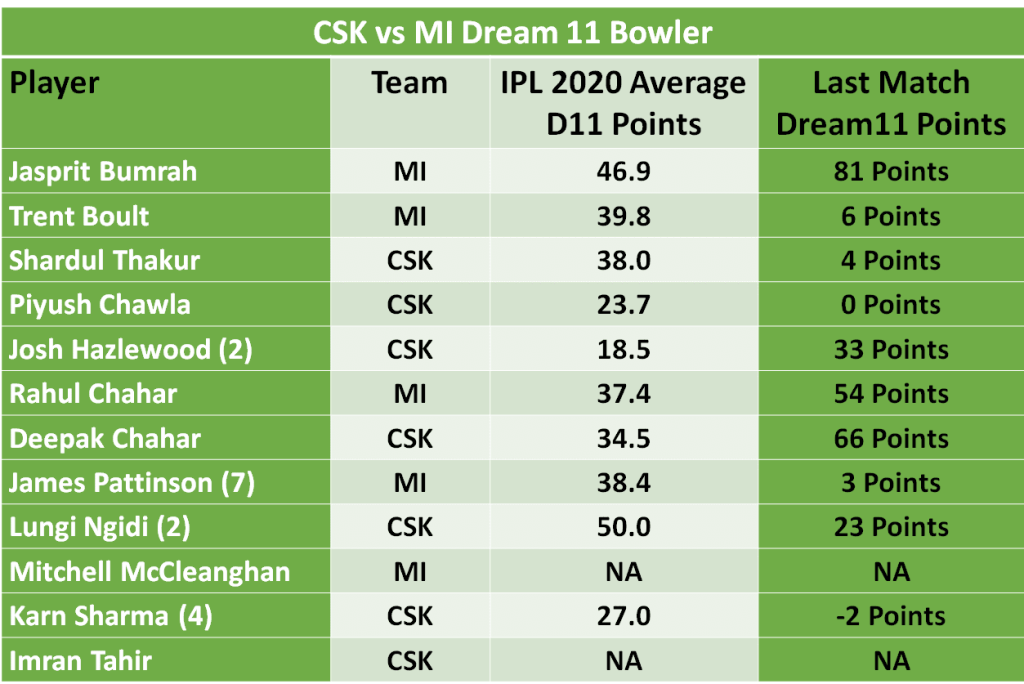 As a bowler, Dream11 players have several options to choose from. Both the teams have some exceptional bowlers who have been impressive with their overall performance this IPL season.

The very first choice as Dream11 bowler would be Jasprit Bumrah. Bumrah who leads the MI's pace attack averages close to 47 Dream11 points per match this IPL season. In his last match against KXIP he gave a whopping 81 Dream11 points.

Bumrah will be followed by his teammate Trent Boult who has been consistent till now. Boult did fail to contribute much for his team in last match against KXIP but he has impressed with his bowling this IPL season.

Nathan Coulter Nile has been part of Mumbai Indian's Playing XI in last matches. However, he is a risky choice as Dream11 bowler.