SCO vs STA Dream11 Team Predictions: Perth Scorchers is set to play Melbourne Stars in the 9th game of the Big Bash League at the UTAS stadium. Scorchers lost their first game convincingly by 7 wickets whereas Melbourne Stars have been unbeaten in two matches with wins coming against Brisbane Heat and Sydney Thunder.

Looking at their head-to-head, they have played each other on 16 occasions with the teams sharing 8 wins apiece suggesting a close battle on Thursday. In their last meeting, Stars managed to trump the Scorchers by 10 runs at the MCG.

After analyzing the performance of each player in the recent past, it would be ideal to have an eleven with 1 WK, 3 Batsmen, 4 All-rounders and 3 bowlers.

Ben Dunk has been an invaluable asset for the Stars given that he brings so much to the table. Even though he has just scored 22 runs in two games, he has been sharp with the gloves.

Seb Gotch who is currently benched has plenty of experience having played 28 games with decent record behind the stumps and valuable contribution coming down the order.

For Perth Scorchers, Josh Inglis is the No.1 wicket-keeper for the side who departed early in the game against Renegades. He has a strike rate of 146.32 at the top order making him a threat to the opposition.

He can be replaced by Joe Clarke who has been playing as the pure batsman for the side. He contributed with 13 points in the first game.

Looking at the batting of Stars, Andre Fletcher who has come in place of Jonny Bairstow needs to get going for the side to get off to a great start. He has striked at 115 in two games but has got out pretty quickly.

Nick Larkin had a great opportunity to get himself in and play a big innings. But he failed to capitalize as he managed to just contribute 15 points versus Thunders.

For Scorchers, Colin Munro will be the one who should take initiative and provide them a huge start in the powerplay. Even though he fell for a duck in the first game, he is someone who can play a match changing innings.

Mitchell Marsh who is playing the batsman role should play responsibly instead of just going for the glory shot every time. He has close to 1259 runs in 48 games at a strike rate of 129.53 and is longing to find the meat of the bat.

Cameron Bancroft who plays at 5 or 6 needs to up his strike rate and play as many shots as possible. The 27-year Australian has the potential and the power to get the team to a good total.

Marcus Stoinis has yet again delivered for the stars with an explosive 61 runs off just 37 deliveries thereby giving 71 points with the bat. The 7th highest run aggregator in BBL will be looking to repeat his 2019 heroics for the stars.

Glenn Maxwell has one of the best strike rates in BBL along with his contributions from the ball. He scored a handy 39 at 134.48 along with bowling the first over.

Hilton Cartwright is the batting all-rounder who provides valuable runs in the middle in addition to his medium pace bowling. Hinchliffe is the bowling all-rounder who gives the chinaman option in the side and can hit the ball very hard.

Ashton Turner was playing really well for the Scorchers but was unlucky to get run out against Renegades. The skipper has more than 1000 runs in 68 BBL games along with 11 scalps at a decent economy.

Aaron Hardie played a very responsible innings that took the team to a respectable total after an unexpected collapse. The bowling all-rounder from Dorset has taken 2 wickets in 3 games and is a future prospect.

Jhye Richardson possesses slogging skills apart from his cutters and slow bouncers. He pitched in with 2 wickets in the last game, contributing 50 points with the ball.

Billy Stanlake is the Stars’ frontline pacer who has pace and extracts extra bounce from the deck. He has been responsible for 34 dismissals at a decent economy of 7.99 in 41 games.

Adam Zampa is the X-factor bowler in the eleven who bowled one of the best spells in his career where he conceded just 10 runs and took two important wickets, delivering 50 dream 11 points.

Liam Hatcher was a surprise package for the Thunder as the youngster ripped apart the lineup with 3 scalps for just 28 runs.

Dilbar Hussain is another underrated pacer who as taken 21 wickets in 17 T20s at an economy of 8.77 so far. Lance Morris couldn’t make the most of the limited opportunities that he had got last time around as he managed just one wicket in 5 outings. The 22-year medium fast pacer will be looking for a breakthrough season this time around.

As far as Perth Scorchers are concerned, the bowling line up has the services of Jason Behrendorff, Andrew Tye and Fawad Ahmed.

Andrew Tye. He deceives the batters with his slow deliveries and cutters along with a surprise stock delivery. Even though he was wicketless in the first game, he will make an impact for the side.

Fawad Ahmed is the wrist spinner in the side who is extremely accurate that doesn’t allow the batsmen to come down the track. He bowled a good spell against Renegades where he took the important wicket of Sam Harper and contributed 25 points with the ball. Joel Paris who was not part of the eleven is also a growing talent in the T20s who can be vital with the new ball.

The betting forums and the prediction websites are suggesting a comfortable win for the last year runners-up Melbourne Stars.

According to Bet365, Stars have been given odds of 1.66 whereas the hosts have 2.30 odds stacked against them. Another platform Betway have also predicted Melbourne Stars to come out in flying colors with an outside chance given to their opponents. 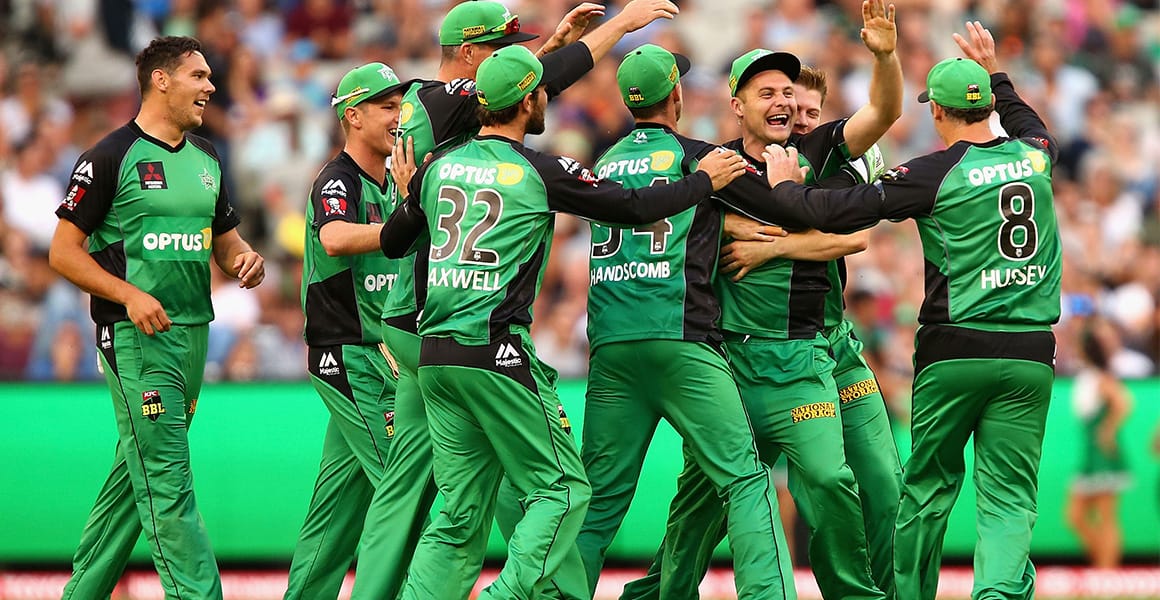 SCO vs STA Dream11 Team Predictions: Where to watch?

The Big Bash League game between Strikers and Hurricanes will be live telecasted on Sony Network for the Indian cricket fans. The matches will be streamed on Sony Six and Sony HD apart from the Sony LIV app.