SRH vs MI Dream11 Team Predictions : Sunrisers Hyderabad takes on Mumbai Indians on Tuesday. This will be the last IPL 2020 league match for both teams. Mumbai Indians have already qualified for the qualifier therefore even a defeat will not make much difference to their position in Indian Premier League Points Table.

Sunrisers Hyderabad on the hand need to win this with a bigger margin in order to qualify for the playoffs. Therefore, for David Warner led SRH this is a do-or-die match.

Sunrisers Hyderabad have played only 2 matches at Sharjah in IPL 2020 season. They lost the first match against Mumbai Indians and won the second match against Royal Challengers Bangalore.

Mumbai Indians too have played only 2 matches at Sharjah this season. They won the both matches. This will be the 3rd match for both the teams at Sharjah and 2nd match between them at Sharjah.

After analyzing the performance of each players the ideal Dream11 team for this match should include 2 WKs, 3 Batsman, 2 All Rounders and 4 Bowlers.

Wriddhiman Saha has been included in Playing XI since last two matches instead of Jonny Bairstow. In both the matches he has been able to impress with his batting as well as wicket keeping.

Mumbai Indians' Quinton de Kock has been one of the best Wicket keeper batsman this IPL season. In terms of Dream11 points, he has delivered around 57 points per match and in last match he gave 60 Dream11 points.

Ishan Kishan has been the most promising batsman. He has been opening for Mumbai Indians since Rohit Sharma has been out due to injury. In last match against Delhi Capitals he gave whopping 98 Dream11 points.

For Dream11 team two of these top 3 players can be considered or all the 3 can be made part of the team.

Rohit Sharma is out due to injury and is unlikely to play even in this match. For Dream11 team, the very first choice as Dream11 batsman will be none other than SRH's captain David Warner. Warner has led from front and his team will be expecting his to play a good knock even today so that SRH qualifies for the qualifiers.

Suryakumar Yadav has been awesome with his batting this IPL season. He has been a great support for MI batting line up. Coming in one down, he has tried to play put up a good partnership with the openers in most of the match. In Dream11 team, he will be a great asset.

Manish Pandey is the other batsman who has been strength for his team. At an average of almost 35 runs per match, he has scored 380 runs this IPL season. He has been consistent and is a good choice as Dream11 batsman.

Abdul Samad has disappointed so has Kane Williamson. Both are risky choice as Dream11 batsman.

Hardik Pandya was rested in last match against Delhi Capitals and may not play even in this match.

With inclusion of Jason Holder in Playing XI of Sunrisers Hyderabad, the issue of having an ideal all-rounder for Dream11 team has been solved to some extent. Holder has been excellent in all the four matches that he played this IPL season. He will be the first choice as Dream11 all rounder.

Kieron Pollard who has been leading Mumbai Indians in absence of Rohit Sharma has also been consistent. Barring few matches he has impressed a lot with his all-round performance. This season he has delivered over 35 Dream11 points per match and will be a good choice as Dream11 all-rounder.

Krunal Pandya has disappointed a lot. Having him in Dream11 team is quite risky.

Vijay Shankar looked in form after he was included in Playing XI in last few matches. However, in last match against RCB he was not part of the Playing XI once again. Therefore, it would be better to not have him in Dream11 team.

Mohammad Nabi played just one match for SRH and there is very less chance of him playing in this match too and Anukul Roy from MI is yet to make his debut. 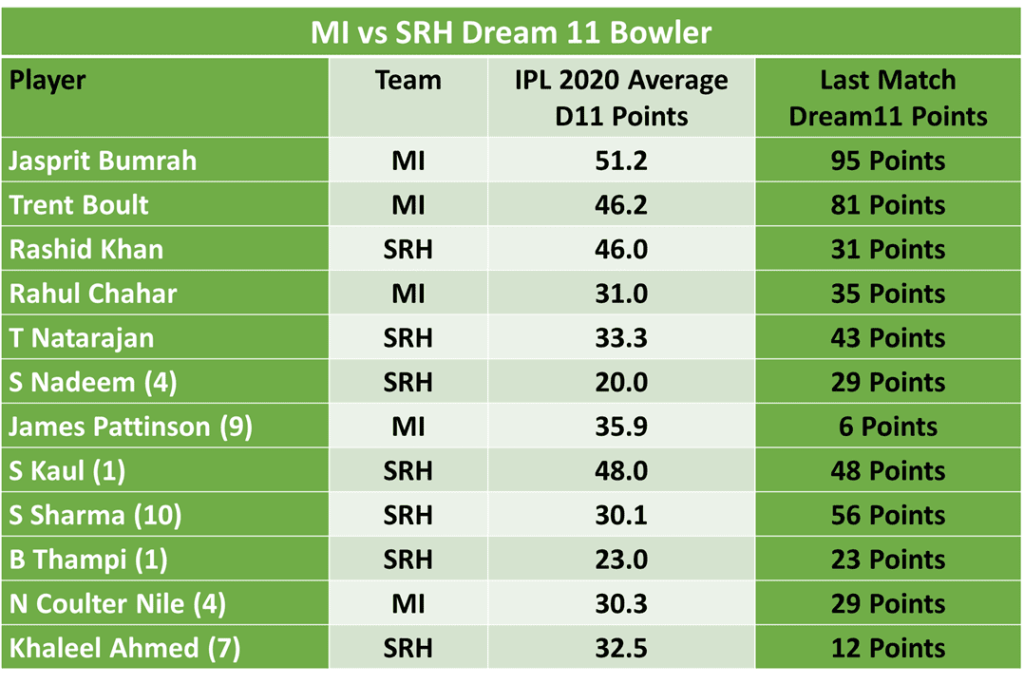 The pace attack of Mumbai Indians, Jasprit Bumarah and Trent Boult have been in great form this IPL season. Both have contributed alot in Mumbai Indian's outstanding performance this IPL season. Together they have delivered over 98 Dream11 points per match. They will be the first choice as Dream11 bowlers.

The Afghan youth Rashid Khan has been leading bowler for SRH this IPL season. As a Dream11 bowler he too becomes an ideal choice.

Deepak Chahar has been a great help as bowler for Mumbai Indians. On the other hand T Natarajan from SRH has also been excellent this IPL season. Both will make a good Dream11 bowler.

Nathan Coulter Nile is yet to impress with his bowling therefore is a risky choice as Dream11 bowler.

James Pattinson is unlikely to play even in this match and so is the case with Bhuvneshwar Kumar.

Prince Balwant Rai, Digvijay Deshmukh and Mitchell McClenaghan are yet to make debut this IPL season for Mumbai Indians.