Bihar Election 2020 Latest Updates : The voting for the 2nd phase of Bihar election will take on 3rd November 2020. A total of 93 seats are on stake in this phase of polling.

In first phase voting for 71 seats have already concluded. Bihar election is to be conducted in 3 phases with last phase to be held on 7th Noveber. The result will be declare on 10th of November.

To Track who is winning, click here (Ground data is updated regularly)

In first phase of Bihar Election voting for 71 Assembly seats from 16 discticts are taking place.

In Bhagalpur district two Assembly constituencies are going in for poll, Kahalgoan and Sultanganj.

Elections in all seats of Banka, Munger, Jamui, Lakhisarai, and Sheikhpura District taking place in first phase of elections:

4- Paliganj- CPIML is wining . 5- Bimkram- Congress is winning 6- Arwal- CPIML has edge in close contest with BJP. 7- Kurtha- RJD has edge in Kurtha.

All ACs of Aurangabad, Gaya and Nawada district of Magadh Region of Bihar go in for polls in First Phase

Seatwise Predicted Winner in all assembly constituencies of Aurangabad, Gaya and Nawada district

There is a significant drop in Young voters

PM Modi today spoke about Bihari pride and brave Bihari soldiers in Galwan and Pulwama. Tejashwi Yadav today attacked the NDA accusing the alliance of bringing up issues like religion and caste instead of speaking about development.

A new Times Now CVoter survey has found that 20% of voters are yet to decide whom to vote.

There is no escape from Bahubali netas in Bihar elections, read this from India Today.

The Latest Crowdwisdom360 analysis of Google Searches shows RJD surging. If the formula remains the same as 2019 Lok Sabha election, both alliances could end up with almost equal vote share.

BJP had strongly attacked LJP and Chirag Paswan over the last 2 days because Nitish apparently warned BJP that their alliance could be impacted. Chirag Paswan once again attacked Nitish Kumar for trying to create misunderstanding between LJP and BJP

The Lok Janshakti Party (LJP) Released its second list, many of its candidates are ex-BJP leaders

The RJD alliance (Mahagatbandhan) has released the name of all 243 candidates across the state.

The Election Commission has said that Analysts, Tarot readers, astrologers are not allowed to predict the results of an election during voting period. There is a ban on exit polls and opinion polls during this period

Nadda takes swipe at Tejashwi, says ‘son’ should know how his father ruled

Rahul Gandhi to campaign in all three phases of Bihar election.

In first phase of Bihar election, 153 Crorepatis in fray.

Bihar Election 2020 is a direct fight between two alliance. National Democratic Alliance led by JDU in Bihar and Mahagathbandhan led by RJD in Bihar.

Chirag Paswan's Lok Janshakti Party split up from NDA in Bihar and his party will be contesting on 135 seats in upcoming Bihar election.

In 2015, BJP fought in the name of Prime minister Modi on the other hand grand alliance fought under the leadership of Nitish Kumar and his 'good' governance. In the absence of a strong opposition face and a solid caste alliance, the grand alliance of Congress, RJD and JDU won a thumping majority in the 2015 elections by capturing 178 seats out of 243.

After the win of 2015, things didn’t go smoothly for the “Sushasan Babu” due to continues allegations of corruption against his government and charges on Lalu Yadav’s fodder scam. In 2017 charges of corruption were leveled against his Deputy CM Tejashwi Yadav.

CM Nitish Kumar broke from the grand alliance rejoined National Democratic Alliance. In 2019, NDA performed well in Bihar in Lok Sabha elections in 2019 by wining 39 seats out of 40. However, the state politics was not favourable to the NDA and Nitish. 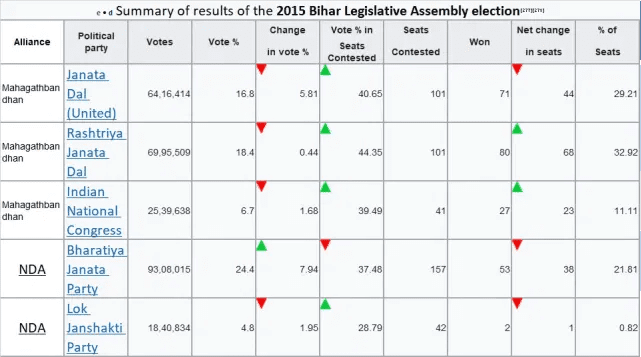 As per the latest Opinion poll published by Crowdwisdom360 covering 83 seats of 10 Districts namely, Muzaffarpur, Nalanda, Gaya, Patna, Samastipur, Banka, Araria, Paschim Champaran and Madhubani, NDA is ahead in 38 Assembly seats while RJD+ is ahead in 48 seats.

List of the Assembly Constituencies going to polls in Phase-1: 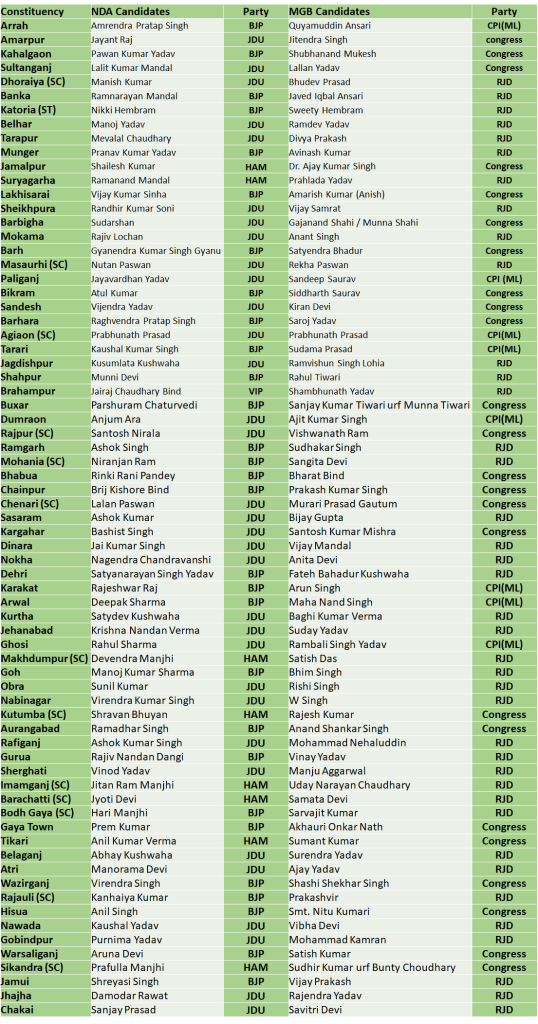 Bihar Assembly Election 2020 Alliances and Candidates : Result of Phase I in 2015

List of the Assembly Constituencies going to polls in Phase -2

List of the Assembly Constituencies going to polls in Phase -3