MI vs KXIP Dream11 Team Predictions : This Super Sunday will witness the clash of No. 1 team of IPL 2020, Mumbai Indians and the last placed team of IPL 2020 in points table, King XI Punjab.

Mumbai Indians are undefeated in last five of their IPL 2020 matches while Kings XI Punjab finally registered a victory in last match against RCB after 5 consecutive losses. It was their 2nd victory of IPL 2020 season.

In total 8 matches have been played by both the teams in this season's Indian Premier League, Mumbai Indians have won 6 matches while Kings XI Punjab have lost 6 matches and won only 2 matches.

The two teams will clash against each other in 36th match of IPL 2020 at Dubai International Cricket Stadium.

Mumbai Indians have played only one match at Dubai in this IPL season. They lost the only match that they played here against Royal Challengers Bangalore in Super Overs.

Kings XI Punjab on the other hand have played 4 matches at Dubai International Stadium this season. They won one match against RCB while lost the rest of the 3 matches against Delhi Capital, Sunrisers Hyderabad and Chennai Super Kings respectively.

Note : The Dream11 points in the below table is for all the matches played at Dubai International Stadium in IPL 2020. 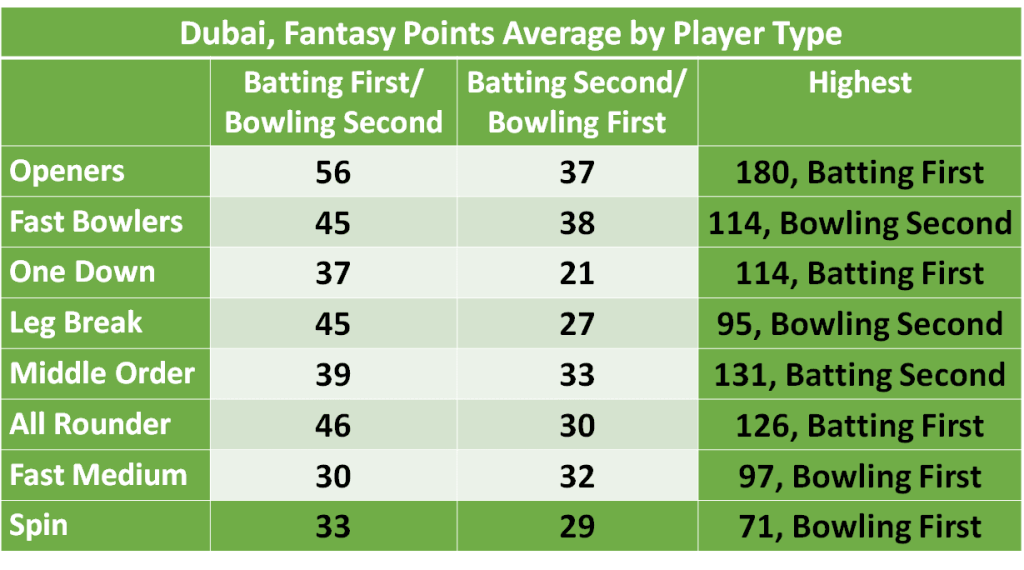 After analyzing the performance of every players from both the teams, the ideal Dream11 team suggestion for the match will be 3 WKs, 4 Batsmen, 1 All Rounder and 3 Bowlers.

Dream11 Players can even opt for 2 WKs, 5 Batsman, 1 All rounder and 3 Bowlers for this match.

Both Mumbai Indians and Kings XI Punjab have some of the excellent Wicket keeper batsman.

For Dream11 players it will be and easy option to pick minimum three players as a Dream11 wicket keeper.

KXIP's Captain K L Rahul has been exceptional in this IPL season. He has averaged over 84 Drea11 points per match and in last match against RCB he delivered a massive 100 Dream11 points. He will be the first choice as Dream11 wicket keeper.

Quinton de Kock is one of the best foreign players in IPL 2020 season. He has been in great form in almost all the matches of IPL 2020. He cannot be ignored as a Dream11 wicket keeper.

Next to him will be either Ishan Kishan or Nicholas Pooran. Both have been consistent with their good form and can be ideal choice as Dream11 wicket keeper. 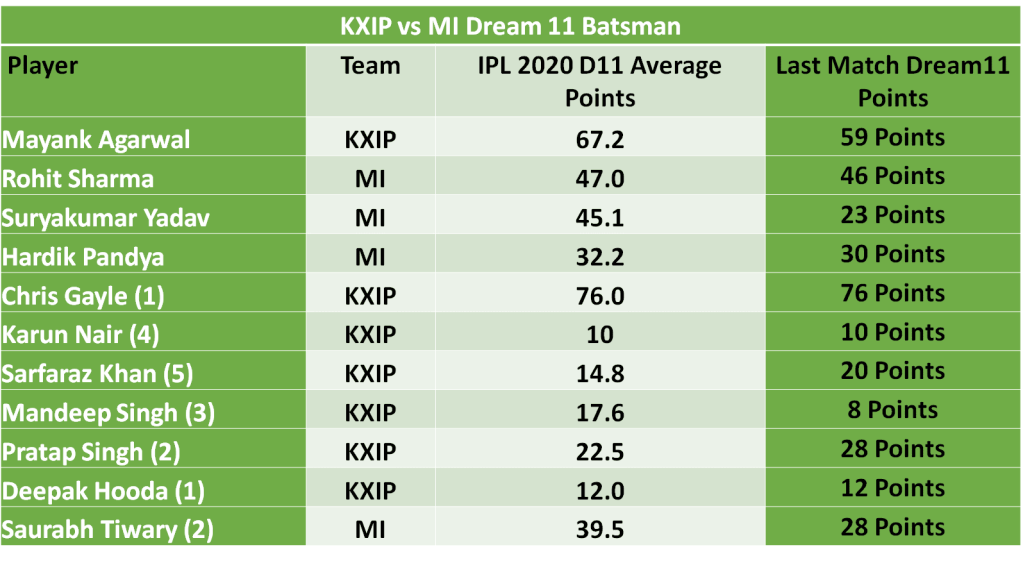 Mayank Agarwal from KXIP and Rohit Sharma, Captain of Mumbai Indians are two batsmen who cannot be missed in Dream11 team. Together they average over 114 Dream11 points per match and are the best choice as 1st two Dream11 batsmen.

Suryakumar Yadav has been very much consistent with his batting in IPL 2020. He is one of the best fit as 3rd Dream11 batsman.

Chris Gayle is back and is back with a bang. He played a crucial role in scripting a victory for KXIP in last match against RCB. He will be the favorites of Dream11 players.

Hardik Pandya hasn't been much impressive and is a risky choice as Dream11 batsman.

Saurabh Tiwary was part of Mumbai Indian's Playing XI for 1st two matches and since then he hasn't been included in Playing XI.

Karun Nair got chance to prove himself in 4 matches of KXIP but he failed and thus has been dropped from Playing XI.

As Dream11 all-rounder it is advisable to go with only one all-rounder for this match. Except for Keiron Pollard none of the all-rounders from both the teams have been consistent in this IPL season.

Krunal Pandya has disappointed in almost all the matches while Glenn Maxwell has been a total failure in last 8 matches.

Jimmy Neesham and Krishnappa Gowtham have dropped from Playing XI of KXIP and are unlikely to be part of it even for this match. 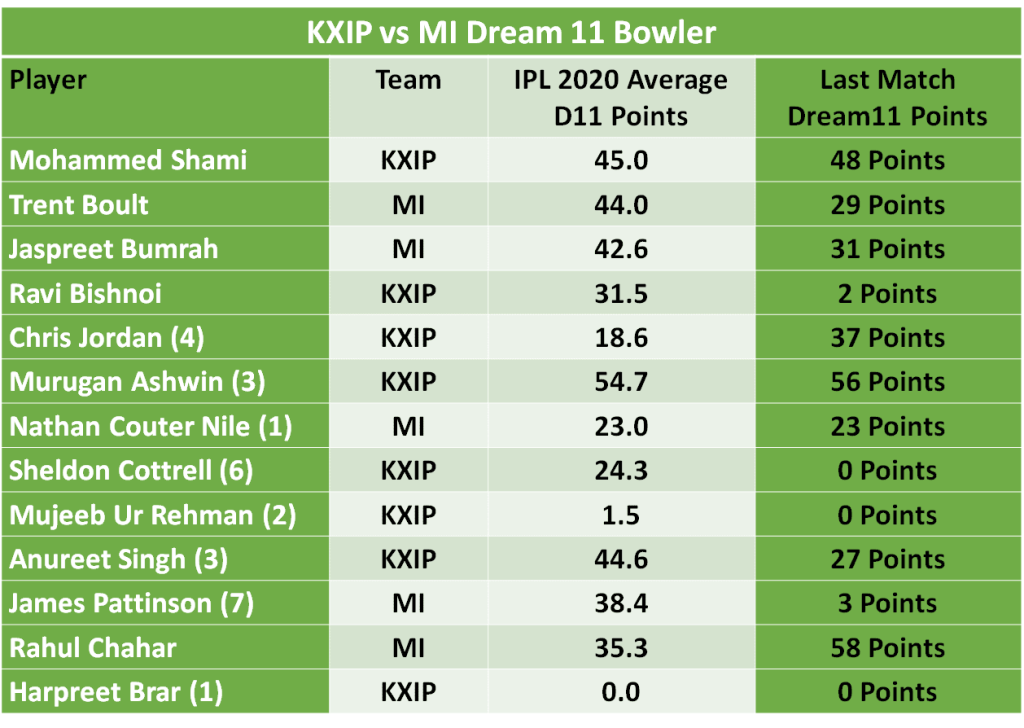 Both Mumbai Indians and KXIP have some of the classic bowlers. As Dream11 bowler, Mohammed Shami will be the very first choice and he will be followed by Trent Boult and Jasprit Bumrah for 2nd and 3rd Dream11 bowlers.

Ravi Bisnoi hasn't been very consistent which makes him a risky choice as Dream11 bowler.

Chris Jordan is yet to regain his mojo and Nathan Coulter Nile who replaced James Pattinson in match against KKR could not contribute much for his team.

Rahul Chahar has been in good form and is also an ideal choice as Dream11 bowler.

Murugan Ashwin is unlikely to make his spot in KXIP's playing Xi for this match.

Mujeeb ur Rahman was part of KXIP's Playing XI for 5th and 6th match respectively. However, his performance in both the matches were poor and was dropped in next match.

Mumbai Indian's haven't made much changes in their Playing XI. Bowlers like Mohsin Khan and Jayant Yadav are yet to find their place in Playing XI.