DC vs KKR Dream11 Team Predictions : Kolkata Knight Riders and Delhi Capitals will play their 11th match of IPL 2020 season tonight, 24th October 2020. Both the teams are coming off a defeat in their last match.

Delhi Capitals with 7 wins and 3 losses sits at the top in the points table and Kolkata with 5 wins and 5 losses are at 4th position in points table. From Kolkata's point of view this match is very crucial  . In last match against Royal Challengers Bangalore they were humiliated. If they lose this match, their chances of qualifying for the playoffs may fall apart.

Delhi Capitals on the other hand are comfortably placed to qualify for playoffs, however, in order to strengthen their position in points table they will be looking forward to defeat KKR. In last match despite a century by Shikhar Dhawan they lost to Kings XI Punjab.

Kolkata have played most of its IPL 2020 matches at Abu Dhabi. Of 10 matches, KKR have played 7 matches at Abu Dhabi and the match against DC on Saturday will be their 8th match at this stadium.KKR have won 4 matches here. They defeated Sunrisers Hyderabad twice, Chennai Super Kings and Kings XI Punjab one time each. They lost to Mumbai Indians, Royal Challengers Bangalore and Delhi Capitals.

Delhi Capitals have played 4 matches at Sheikh Zayed Stadium in this IPL season. They won two and lost two. They defeated Rajasthan Royals and KKR and lost to SRH and Mumbai. This match will be their 5th match at Abu Dhabi.

Note : The below table shows the Dream11 points from all the matches played at Abu Dhabi in IPL 2020.

DC vs KKR Dream11 Team Predictions : Players who failed to Perform in IPL 2020

After analyzing the performance of each players from both the teams, the ideal Dream11 team combination for this match would be 1WK, 4 Batman, 2 All rounder and 4 Bowler.

After being out due to injury for 3 matches, Rishabh Pant is back in DC's Playing XI. His return has surely boosted their middle order batting. As a Dream11 wicket keeper, he will be the first choice.

Dinesh Karthik hasn't been impressive with his performance. In order to concentrate on his performance he gave up KKR's captaincy. However, he is still struggling with his form. To have him in Dream11 team will be a risky option.

Alex Carey has been dropped after return of Pant and is unlikely to be part of DC's Playing XI. 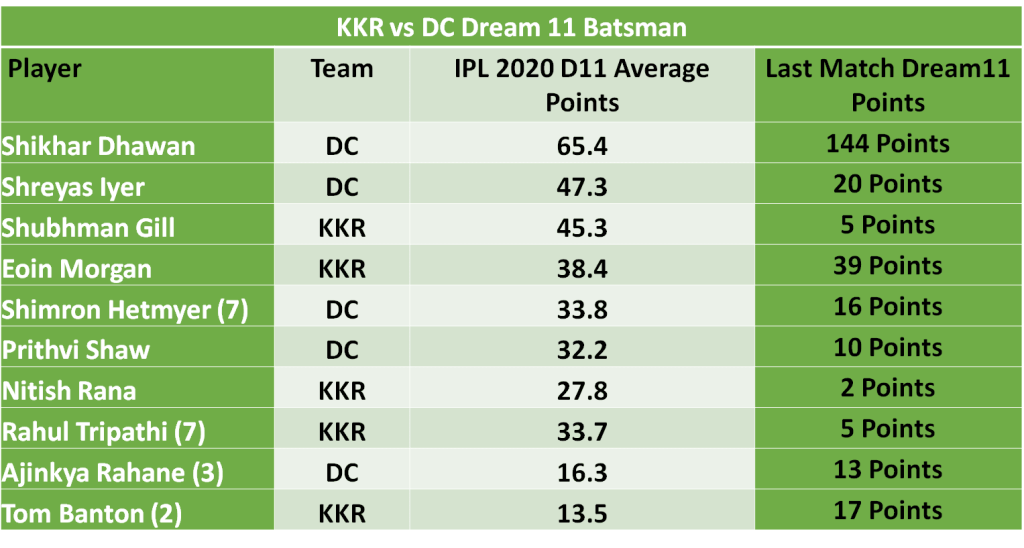 Shikhar Dhawan delivered back to back two centuries in last two matches. First he scored 101 runs against CSK and in 2nd he scored 106 runs against Kings XI Punjab. He has been outstanding in last few matches. As for Dream11 team is concerned, he will be the first choice as Dream11 batsman.

His teammate and Delhi Capital's captain Shreyas Iyer too is having an excellent IPL season. He averages over 47 Dream11 points per match and is best suited as 2nd Dream11 batsman.

Shubhman Gill from KKR has been impressive with his batting this season. In last match against RCB he could not contribute much for his team but in most of the matches that he played in IPL 2020 season he has been in good touch. He will be an asset as a Dream11 batsman.

As far as Dream11 all-rounder is concerned, Marcus Stoinis from Delhi Capitals will be first preferred choice. He averages close to 47 Dream11 points and has been excellent with both batting and bowling.

Second to Stoinis will be his teammate and an excellent all-rounder Axar Patel. Axar has been part of some of the best innings for DC this season and helped them script victory. 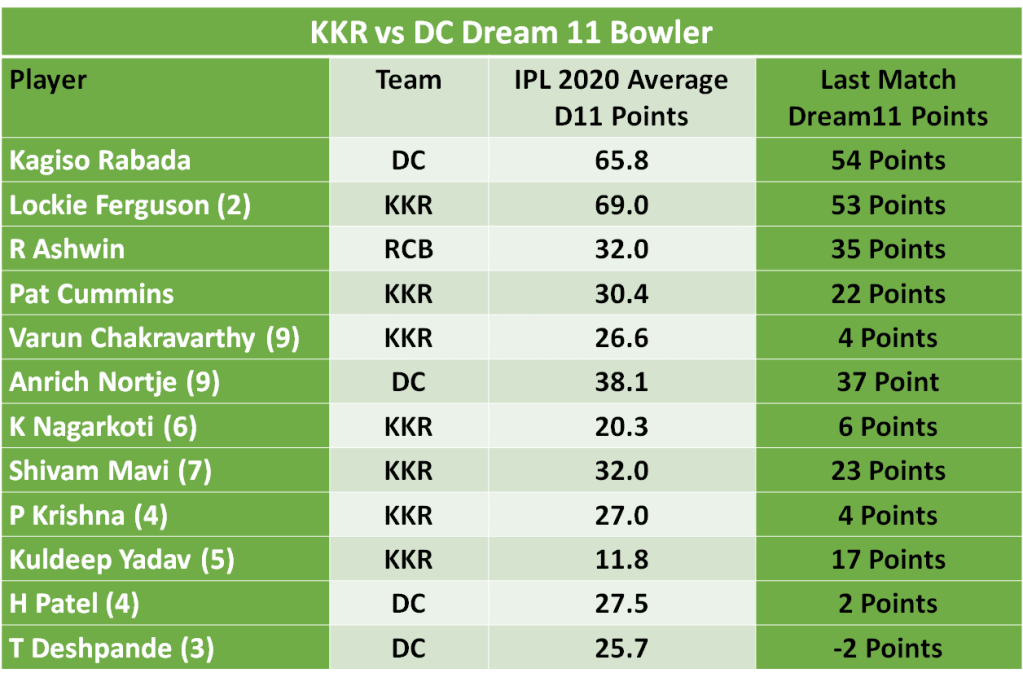 Kagiso Rabada has been exceptional this IPL season. He averages whopping 66 Dream11 points per match and he will be the best choice as Dream11 bowler. Even in last match when DC lost to KXIP he delivered 54 Dream11 points.

Lockie Ferguson who has been part of KKR's Playing XI has shown his intent to perform in both the matches. In last match when KKR was humiliated by RCB, Ferguson showed that he can even bat. He is an ideal choice as Dream11 bowler.

Ravichandran Ashwin and Pat Cummins the two spinners from DC and KKR respectively have had an good IPL 2020 season. Together they average close to 63 Dream11 points and are good choices as 3rd and 4th Dream11 team bowlers.

Anrich Nortje the pacer from DC was dropped from Playing XI in last match against KXIP.

Shivam Mavi hasn't been impressive at at all while Kamlesh Nagarkoti was back in KKR's Playing XI but he failed again.