SRH vs KXIP Dream11 Team Predictions : The two teams Sunrisers Hyderabad and Kings XI Punjab will be face each other in 43rd match of Indian Premier League IPL 2020 on 24th October 2020.

Both the teams are eyeing the playoffs spot. They have already played 10 matches each and have won 4 matches each and lost 6 matches. For them to qualify for the last 4 they need to win all the remaining 4 matches. Therefore, this match can be expected to be a highly competitive one.

Since Gayle has been back in KXIP's Playing XI after injury, KXIP are having a 3-match undefeated streak. Hyderabad on the other hand after 3 consecutive losses defeated Rajasthan Royals by 8 wickets in last match.

The two teams will meet each other at Dubai International Cricket Stadium.

Kings XI Punjab too have played 6 matches at Dubai. They won three matches and lost 3 matches. Their last two wins in IPL 2020 that is against Mumbai Indians and Delhi Capitals was in Dubai itself.

Note : The Dream11 points in below table is from all the matches played at Dubai by all the teams participating in IPL 2020

After analyzing the performance of players from both the teams, the best Dream11 team combination for this match would be :

Both KXIP and SRH have the best wicket keeper batsman of IPL 2020. Captain KL Rahul of KXIP has been exceptional with his batting as well as wicket keeping. He is undoubtedly the very first choice as Dream11 wicket keeper.

Next to him will be SRH's star wicket keeper Jonny Bairstow. Bairstow is known for his hard hitting batting and in this IPL season he averages close to 52 Dream11 points per match. He is a good choice as Dream11 wicket keeper.

Nicholas Pooran is one player who has been consistent with his form. In last match against Delhi Capitals it was his half century which helped KXIP defeat the No. 1 team in IPL 2020 Points table, DC.

With in-form batsmen like Mayank Agarwal, Chris Gayle, David Warner and Manish Pandey, the Dream11 players are sure to have a tough time deciding the best for their team.

Mayank Agarwal barring a few matches has been in excellent form. He has been a great support to KL Rahul. He is surely the first option as Dream11 batsman.

Since Chris Gayle has been back to KXIP's Playing XI they have won all the matches. He has performed in all the three matches that he played. He is surely the one who cannot be missed in Dream11 team.

David Warner too is having a good IPL season. Though he failed in last match against RR, he has contributed a lot for his team in this IPL season. He at present averages close to 48 Dream11 per match and this makes him the third best choice as Dream11 batsman.

Manish Pandey played an exceptional inning in last match against RR. He will be an ideal choice for 4th Dream11 batsman.

Kane Williamson has had an average IPL 2020 season till date. He is bit unreliable as Dream11 batsman.

Priyam Garg has disappointed even after repeated opportunity. He will be a risk choice as Dream11 batsman. 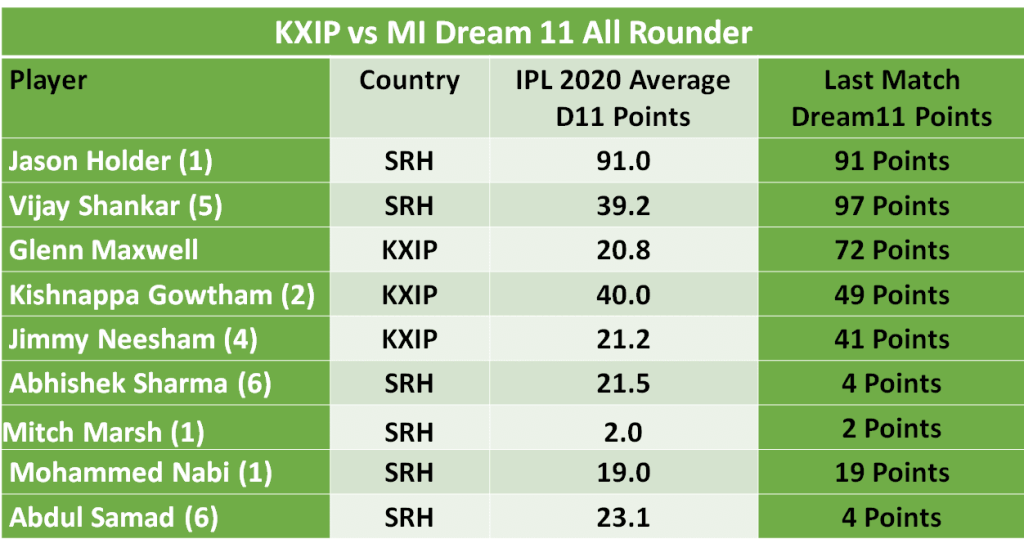 Having an ideal Dream11 all-rounder will be the toughest task. None of the all-rounders from both the teams have shown a good performance this IPL season.

In last match Vijay Shankar batted extremely well but has failed completely in 4 matches prior to it.

Glenn Maxwell has been completely out of form this IPL season and is always a risk to have him in Dream11 team.

Jason Holder was part of Hyderabad's Playing XI and he was exceptional picking up 3 wickets and delivering 91 Dream11 points. However, lack of experience in this IPL season makes him a difficult choice.

Abdul Samad who was included in last two matches after being dropped from SRH's Playing XI failed in both the matches.

Therefore, for this match it is advisable to just one Dream11 all-rounder. 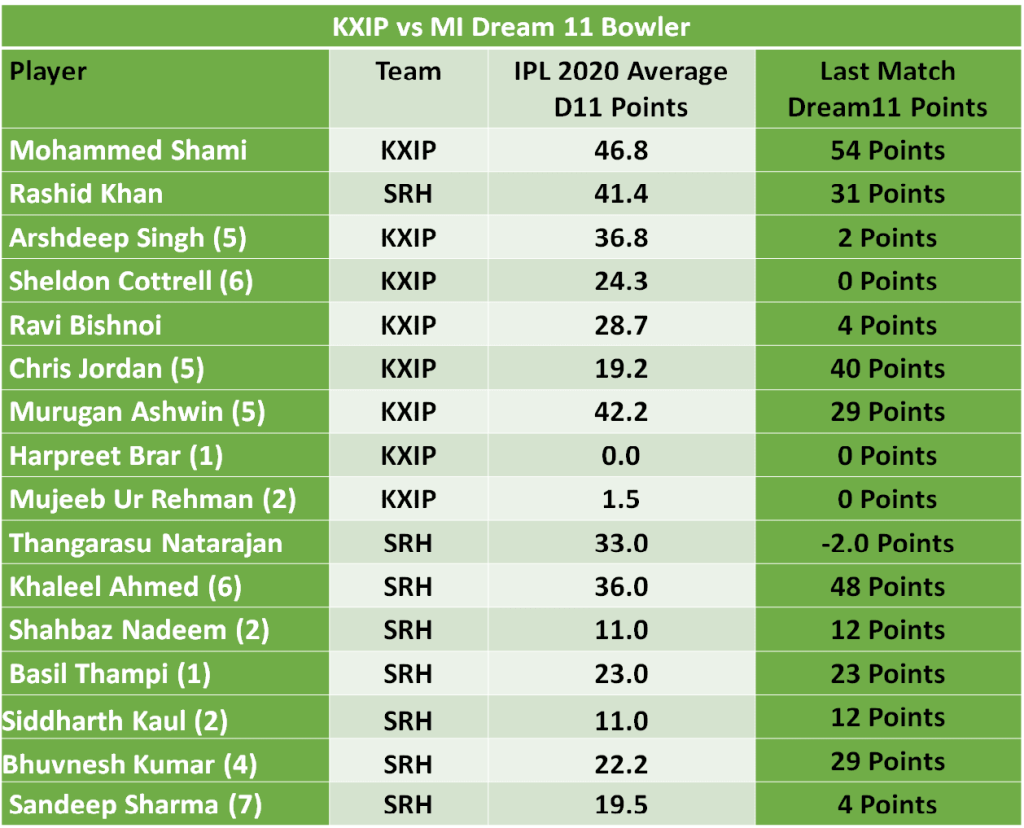 Both SRH and KXIP have made number of changes in order to find the best bowling combination. It is expected that both the teams will go with unchanged side for this match.

As a Dream11 bowler, the very first choice will be the KXIP's pacer Mohammed Shami who averages close to 47 Dream11 points per match this IPL season.

Young Arshdeep Singh who has 6 wicket in 5 matches will be the best pair for Shami as Dream11 bowler. In last match though he failed to deliver but he has been consistent with his bowling in rest of the other matches.

Hyderabad's star bowler Rashid Khan will be a great asset as 3rd Dream11 bowler. He averages close to 42 Dream11 points per match.

Sheldon Cottrell and Mujeeb ur Rahman from KXIP are unlikely to play in this match. Bhuvneshwar Kumar too won't be part of SRH's Playing XI.