KKR vs CSK Dream11 Team Predictions : Kolkata Knight Riders (KKR) sits at a point where to qualify for the playoffs it needs to win both the remaining leagues matches and also hope that Kings XI Punjab (KXIP) lose one of their last two matches.

Chennai Super Kings (CSK) on the other hands have nothing to lose as they are not in position to qualify for the playoffs. Thursday's match will be a do or die situation for KKR. CSK on the other hand would be looking to end their Indian Premier League 2020 campaign on a winning note.

KKR will meet CSK on 29th October 2020 at Dubai International Cricket Stadium. The match is scheduled at 7:30 PM.

One of KKR's biggest problems today will be that they haven't played on this ground in nearly a month.

Sam Curran has been the most consistent player for CSK on this ground followed by Ambati Rayudu. Deepak Chahar and Shardul Thakur would come next. Some players have performed well in one game - Ruturaj Gaikwad, Ravi Jadeja and Dwayne Bravo

Looking at the best opening options in both teams  - Shubhman Gill would be compulsory option, One of the two - Nitish Rana/ R Gaikwad

NOTE : The points below are from all the matches played at Dubai in IPL 2020 seasn by the all the teams. 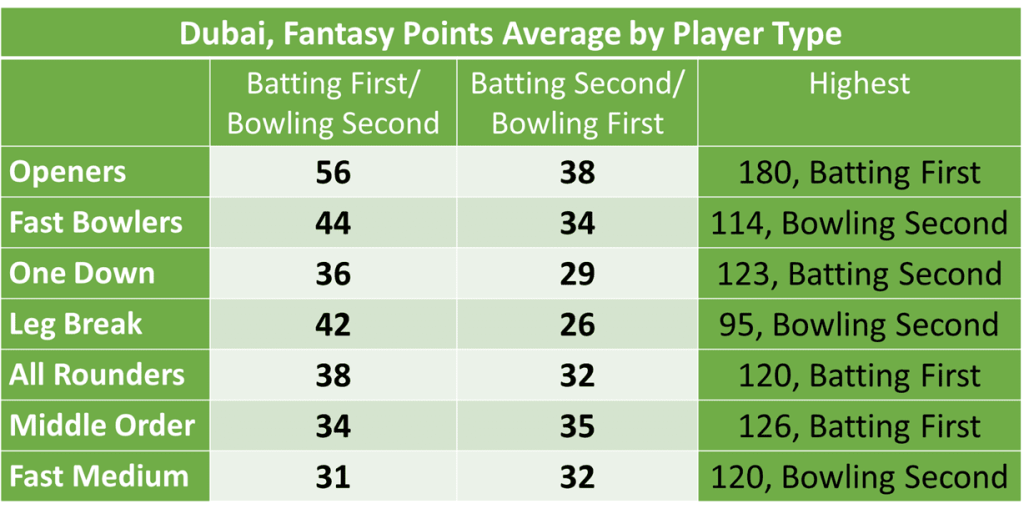 After analyzing the performance of each players from both teams, the ideal Dream11 team for the match should include 1 WK, 4 Batsman, 2 All Rounder and 4 Bowlers. 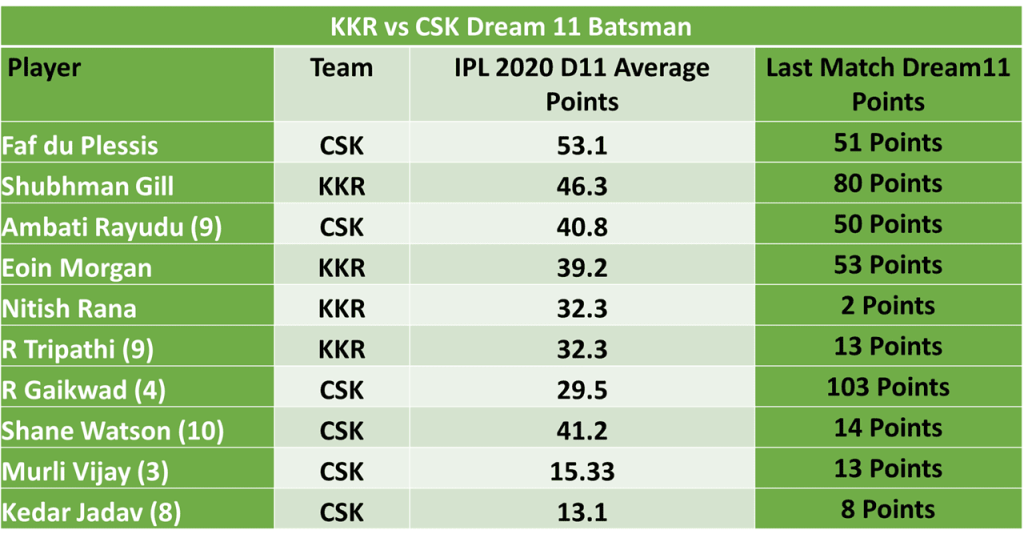 Wicket Keepers from both the teams are having a hard time in IPL 2020 season. CSK captain MS Dhoni has struggled in most of the matches while KKR's wicket keeper and former Captain Dinesh Karthik failed in almost all the matches.

For Dream11 team, it is advisable to have only one wicket keeper for this match. 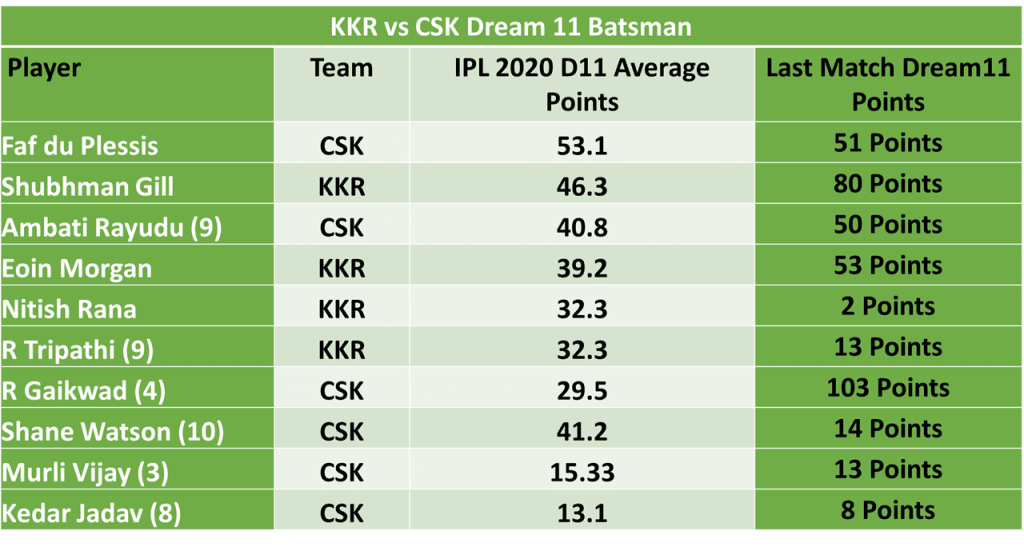 In batting the very first choice as Dream11 batsman would be CSK's Faf du Plessis. Faf has been one of the most consistent batsman of this IPL season. With 401 runs in 12 matches this season he averages over 40 runs per match.

Next to Faf will be young prodigy from KKR, Shubman Gill. Gill due to his performance has been able to make to India's ODI squad for Australian tour. This IPL season he delivered over 46 Dream11 points per match and is an ideal choice for Dream11 batsman.

Ambati Rayadu who missed 3 matches this IPL season due to injury has been in good form. Though in some matches he failed but overall he has had a good IPL 2020 season and is also a good choice as Dream11 batsman.

KKR's captain Eoin Morgan can also be preferred in Dream11 team as a batsman. His strike rate has been brilliant this IPL season that is just over 131. He averages close to 40 Dream11 points per match.

Raturaj Gaikwad who has been included in CSK's Playing XI in last two matches played a winning knock in CSK's last match against Bangalore. He has shown a great potential as a batsman and would be an asset in a Dream11 team.

Nitish Rana and Rahul Tripathi though the regulars in KKR's Playing XI haven't been impressive enough barring one or two performances. They will be risky choice as Dream11 batsman.

Two CSK's teammates Sam Curran and Ravindra Jadeja will be the best choice as Dream11 all-rounders.

Sam Curran has been great with both bat as well as bowling. He has scored a total of 173 runs and has already taken 13 wickets this IPL season. He averages over 51 Dream11 points per match this season.

Ravindra Jadeja on the other hand has 4 wickets and 201 runs to his name in this IPL season.

The inclusion of Mitchell Santner has been good choice from CSK's point of view. He is a great all-rounder and can be preferred as a 3rd all rounder in Dream11 team.

Andre Russell and Dwayne Bravo is out due to injury. Sunil Narine was again included in KKR's Playing XI but he failed once again. 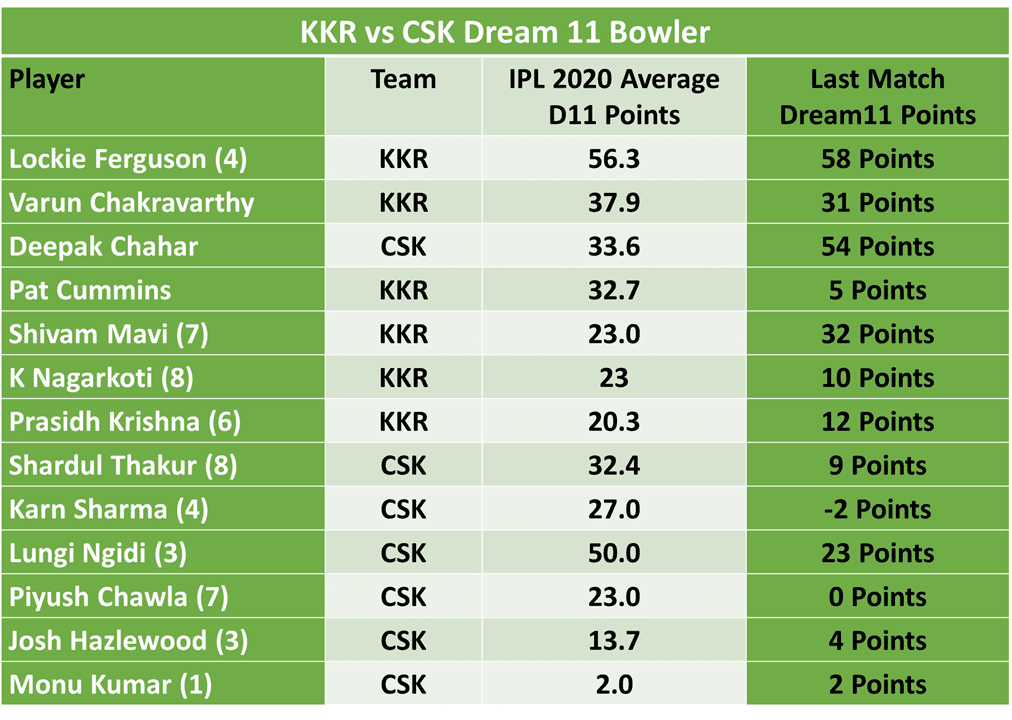 Lockie Ferguson has been a class bowler for KKR. He has been part of KKR's Playing XI for last 4 matches and he delivered over 56 Dream11 points per match. He is the first choice as Dream11 bowler.

Next to Lockie will be his teammate Varun Chakravarthy. Varun has been consistent with his bowling form and has taken 13 wickets in 11 matches that he played this season.

The Right-hand medium pacer Deepak Chahar is also having a good IPL 2020 season. He already has 12 wickets in 12 matches to his name and averages over 33 Dream11 points this season.

The Australian right hand fast bowler Pat Cummins hasn't been much impressive with bowling but has contributed 131 runs with his bat this season. With total 6 wickets and 131 runs in 12 matches he delivered almost 33 Dream11 points per match this IPL season.

Kamlesh Nagarkoti despite repeated chances is yet to deliver a good performance. He is a risky choice as Dream11 bowler.