KXIP vs RR Dream11 Team Predictions : With leagues matches nearing end, Indian Premier League has turned out to be highly exciting. Kings XI Punjab will play Rajasthan Royals in 50th match of IPL 2020. Both teams are eyeing a spot in Playoffs. Punjab after a devastating first half are on a five match wining streak in 2nd half of their IPL 2020 campaign. They need to win the next two matches to qualify for the playoffs.

Rajasthan Royals have 5 wins in 12 matches and if they win both of their last 2 matches they may have a chance to qualify for the last two.

This match which will be played at Sheikh Zayed Stadium, Abu Dhabi turns out to be very much crucial for both the teams. Prior to this match, the two teams have clashed against each other once in this IPL season. Rajasthan beat Punjab by 4 wickets.

Kings XI Punjab KXIP haven't had a good experience at Abu Dhabi this season. They played two matches here in IPL 2020 and lost both the matches.

Rajasthan Royals on the other hand have played 5 matches at Abu Dhabi in this seasons IPL. They lost 3 matches and won 2. The last match that they played at Abu Dhabi was against Mumbai Indians which they won by 8 wickets in a high scoring match.

NOTE : The Dream11 points in below table are from all the matches played at Abu Dhabi in IPL 2020 season.

After analyzing the performance of each players from both teams, the ideal Dream11 team combination for this match would be :

Find out which team among the two looks strong for this match. Read our KXIP vs RR Predictions and Betting Analysis

Both KXIP and RR have some of the best wicket keeper batsman of this IPL season. Punjab's captain KL Rahul with an average of over 59 runs per match have scored 450 runs in this season till date. He will be the first choice as Dream11 wicket keeper.

Sanju Samson from Rajasthan Royals too have been in top form this IPL season. He averages over 45 Dream11 points per match and in last match he gave 76 Dream11 points. He is one of the best choice as wicket keeper for Dream11 team.

Nicolas Pooran too has been consistent with his performance. He is also an ideal choice as Dream11 wicket keeper.

Jos Buttler has disappointed with his batting in this IPL season. Barring one match, he has failed in almost all the matches that he played in IPL 2020 season. He will be quite a risky choice as Dream11 wicket keeper.

Mandeep Singh has been part of KXIP's Playing XI in last two matches instead of Mayank Agarwal. In last match against Sunrisers Hyderabad he was Player of the Match. As a Dream11 batsman he is a good choice.

Next to Mandeep will be none other than Universe Boss, Chris Gayle. Since Gayle returned to Playing XI of Punjab they have not lost any match. As a batsman Gayle has been outstanding and already has 2 half centuries to his name this IPL season. In all he has delivered close to 59 Dream11 points per match till now.

Riyan Parag has disappointed and so has Deepak Hooda. David Miller may not find his spot in RR's Playing XI for this match.

In case of KXIP, all rounders have failed to impress. Glenn Maxwell has been completely out of form while Jimmy Neesham has not been included in Playing XI since last couple of matches.

Next to Stokes will be his teammate, Rahul Tewatia. Tewatia has had quite a good IPL season. He has taken 7 wickets and scored 224 runs in 12 matches that he played in IPL 2020. He can be preferred as 2nd Dream11 all rounder.

Krishnappa Gowtham may not find his place in Playing XI of KXIP. 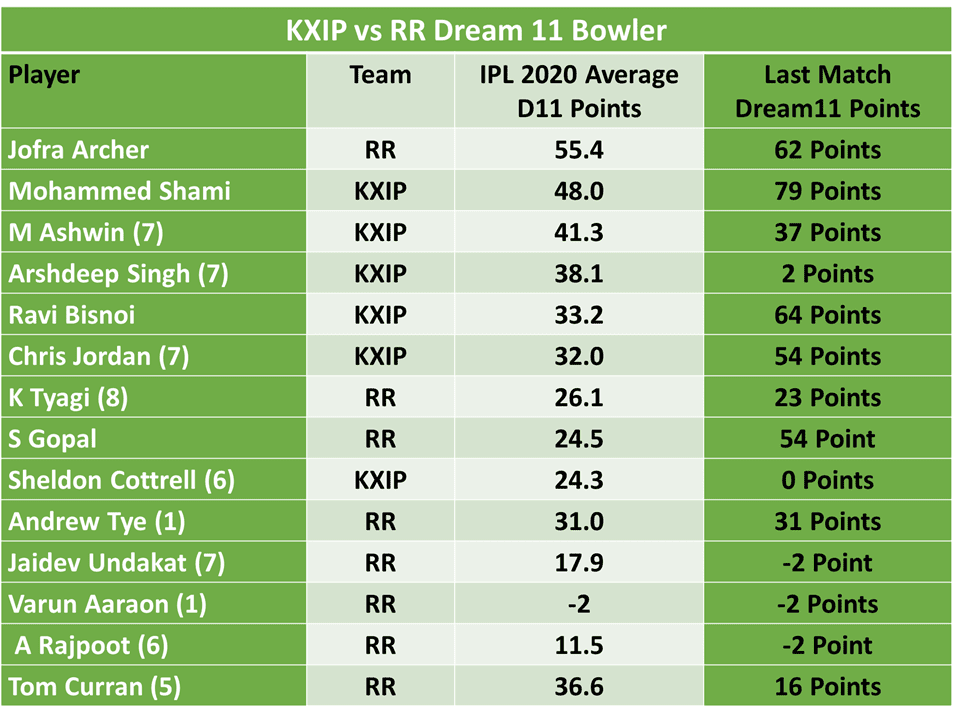 Dream11 players have ample of options for Dream11 bowlers for this match. From Jofra Archer to Chris Jordan all are having a great IPL 2020 season.

For Dream11 team, Jorfra Archer will be the first choice as bowler. Archer averages over 55 Dream11 points this season and have been impressive in all the matches that he played this IPL season.

Mohammad Shami from KXIP too has the similar story like Jofra. He has been outstanding with his bowling this IPL season. At a strike rate of 14.0 he has taken 20 wickets in 12 matches to IPL 2020 season. He will be an asset as a Dream11 bowler.

Murugan Ashwin with his spin bowling has impressed everyone. Having him as a 3rd bowler in Dream11 team will be a good deal.

Chris Jordan is back in form. He has shown some excellent bowling performance in last few matches and he too can be considered in Dream11 team.

Sheldon Cottrell has been out due to injury and Andrew Tye has played only match this IPL season.