KKR vs RR Dream11 Team Predictions : With just last few league matches to be played in this season's Indian Premier League three teams KXIP, KKR and RR are tied with same points and are left with 1 match each.With Rajasthan Royals defeating Kings XI Punjab on Friday they are now very much in fray to qualify for the playoffs. A win in match against KKR on Sunday will boost their chances. KKR on the other hand too have same points as that of RR.

A win against them with a greater margin will increase their chance of entering the qualifiers. Therefore, Sundays match is nothing less than a virtual knockout match for both the teams.The two teams will play against each other at Dubai International Stadium and the live streaming will begin from 7:30 PM IST.

Kolkata have played only two of their IPL 2020's 13 matches at Dubai. They won the first match against Rajasthan while lost the second against Chennai Super Kings.

Rajasthan Royals have played 4 of the 13 matches so far at Dubai. First match they lost against KKR. In 2nd match Delhi Capitals defeated them. Bounced back to win against Royal Challengers Bangalore which was followed by a defeat against Sunrisers Hyderabad.

NOTE : The points in the below table are from all the matches played at Dubai this IPL season.

After analyzing the performance of each players from both the teams, the ideal Dream11 team for this match should have 1 WK, 4 Batsman, 2 All Rounders and 4 Bowlers.

Get the IPL 2020 stats for Each Players and teams Here

Neither Jos Buttler from Rajasthan Royals nor Dinesh Karthik from KKR have been able to make a big impact in this IPL season. Both have failed miserably and are very risky choice as Dream11 wicket keeper.

Rajasthan Royal's Sanju Samson has shown some class batting performance. He has delivered close to 47 Dream11 points per match this IPL season and is best suited to be part of Dream11 team. 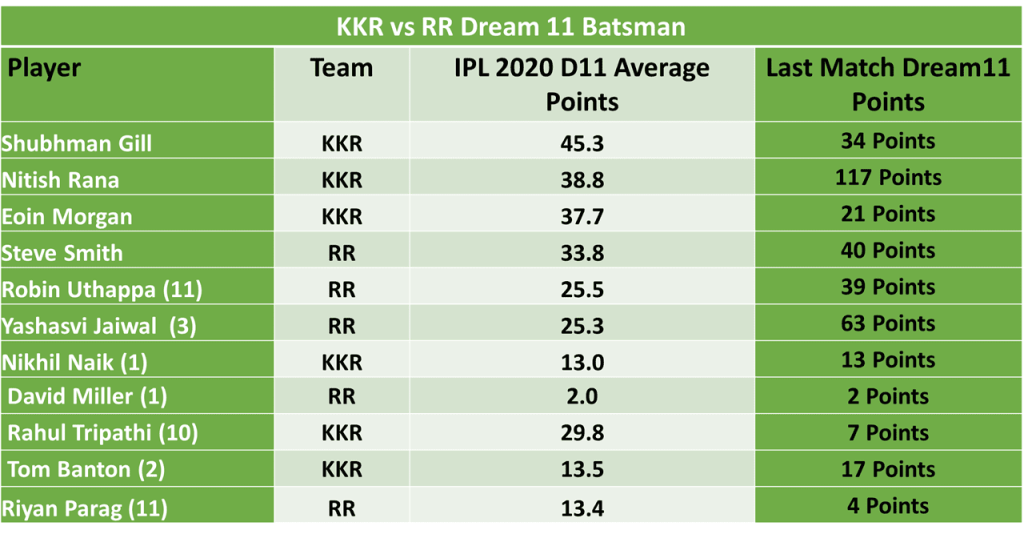 Nitish Rana has played good few innings. In last match he gave a whopping 117 Dream11 points. He too can be considered as batsman in Dream11 team.

KKR's Captain, Eoin Morgan hasn't played a big inning in this IPL season. However, he has contributed to aid his team win match. He is also a good choice.

As fourth Dream11 team batsman, one from Steve Smith and Robin Uthappa can be considered.

Rahul Tripathi who has been part of KKR's Playing XI from 10 matches in Indian Premier League IPL 2020 would not be good choice as Dream11 batsman.

Two all rounders from RR, Rahul Tewatia and Ben Stokes solves the issue to having a consistent all-rounder in Dream11 team.

Sunil Narine hasn't been much impressive as an all-rounder while Andre Russell is out due to injury. 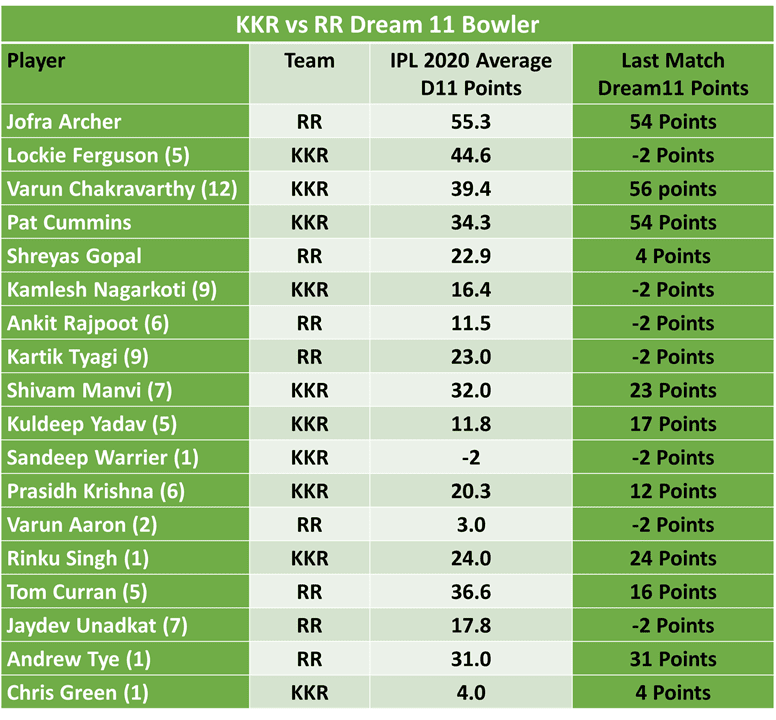 Jofra Archer has been quite impressive in this IPL season. He averages over 55 Dream11 points and will be the first choice as Dream11 bowler.

Next to Jofra will be Lockie Ferguson from KKR. Lockie has played only 5 matches for KKR this and has been able to prove his worth. He will be a good choice as Dream11 bowler.

Varun Chakravarthy has taken the responsibility of KKR's bowling line up. He has been quite impressive with his bowling till now in IPL 2020.

Pat Cummins has been consistent with ball. He averages close to 35 Dream11 and could be considered as 4th bowler for Dream11 team.

Shreyas Gopal has disappointed with his performance while Prasidh Krishan's lack of experience this IPL season makes him a risky choice as bowler for Dream11 team.

Players like Jaydev Unadkat, Kuldeep Yadav and Tom Curran have less chances to be considered in Playing XI of their respective teams for this match.

Shivam Mavi too has been dropped from KKR's Playing XI after repeated failures. Rinku Singh got an opportunity in match against CSK but could not make much difference.

Prasidh Krishna too hasn't been able to deliver a good inning so far for KKR.