The Broncos desperately need a victory to have any chance at the playoffs while Raiders with 5 wins and 3 losses are comfortably placed to make for the playoffs.

The match between Raiders and Broncos is scheduled for Sunday, Nov. 15, 2020 at 2:05 p.m. Arizona time. At present Raiders are on a two matches winning streak while Broncos are coming off a defeat at the hands of Atlanta Falcons. 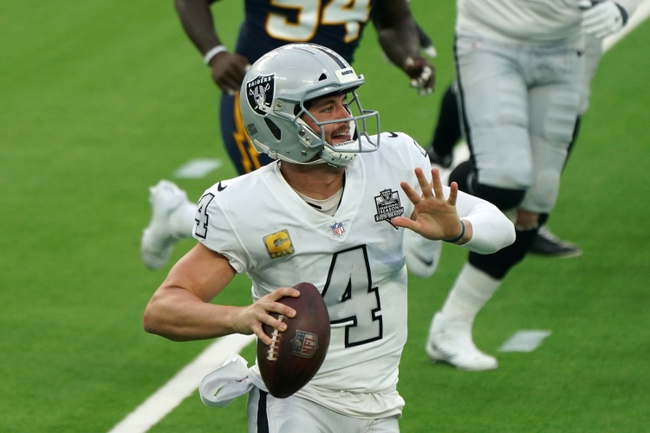 Raiders vs Broncos NFL Odds and Predictions : Performance in NFL 2020

Denver Broncos are having a bad NFL 2020 season. They started off their NFL 2020 campaign with a loss against Tennessee Titans and then faced back to back two more losses against Steelers and Buccaneers.

They registered their first win of NFL 2020 against New York Jets in their 4th week of NFL 2020 campaign. The Broncos continued their winning steak against Patriots but had to face a defeat in very next game against Kansas City Chiefs.

In last two matches they beat Los Angeles Charges and lost against the Atlanta Falcons by a score of 27-34.

Los Vegas Raiders have been of fire this NFL season. The started off with a win against Carolina Panthers and then defeated Saints and Patriots in next two NFL games. They faced their first defeat at the hands of Buffalo Bills.

In 5th match of this season they went on beat Kansas City Chiefs but suffered a humiliating defeat at the hands of Tampa Bay Buccaneers in their 6th Week of NFL. The Raiders are undefeated in last two matches. In 8th match they beat Cleveland Browns and in Week 9, the Raiders took flight to Los Angeles and beat Los Angeles Chargers by 31-26 score.

For Raiders, the Quarter Back Derek Carr registered his sixth game with a passer rating over 100 points.

Broncos vs Raiders NFL Bets and Predictions : Head to Head

The Broncos and Chargers have come face to face on 119 occasions as of now. The Raiders also hold a lead in the all-time regular season series against the Broncos.

The Raiders have won 64 games while Broncos have won 53 times when these two teams met. Two matches between the two teams ended in tie.

As per CBS Sports, "The Raiders haven't been dominating the Broncos on the scoreboard over the past few years but they have been covering". According to them, the final score of the match is expected to be Raiders 31, Broncos 20.

According to Sportsnaut both the Broncos and Raiders remain very much alive in the AFC Playoff race. The final score of the match as predicted by them is Raiders 27, Broncos 23

Smarkets predicts an easy win for Riders in the match. As per them, Raiders have 66.23% chances of winning the upcoming Sunday afternoon match against Broncos while Broncos have only 32.79% chances of win.