Rams vs 49ers Odds and Predictions : 49ers Favorites to Win

Rams vs 49ers Odds and Predictions : 49ers Favorites to Win

With 6 more games to go for both the teams, 49ers are holding on to slim chance of making into the playoffs. They cannot afford to lose the Sunday's game against Rams. A defeat will further push them away from NCF playoffs picture.

Rams on the other hand are on 2 game winning streak and have won 7 matches and lost just 3 matches in this NFL season. Los Angeles Rams is very much placed in a position to make it to the playoffs.

This Sunday, the two teams will meet each other at SoFi Stadium, a stadium and entertainment complex in Inglewood, California. Rams are coming off a win in last match against Tampa Bay Buccaneers while San Francisco 49ers lost their last NFL game against New Orleans Saints.

San Francisco 49ers (4-6) started off NFL 2020 campaign with defeat at the hands of Arizona Cardinals. They bounced back by winning their next two matches against New York Jets and New York Giants. By the end of 5th week they were at 49ers 2-3 before beating the Rams in 6th Week.

However, in last of their NFL 2020 games, the 49ers have managed to win only one match. In last match against the New Orleans Saints beat them by a score difference of 27-13 points.

Los Angeles Rams have been on a roll this NFL season. In first five matches of this season, they had won 4 matches and lost only one to Buffalo Bills taking their tally to Rams 4-1 in first five weeks. In 6th week of their NFL San Francisco 49ers crushed them by a score difference of 24-16.

Since then the two teams have met each other 142 times in both regular and post season game. San Francisco 49ers with 72 games win have had an edge over the Rams in all time head to head clashes. Rams on the other hand have won 67 games while 3 matches between them ended in a tie.

Last time these two teams met was in 6th week of NFL 2020. 49ers emerged victorious in this match.

In last five clashes, 49ers have won on 3 occasions and Rams have defeated 49ers on 2 occasions.

49ers vs Rams Odds and Predictions : Players to Watch Out

San Francisco 49ers have already had their three of their QB's play in this NFL season. With no sign of Jimmy Garoppolo returning for this match, the 49ers may start with with anyone of  Nick Mullens and C.J. Beathard. However, both haven't been impressive enough to be considered as hopes for 49ers. 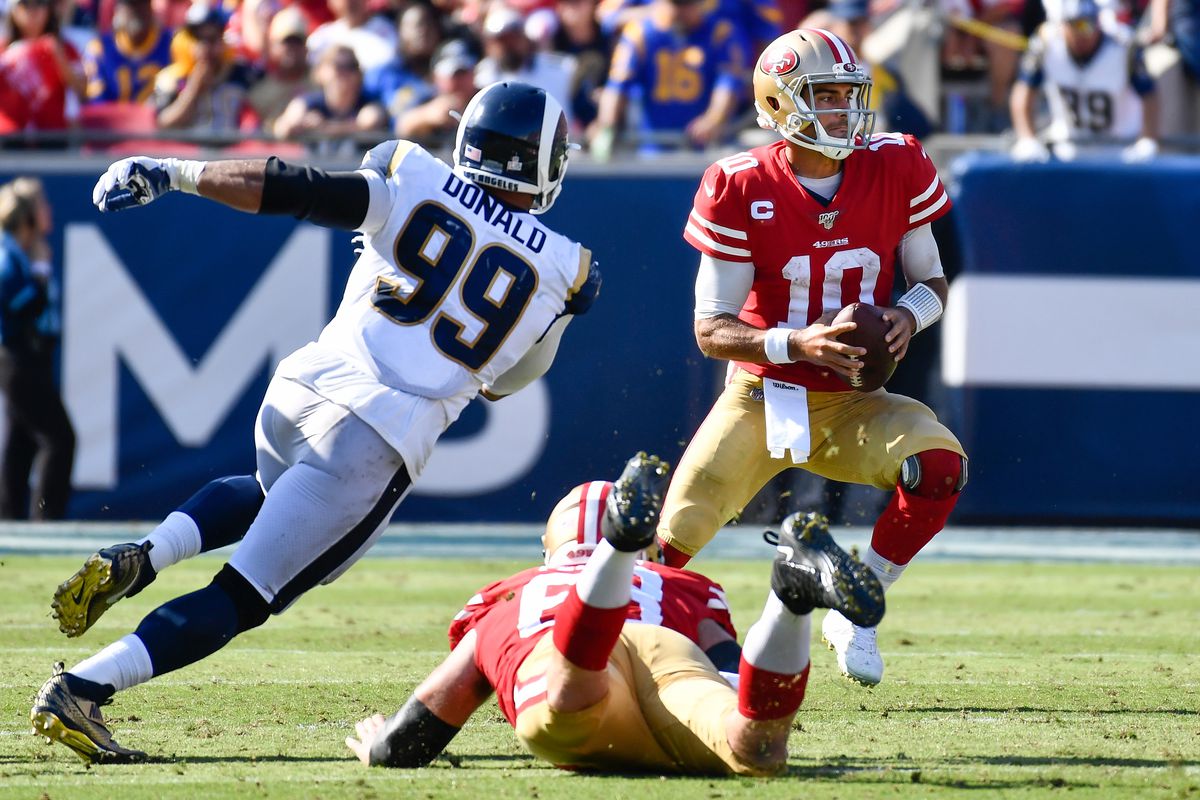 With Raheem Mostert likely to return the 49ers may have to pan their hopes on this running back. However, it must be remembered that Raheem has missed more games than he’s played this NFL season. 49ers head coach Kyle Shanahan stated last week that he is hopeful of Raheem's return for match against Rams.

Eyes will be on wide receiver Deebo Samuel who had 6 reception in last game against the Saints.

Quarterback Jared Goff has been in exceptional form this NFL season. In last match against the Buccaneers, Goff threw for 376 yards, 3 Touchdowns.

If 49ers are to win this game they need to shut Rams defensive tackle Aaron Donald. They were successful in last game between the two teams which help them defeat the Rams.

Aaron Donald will be supported by Linebacker Micah Kiser and Cornerback Darius Williams who had 4 successful tackles in last game.

Following past and recent record between the two team, the prediction and betting platforms are divided over the favorites for this game.

A leading betting platform, Smarkets have Rams team on winning side. As per them the betting odds for Rams as of now stands at 1.31 while for 49ers the odds are 3.15 as of now.

According to Sportsnaut, 49ers have edge over the Rams. As per them, 49ers have won three consecutive against Jared Goff and Co. Despite the Rams’ status as a conference title contender and heavy favorite heading into Week 12, they predict the final score to be  49ers 27, Rams 24.